Eight mistakes led to this war:

But those events are past and current bloodshed cannot be stopped by allocating blame. Instead, a few other options may exist or shortly emerge, depending on how the war goes: While Ukraine is winning, it may not be interested in a ceasefire, but Russian citizens can organize a civil resistance movement. This will be hard, since they cannot communicate freely.

If Russia starts winning, Ukraine can (a) evacuate as many as possible, including the government, (b) offer a ceasefire on Putin’s terms, while warning that © Ukrainians will resist nonviolently, as Danes did against Nazi occupiers and Czechs did against the Soviet occupiers, and (d) the rest of the world will maintain economic sanctions against Russia until it leaves. There are not enough Russian soldiers to occupy 44 million people, so Ukraine will win. 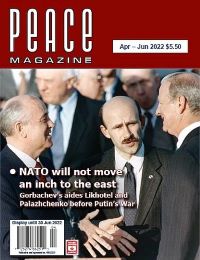