The world received its godawful report card this summer. The IPCC’s audit of humanity’s elimination of greenhouse gas was released early enough for all nations to prepare for their next meeting in November. In Glasgow they will promise again to reduce greenhouse gases, though most have received failing marks for their previous pledges. Read Smith’s and Fletcher’s sobering summary of that report card on pages 12-15. And weep.

But there are tidbits of good news elsewhere, and we should publicize each one instead of complaining that it is not a “silver bullet.” The only real silver bullet — a single change that could solve our climate crisis — would be the instant replacement of fossil fuels (the source of 80 percent of greenhouse gases) with safe, sustainable alternatives. That change is happening too slowly to be a silver bullet, so we need some “silver buckshot” too — measures that either curb emissions or even remove carbon that has already been emitted to the air.

But activists tend to downplay “silver buckshot” — innovations that can solve only, say, two percent of our problem. We worry that carbon emitters will adopt these small changes to “offset” the harms they continue perpetrating. Let’s stop allowing phonies to play the system. Let’s demand the elimination of fossil fuel use while also promoting each new “silver buckshot.” Here are four promising incremental changes that deserve enthusiasm.

Concrete is the most widely-used human-made substance on earth — and the source of between 4 and 8 percent of carbon dioxide emissions. It is typically made of aggregate (crushed rock and sand), mixed with a binder (Portland cement) and water, to form a fluid slurry that becomes as hard as stone over time. The Portland cement is made by super-heating limestone (mainly calcium carbonate) with clay or shale and grinding it with sulfate. The production is a huge source of CO2.

But now a California company called Blue Planet is making aggregate from captured CO2! They collect the CO2, dissolve it to form a carbonate, which they combine with rock or waste concrete (sources of calcium), thereby producing calcium carbonate — i.e. synthetic limestone, to be used as aggregate in concrete.

This process is a breakthrough, eliminating both the heating of limestone to produce the Portland cement and any need to crush the product — synthetic limestone, which is simply formed into pebbles. Instead of being a major source of CO2 emissions, this process actually is carbon-negative; it mineralizes captured CO2 and stores it as a valuable building material where it cannot leak into the atmosphere.

We certainly hope that the company is correct in boasting that “If we replace just 16% of all aggregate used today with Blue Planet Aggregate, we could achieve the CO2 storage needed by 2050 to keep temperature rise below 1.5°C.”1

So, the next challenge may be to capture enough CO2 to do exactly that. If you own a smokestack, this may be your great opportunity. Moreover, it is possible that this technology, by creating a huge economic demand for CO2, will make “Direct Air Capture” into a financially viable large-scale project — which at present it is not.2

URBAN FORESTS INSTEAD OF LAWNS

There are now about three trillion trees on Planet Earth, and we need about one trillion more to absorb the excess carbon in our atmosphere. Unfortunately, deforestation is outrunning afforestation; we are net losing trees. The key solution is to reduce deforestation, but we must also plant new ones.

Researchers in Switzerland3 counted forest coverage of the world with maps and concluded that there is enough unused land to hold a trillion more trees, though their recommendations must be questioned as to where trees might be planted.

Yes, forests are increasing in the Arctic, but this is bad news, not good. Trees are dark and absorb heat in snowy areas that would otherwise reflect light and remain cold. When permafrost melts, ancient, iced vegetation and microbes revive and emit vast quantities of methane. Hence, we should exclude the Arctic from afforestation sites.

Besides, many of the places that the Swiss researchers included are remote and inaccessible to planters. Who would water and weed the saplings for the first two years? No, we must think again about where to plant.

But the Swiss excluded some good places — cities and farms, where there are people who could plant, water, and weed the new forests until they are established. And cities have lawns.

Americans, Canadians, and Australians are the top lawn owners (40 million acres in the US alone — more than the largest crop, corn). Every year American lawns consume nearly three trillion gallons of water, 200 million gallons of gas for mowing, and 70 million pounds of pesticides. If half of the lawns were converted to native plants, this area would exceed all the national parks in the lower 48 states. They kill pollinator insects and birds. If only half of our lawns were converted to dense urban forests, we could add about 15 billion trees.

That may sound like a lot, but a trillion is one thousand billion! We must plant far more. Okay. Canada has about one million kilometers of two-lane country roads. If we plant trees on both sides of them, that will add about 100 million more. And what if farmers plant trees along the fences of their fields? And don’t forget the parking spots in cities around the world.

Within ten years we will see driverless electric taxis everywhere. Indeed, rides will be so cheap that almost no city dwellers will own a vehicle anymore; they’ll just phone a cab, which will appear within one minute.4 There will also be delivery drones, driverless moving vans, and driverless carts on sidewalks, delivering cappuccinos from the café up the street. The average family is predicted to save $5,000 per year by giving up car ownership.

The best result of this will be the reduction of carbon emissions, but there are other benefits as well. The average car today is parked about 95 percent of the time, so every home has a parking space and there are parking lots all over town too. Driverless taxis will rarely park but just move on after dropping off a passenger. The streets may be crowded but parking lots and street parking spots will be empty — and can be converted to other uses. Now is the time to ask your city council to require that half of all unused parking spaces be filled with trees.

What a dilemma! Farmers depend on nitrogen fertilizer, though it is a major source of greenhouse gas. But now we can celebrate a new silver buckshot solution.

There are microbes in the soil that capture nitrogen from the atmosphere and deliver it to the plants to use as fertilizer, in exchange for sugar that the plants’ roots provide them to eat. However, the microbes are lazy; they produce this nitrogen only when their sensors detect its absence from the soil. If they would just keep on producing nitrogen ceaselessly, the farmers could reduce their application of nitrogen fertilizer, with its bad side effects.

Now a company named Pivot Bio is using genomics to engineer the microbes. They change the microbes’ genes to shut off their sensors for detecting the presence or absence of nitrogen. So altered, the microbes never cease fixing nitrogen, regardless of the amount of fertilizer that has been spread around them. Pivot Bio coats these microbes onto the seeds before they are planted, and now the plants can get abundant nitrogen through their growing roots.

This innovation is only getting started and has displaced only a fraction of the regular amount of fertilizer — but that was enough in one year to prevent the application of 40 million pounds of fertilizer in the United States, which in turn prevented the emission of hundreds of millions of tons of CO2. Pivot Bio’s goal is to displace 100 percent of all nitrogen fertilizer applications with their engineered microbes. Good luck, Pivot Bio! 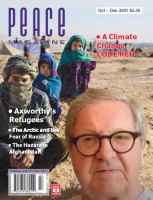