Project Save the World broadcasts live discussions every weekday. Here are excerpts from two recent shows.

This is a chat with Nick Ritchie, a professor at the University of York in England, Rebecca Johnson of the Acronym Institute, and Paul Meyer, former Canadian ambassador for disarmament.

NICK RITCHIE: After the Cold War ended, the UK stockpile reduced to the single nuclear weapons system that we currently have—Trident—which consists of four ballistic missile submarines armed with American designed-and-built Trident missiles and a stockpile of UK-designed-andbuilt nuclear warheads.

Reductions continued through the 2000s until the defense review of 2010, which planned to reduce the overall nuclear warheads stockpile from 225 down to 180 by the mid-2020s, and operationally available warheads down to about 120. Until a year and a half ago, government ministers were repeating this plan.

But now we get to this Integrated Review of Security, Defense, Development, and Foreign Policy, which has been in the works for about two years. It came out last week and to everyone’s surprise, this slow reduction of the nuclear warhead stockpile has been scrapped.

We haven’t reached that target of 180 of the total stockpiles yet—and we’re not going to. We’re going to stay where we are. The government said we’re going to lift that “cap” on the warhead stockpile. They never had said: “This is the number of warheads that we have.” They’d say, “Our stockpile will be no more than…” Now in the Integrated Review, they said that cap will be lifted to “no more than 260,” which is quite an uptick.

METTA SPENCER: Does that mean, “We were lower and we’re going to actually increase the number we have?” Or does it mean, “We’ve really had that many all along and we’re just not going to get rid of them?”

REBECCA JOHNSON: When we heard about the Integrated Review, some were arguing that it was not so much a U-turn as unmasking the policies that the UK Government always had. But there are the two crucial differences. One is Nick’s point—that we’re reserving the right to go up to at least 260 warheads. And second, they’re committing to have a nuclear-armed submarine at sea at all times. They basically changed the security assurances that UK has always given under the Non-Proliferation Treaty—that we would use nuclear weapons only in extreme circumstances, the very survival of our country. This time, they’ve said that we’ll review the assurance if there’s a threat of chemical and biological weapons, and even of “emerging technologies” that could have a “comparable impact.”

PAUL MEYER: Outside of the UK, I think, there’s a real sense of betrayal. There is already pressure on the continued viability of the NPT. For a nuclear weapon state to get more weapons rather than fewer just adds to the skepticism by the 185 non-nuclear weapon states parties to that treaty.

JOHNSON: Previous leaders have swaggered with nuclear weapons for many decades. And Boris is a swagger par excellence and nuclear weapons meet his criteria. Everybody thinks we’re big, we’re great, and we can destroy the entire world.

Paul Werbos developed the algorithm 50 years ago that is now the basis for neural network technology: how the brain works.

METTA SPENCER: A minute ago we were discussing whether God plays dice with the universe. You said you’d worried about that too but had solved it. So how did you solve it?

PAUL WERBOS: Einstein believed it’s all governed by a certain fixed equation. Equations must tell you exactly what will happen next. And I believed that too until 1967. I really believed in a hard-core realistic view of how the universe works. Then something weird happened to me, so from 1967 until a year ago, I was really upset by the contradictions.

In 1967, I had nice mathematical theories about how the brain works and then this personal experience became confusing. And everybody told me Einstein’s stuff didn’t work anymore because of quantum mechanics. I read some of the quantum stuff and, just as Schrodinger and Einstein thought, it didn’t make sense.

For my PhD I wanted to figure out how to do what Einstein wanted to do: find a mathematical explanation for why quantum mechanics works as a statistical description of a universe that’s really governed by Einstein rules. That’s a hard mathematical problem. I couldn’t do it in three years, so for my PhD thesis I decided instead to explain how the human brain works. I already know that from work that I already did. When I showed it to the Harvard faculty, they said: Well, this is too complicated. Take a piece of it and we’ll give you a PhD for it. So I gave them 400 pages, which is now the source of what they call backpropagation and the new AI, which is Grade 1 of 12 grades. It’s bigger than these guys know.

SPENCER: Your experience clashed with something else in your belief system and you couldn’t make them jibe. But last year you got them to come together. That’s what I want to hear.

WERBOS: Yes. Einstein and modern quantum people had a big argument. There was a famous debate between Niels Bohr and Albert Einstein—not about God, but about how the universe works. There’s the Einstein point of view and there is the best modern quantum point of view. And before last year, I didn’t know which to believe. Einstein says we live in one universe but there’s a great living physicist called David Deutsch who invented quantum computing and his theory is that we live in a “multiverse.”

Schrodinger made up an imaginary thought experiment to show that Werner Heisenberg was stupid. He said: Heisenberg, if your theory is true, we could put a cat in a closet or a small room. We take a gun, hook it up to a Geiger counter, point it at the cat with a timer and set it so there’s exactly a 50% probability that the gun will fire and kill the cat. The timer stops after an hour. According to Heisenberg, the cat is not alive or dead, but in a “mixed state.” There are two copies of the cat. With this experiment, you turn the cat into two cats—one alive and one dead. Your looking at it forces it to be alive or dead. Schrodinger said: That’s what you predict, Mr. Heisenberg, and it’s crazy.

So, David Deutsch says: If you do that experiment, you split the cat in half and when you open the door, you split yourself in half. There are two copies of you. One sees a live cat and one sees a dead cat. The whole universe, the multiverse, has two copies of you—one of which seems to be in one place and the other in a place with a dead cat. Both places exist in the larger universe—the multiverse.

If Einstein is right, there’s only one universe, so how can there be two copies of you in it? That was bothering me until last year. I now think I understand the answer, but it’s very tricky. Present quantum computing is all based on Deutsch’s idea, which tells you how to build a new kind of computer that’s a million times more powerful. He said: The cat is not the only thing that can be put in a mixed state. You can put a computer chip in a mixed state. Then you have a million copies of that same computer chip in parallel universes in different states, each doing different work. At the National Science Foundation, I was part of the group that oversaw and funded that kind of research. But my real message is this: That’s all just Stage One. 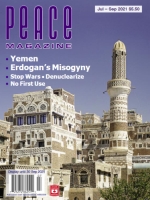