All the video talks on this list can be found on your computer, tablet, or smartphone on the Project Save the World website: https://tosavetheworld.ca/videos. Search for particular videos with their number and title, as shown in boldface here.

151 Climate Tipping Points (William Fletcher) Tipping points are moments when a linear rate of change breaks and a grave irreversible trend begins, such as a movement of the Gulf Stream.

152 Peaceworking in Armenia (Jill Carr-Harris) A cross-continent peace march was stopped by Covid, so Carr-Harris stayed in Armenia a while. Soon the area was at war. She urges a revival of the “Minsk Group.”

156 Art Hunter on Living Off the Grid (Art Hunter) Dr Hunter is an engineer who shows us how to live off the electric grid for 300 days.

157 Hispanic Immigrant Voting in the US (Maria Puerta Riera) A Venezuelan political scientist in Florida discuss the Venezuelan expatriates’ support of Trump.

158 Democracy and War (Marc Eliot Stein) Hours after the insurrection at the US Capitol, we consider the prospect of adopting a Green New Deal.

159 A World of Migrants (Subha Xavier) Professor Xavier studies the literature of migrants to francophone countries. She worked to “cure” the ballots that were rejected in Atlanta recently.

162 China’s Climate (William Fletcher) China’s pollution is caused by its heavy reliance on coal. Fletcher predicts that China will benefit from the sale of “green” technology to the world.

163 Russian Military in the Arctic (Ernie Reghr) Russian military presence is expanding greatly in the Arctic, but all the states there remain cooperative. We look at the new shipping routes.

166 Rotary and IPPNW (Richard Denton) Richard Denton,M.D. talks about the Rotarians’ campaign against polio and the IPPNW’s work with ICAN to create a treaty banning nuclear weapons.

168 Nuclear Waste and Indigenous Land (Lorraine Rekmans) Planning for disposal of nuclear wastes should be done by government, with participation of those whose land may be polluted.

169 Political Communication (Angel E. Alvarez) Discussion of privacy and the need of governments to access social media accounts of citizens.

170 Farming in India (Jill Carr-Harris, Doug Saunders) Discussion of Indian farmers’ protest movement and the reforms that are required.

173 How do People Become Torturers? (Bill Skidmore) The effects of brutality are lasting for both the torturer and the victim (or “survivor”).

174 Life in Rural China (Ellen Judd) In China there are rural/urban tensions, mainly about the increasing inequality.

175 The World in January 2021 (Franklyn Griffiths, Jo Hayward-Haines, Ellen Thomas, Hannah Hadikin) Activists in five countries discussed melting clathrates and permafrost in the Arctic; Monarch butterflies and the need to feed them with pollinator plants.

177 Japan and the Nuclear Umbrella (Gregory Kulacki) A tiny group of experts secretly determine Japanese nuclear policy. The Japanese fear China, want to keep the US from declaring no first use.

178 En-ROADS, A Climate Tool (Phillip Chipman, Mark Tabbert) Again we use the interactive model to show the most likely effects of various factors determining the temperature of the earth.

179 The Permian Basin Energy (William Fletcher) West Texas is a dry, windy area populated largely by jackrabbits and oil and gas men. These industries will be overtaken by renewable resources.

181 Marching Against Uranium (Neecha Dupuis, Ales Dupuis) They marched 28 days across Ontario with indigenous friends, informing people about the risks of radioactive contamination.

184 The Spanish Flu (Patrick Boyer). It was brought to Europe by Chinese workers and spread rapidly among the troops in trenches, who brought the virus back to Canada.

192 Internet Challenges (Rose Dyson, Charlene Doak- Gebauer) Parents should supervise their childrens’ access to TV and video games and prevent predators from preying on them through pornography sites.

193 Why Are There Still Nuclear Weapons? (Lawrence Wittner) A historian of the peace movement and Metta share memories of the eighties.

194 Drivers of Deforestation (William Fletcher) The serious deforestation going on today is in tropical rainforests, resulting in the lost habitat of species and increasing access to viruses from forest animals.

196 The Origins of WHO (David Webster) The Spanish Flu killed more people than World War I, leading people to see the need for an international body to coordinate global medical responses.

197 Middle Eastern Societies (Ayad Al Qazzaz) The term “Middle East” is ethnocentric, but too common now to challenge. Islam is certain to undergo great changes in response to Muslims in the West.

198 The Sticky Accelerator Problem (Craig Smith) It is hard to slow down global warming, for we must mainly wait for the effects of emission reduction to kick in. This is the “sticky accelerator” problem,

199 Climate Restoration (Zachary Jacobson) Reducing emissions is not enough; existing carbon must be removed from the atmosphere, so iron should be added to some areas of the oceans.

200 Security in the Caucasus (Arzu Abdulleyeva, Shorena Lortkipanidze, Ahmad Alili, Mikheil Mirziashvili) There is a desire to bring the Caucasus closer to Europe.

201 The World In February 2021 (Richard Denton, Alyn Ware, Rose Dyson, Glen Anderson) We discuss divesting from military expenditures and even withholding taxes for weapons and warfare.

202 COVID Work (Jon Cohen, Ronald St. John) There will be a surplus of it vaccine in the US and Canada soon, though no plans exist yet for donating the excess to COVAX.

203 Can Renewables Power the World? (William Fletcher) It is technologically feasible to power the world with renewable sources of energy in time but whether we do so it another matter.

204 Religion and Peace (Mary-Ellen Francoeur, Karen Hamilton, David Millar) The panelists say their work involves willingness to be open in the heart and to see others as “created in the image of God.”

206 Marshalls, Fukushima, Berkeley (Adam Horowitz) Adam Horowitz’s film showed evidence that the US had deliberately exposed the Marshallese to radiation and monitored their conditions for thirty years.

207 Forgiveness (Joy Kogawa) As a Christian, Joy believes that we should always be unconditionally forgiving, as Christ forgave those killing him. Metta argues that it is morally obligatory to require remorse. 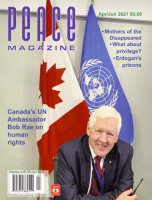