Women and men formed dance circles on the rhythms of drums. Singers, chanting to praise the prophet. Children were running around. I turned around to a toddler trying to climb on my chair. She looked straight into my eyes and smiled. I looked at her mother and she nodded. I carried the baby girl around, and soon she was with me for most of the time—when I was not dancing.

Everyone was staying late. For this Sufi order, chanting and drumming is an act of devotion to the Divine. Villages and small communities take pride in hosting “Mawlid” or celebrating the birth of the Prophet of Islam. Although “Mawlid” is an annual celebration, each one of the Sufi communities would dedicate a different day in order to give a chance for all villages to host a “Zikr” or “remembrance evening.”

In 2014, I was in Ghana where members of Tijani Muslim Sufi Order invited me to attend their “Mawlid.” It was an evening filled with serenity. I don’t belong to the order, but I was graciously welcomed. Many of the guests were not members of the community.

This summer, a 22-year-old singer, Yahaya Sharif-Aminu, was convicted and sentenced to death over an alleged “blasphemous song.” Sharif-Aminu, a Muslim belonging to the Tijani Sufi order, performed a song over the WhatsApp platform praising a spiritual leader. The song was deemed blasphemous by a Sharia court in Kano state in northern Nigeria. Before the sentence, a mob burned down the Sharif-Aminu family home. Reading and watching the news, I couldn’t help thinking about my beautiful memory of the “Mawlid” and the singers who were passionately chanting while drumming.

“We are deeply concerned over the serious lack of due process in Mr. Sharif-Aminu’s case so far, especially reports that he has been held incommunicado, and that he did not have access to a lawyer during his initial trial, a trial that was not open to the public,” according to UN Human Rights Office of the High Commissioner.
In order to help release Sharif-Aminu, it’s crucial to understand the roots of the crisis. While unrest is not a stranger to Nigeria, the North region is struck by extreme poverty compared to the rest of the country. More than 80 percent of all the poor in Nigeria reside in the northern part of the country.

THE POLITICS OF SHARIA

More than twenty years ago, the then-governor of Nigeria’s Zamfara state, Ahmed Sani Yerima, introduced Sharia law. Eleven other northern states with Muslim majority populations adopted the model. Back then, Nigerians were just out from a military dictatorship, hoping for a better system that protects freedom and respects human rights. The Arabic word Sharia translates as “Law.” However, it’s more commonly used to describe a judicial system based on Islamic teachings. Most of the time, this is left to interpretations that are derived from the politicizations of Islam. With Islam’s diverse schools of thoughts, sects. and interpretations, Sharia causes more division and chaos than unity. In Nigeria, Sharia courts have neither prevented corruption nor stopped Boko Haram from turning the lives of innocent people into a nightmare.

Baba Aye, trade unionist and editor of the Socialist Worker (Nigeria) says that the politicization of Islam over the past 20 years has taken different forms at different times. “[The government is] trying to use religion in order to divert the attention away from the corruption of the political elite in the North,” says Aye. “It’s more political than religious.”

Many of the those in leading political positions in northern Nigeria adhere to a secular lifestyle. Laws that are set by Sharia courts seem to apply only to the poor and those with less social and political affluence. “Sharia is not applied to the big elites,” says Aye.

The Hisbah Corps are religious police responsible for enforcing Sharia. That’s the name adopted by religious police corps in Saudi Arabia that was dissolved recently following international outcries. In most northern Nigerian states, Hisbah members are recruited by traditional leaders and local governments. According to Human Rights Watch, “the majority are young men with low formal education, no background in law, and no training in law enforcement or procedures for arrest, investigation, or gathering of evidence.”

In addition to monitoring actions, words, and songs that are viewed “blasphemous,” Hisbah are also busy monitoring the daily lifestyle of Nigerians. For instance, men and women are segregated when using public transit at Sharif-Aminu’s hometown. The death sentence that he has received expresses sectarian intentions in which Sharia courts target Sufi Muslims.

SUFIS: NOT THE ONLY TARGETS

Sufis are not the only targets. Backing political Islam with courts and militarism means holding the grip tight while diverting people’s attention from what matters the most: living standards and combating poverty and terrorism.

December 31, 2015 was the deadline the Nigerian state set for itself to defeat the Boko Haram insurgency. Instead of accomplishing its mission, the state killed hundreds of members of minority Shia Muslims and arrested their leader Sheikh Ibrahim Al-Zakzaky, whose destiny is unknown until now. According to reports by national and international organizations, at least 300 were killed and hundreds were injured. Human Rights Watch was unable to get an accurate death toll because soldiers buried the bodies in mass graves without families’ permission.

Since then, a number of peaceful protests have been organized demanding justice and the release of Al-Zakzaky, including the one in which Alex Ogbu died from head injuries. Aye recalls the death of journalist Alex Ogbu, a reporter and editor with the local independent outlet<\!s>Regent Africa Times. Sahara Reporters
published a report on January 23, 2020 saying that police had shot and killed Ogbu.

The government failed to improve the lives of Nigerians in the North while armed extremists such as Boko Haram have been terrifying people for more than a decade. The government has not defeated Boko Haram. I recall the first time I learnt about Boko Haram when they first appeared on media more than a decade ago to announce what they stand for. The terrorist group promotes a version of religion that makes it “haram” or forbidden for Muslims to take part in activities such as receiving secular education or voting in elections. The literal translation of Boko Haram is “Western education is forbidden.” Human Rights Watch has documented an estimated 9,500 civilian deaths since the beginning of the violent Boko Haram attacks in 2009.

It’s heartbreaking to witness Nigerians in the North between the jaws of Boko Haram and the state. Both have committed grave violations. In a press release issued by the Socialist Worker and Youth League demanding justice for Ogbu, this sentence solves the mystery: “The state killings of Nigerians demanding social justice is now about as much as killings by the Boko Haram which is considered as a band of terrorists by the same state.”

Sharif-Aminu is sentenced to death for a song. Innocent civilians have been killed while others live at the mercy of Sharia courts or the state. Poverty and corruption lead to warlords, insurgency, and extremism disrupting peace and terrorizing innocent people.

Yusur Al-Bahrani is a journalist based in Yellowknife, NWT. 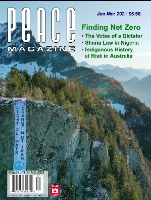