In 2011 Erica Chenoweth and Maria Stephan published a book, Why Civil Resistance Works,1 comparing the outcomes of 565 political struggles of the past 120 years. They found that about 51 percent of the nonviolent campaigns had succeeded, while only around 26 percent of the violent ones did so. Civil resistance worked better than violence by a 2-to-1 margin! Moreover, after the conflict ended, the societies (even those ruled by brutal dictators) that had waged civil resistance more often became stable democracies with high qualities of life than those where the struggle had been violent.

The explanation was simple. Success depends mostly on the size of the movement: the larger, the better. And because few people are eager to get killed or injured, a movement attracts more participants if it remains nonviolent. The police or army are less likely to shoot protesters if they are unarmed.

Erica Chenoweth, now a Harvard professor, will publish her new book, Civil Resistance,2 in February, but she has already revealed the main findings.3 Nowadays, she says, far more struggles are nonviolent and they are still more likely to succeed than violent ones—but the success rate has diminished for all revolutions. Since 2010, less than 34 percent of nonviolent revolutions and only eight percent of violent ones have succeeded.

Several other researchers offer the same explanation for the poor current results. Using Facebook or Twitter its easy to contact thousands quickly and bring them to meet in a public place, so movements have been relying too heavily on street demos rather than the more difficult (but usually more powerful) tactics such as general strikes and mass civil disobedience.

As Zeynep Tufekci has shown, social media are not good tools for establishing the sustained personal relationships that are required for planning institutions.4 The Arab Spring was an early instance of such failure, for the activists had not prepared to run the governments after winning.

There are other reasons for the failures of protest movements. Internet surveillance is easy nowadays so a repressive regime can often interfere with their plans. Moreover, Chenoweth has seen an increase in the amount of violence that movements have tolerated; she reports that more than half of the newer ones have allowed fringe groups (e.g. Black Bloc or Antifa) to participate. This enables the government to infiltrate the campaigns and instigate more violence to justify their violent responses. Fortunately, this may not be a consistent pattern, however, for this summer, 93 percent of the thousands of Black Lives Matter protests were nonviolent, according to The Washington Post.5

Activism can be lethal, especially in repressive countries, and 2019 was an especially deadly year for environmental activists, 212 of whom were murdered for resisting extractive industries or protecting endangered species. Most were not solved.

Indigenous people were 40 percent of those killed, though they constitute only five percent of the global population. Over half of the murders were in Colombia and the Philippines.6

On the other hand, the cyberworld also offers some benefits for movement organizers. They often pick up handy tips from watching videos of street demonstrations elsewhere. Among the current memes are the placing of open umbrellas around police cordons to get in their way. Also, when police teams are surveilling a demonstration, many protesters are nowadays shining green laser beams in their faces, so they give up in disgust and move away. Some protesters have begun bringing tennis racquets to the demonstrations and swatting back any tear gas canisters thrown at them. Another nifty trick is the use of orange traffic pegs; when a tear gas canister lands, one protester will immediately cover it with a traffic peg, while another one follows with a leaf-blower, whooshing away the noxious gas.

These innovations sound like fun, but the truth is, street demonstrations are no longer promising methods for bringing down dictators. The recent failures in Hong Kong and Belarus remind us of that truth. So what is the future?

Chenoweth maintains that the pandemic may have beneficial effects. Instead of prematurely marching with thousands of strangers in the street, activists are now holding Zoom webinars. That is exactly what we need to do to get to know each other well, strategize, and build credible new institutions for running society after we win.

5 Armed Conflict Location and Event Data Project, as reported by Tim Craig, The United States is in crisis: Report tracks thousands of summer protests, most nonviolent. The Washington Post, Sept. 3, 2020. 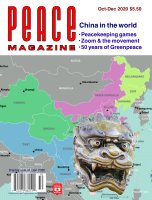