The Hanford Plaintiffs: Voices from the Fight for Atomic Justice

Trisha Pritikin’s new book, The Hanford Plaintiffs is more than a cautionary tale: it is a warning! The US President announced in May that the US is considering a restart of nuclear weapons tests. The US Nuclear Regulatory Commission (NRC) is using the distractions of the COVID-19 crisis to expedite the redistribution of many forms of nuclear waste, from low to highly radioactive, to every corner of the US. It appears that the US government is intent on making the US the final repository for nuclear waste from all over the world. Inhabitants of the planet cannot expect the US government, the nuclear weapons manufacturers, the corporations running the nuclear reactors and managing the nuclear waste, shippers, or recyclers, to take responsibility for ruining lives and even the planet.

Pritikin’s first-person account makes a strong case for the Hanford downwinders’ argument that the US Government used and abused them in order to produce plutonium for the bomb that was dropped on Nagasaki in 1945. Pritikin skillfully integrates the experience of downwind victims of atmospheric atomic tests at the Nevada Test Site (NTS) in the 1950s. It was not only Hanford workers, but family members and area farm families whose health—and thus their lives—were upended by the installation of the nuclear weapons production plant in eastern Washington State, a facility that secretly released radiation throughout the US Pacific Northwest and into southern British Columbia for more than four decades beginning in 1944. Hanford was the primary site for plutonium production during the wartime Manhattan Project and throughout the Cold War era.

The US government was careless in setting up the plutonium plant, having little to no regard for workers or their families or residents of the area, recklessly endangering animals, the Columbia River, and the surrounding area. All of this was done without properly compensating those whose property they seized and without regard for those whose family members worked at the plant, supporting the government’s efforts to build thousands of new nuclear weapons. Many of the workers did not understand that working at the Hanford site presented great risk to their own health and the health of their families. People in the area suffered for decades before hearing in 1986 of the possible link between an abnormal spate of radiogenic cancer and other serious disease in their downwind communities.

The US government indemnified contractors that ran the plant—General Electric, Atlantic Richfield, E.I. DuPont de Nemours, UNC Nuclear Industries, and Rockwell International—against legal liability for personal injury to communities downwind and downriver. While nuclear workers were able to file claims up to $150,000 for radiation damage to their health under federal law, workers’ families and other down-winders were forced to prove in court that thyroid cancers and other radiogenic diseases were caused by radiation released by the Hanford facility. Many of the original 5,000 plaintiffs received nothing in the 23-year-long litigation_ In re Hanford Nuclear Reservation._

The Hanford Environmental Dose Reconstruction (HEDR) Study, conducted in large part by a contractor for the DOE, was fraught with bias and methodological violations. HEDR has been shown to have likely underestimated the levels of radiation and resultant exposures to civilians downwind and downriver of Hanford. The Hanford Thyroid Disease Study, which purported to assess the true impact of Hanford on the downwinders, used the faulty reconstructed HEDR doses. It was set up to protect the defendants, former Hanford contractors and their indemnifiers, the US Government. In all those years of litigation, the plaintiffs struggled against the injustice of underestimated doses that did not allow them to prove their cases in court.

Freedom of Information Act (FOIA) requests and public pressure led the Department of Energy (DOE) in 1986 to declassify early Hanford operating records, revealing Hanford’s decades of radiation releases. While the US government lied, defended, and misrepresented the real story, FOIA requests and mounting public pressure made it possible for the facts finally to be revealed. Pro bono lawyers struggled to help downwinders gain compensation and documents located during discovery in the litigation revealed that the nuclear weapons facility had secretly released radiation offsite, hazardous to people and the environment. Thousands of pages of declassified documents showed that the Hanford plant was probably responsible for the deaths and diseases caused by radionuclides (nuclear materials) released by Hanford. These documents revealed that the Atomic Energy Commission and Hanford plant managers knew of the risks, and even so, did not tell anyone. Karen Dorn Steele, writing for Spokane’s Spokesman Review, broke the Hanford story and wrote many accounts of cancers and other diseases in downwind communities. Some of the downwinders only understood the link between Hanford and cancers, miscarriages, and chronic and acute illnesses from reading these newspapers accounts.

The US Government understands the lessons of Hanford, yet is currently ignoring them while enriching the nuclear industry and protecting supplies of radioactive material for future nuclear weapons. * * The DOE is blatantly moving ahead, perhaps assisted by the public’s distracted attention to the pandemic, to facilitate the opening up of “parking lot dumps” for deadly radioactive waste. The federal government wants to secure storage sites because new nuclear weapons production will generate waste. The public is yet to discover that, because of hastily permitted and developed storage sites, shipment of hazardous nuclear waste is already on our highways via trucks, and may even be in waterways via barges, and carried via air.

Corporations don’t really care if their scheme works or if it causes damage. The revenue pipeline from Canadian and US governments will fund them anyway and they will be indemnified against liability. Start-up of nuclear weapons production and testing will once again grievously injure downwind communities, and, as with NTS atmospheric tests, airborne radiation will be carried long distances to the US Midwest, the US East Coast during rainouts, into Canada, and elsewhere, depositing radioactivity on soil and pastures. Radioactive iodine from production and testing will once again deposit on pastures where it will be grazed by cows and goats, later entering milk consumed by children whose thyroids will uptake the radioactive iodine, and who, years later, may develop thyroid cancer, causing financial ruin for families with no health insurance.

Municipal governments already recognize the peril they face. Hundreds of municipalities around the Great Lakes and elsewhere oppose the shipment of radioactive materials through their neighborhoods, nuclear waste storage near their rivers and lakes, cross-country shipments, and new plutonium production. Diluting the level of radioactivity in metals allows for recycling radioactivity into household objects, like the zipper in your pants or your knife and fork, with virtually no oversight. Groups such as Don’t Waste Michigan, Don’t Waste the Great Lakes, Beyond Nuclear, and the Canadian Coalition for Nuclear Responsibility are building support to stop these actions.

Environmental groups are challenging this assault. The Oak Ridge Environmental Peace Alliance won a federal lawsuit last fall against the Uranium Processing Facility (a nuclear weapons manufacturing plant). The judge ordered a new environmental study, faulting the government for failing to consider earthquake risks. The National Nuclear Security Administration responded that they would continue construction of the facility as though the court case had not happened—and this spring produced a quick, inadequate report that attempts to dismiss environmental consequences outright.

Hanford plaintiffs: we are listening. Can we imagine that the US government will join us? 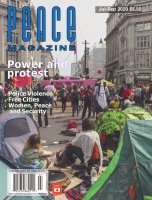 Search for other articles by Ann Frisch here