Are We Done Fighting? Building Understanding in a World of Hate and Division

Matthew Legge is the Peace Program Coordinator of the Canad­ian Friends Service Committee. As a Quaker, he has a compelling knowledge of the Friends’ history of pacifism. The cultural and political shifts of climate change, automation and economic injustice are exacerbating unrest and underscoring the need for peacebuilding initiatives.

Each chapter concludes with a summary of “tips,” followed by suggestions for group activity. The emphasis throughout the book is on facilitation of “active” participatory learning. Topics range from the definition of peace — what it is not and how it relates to power in a myriad of ways: power over, power with, and power within. Peacebuilding that has meaningful change requires communication skills.

We get an in-depth exploration of violence, its roots, its impact, as well as the natural, human predilection to violence and ways of mitigating it. In the prevailing cultural environment violent conflicts are encouraged by “power over” entertainment for children, who are particularly vulnerable. Such a narrative, as seen in comics and violent video games, promotes simplistic notions about good and evil.

Legge frequently returns to this theme. Adults, as well as children, by indulging in violent media entertainment, become desensitized to violence and more inclined toward aggression.

The connection between violence and social change is addressed. Nonviolent protests, usually triggered by anger and a sense of injustice, can evoke public sympathy and even affect voting patterns. When safety concerns arise, there is often a call for “law and order.”

Strategies are considered for addressing hatred. Hate speech, Legge points out, is never harmless. The internet allows it to spread, raising again the perennial problem of censorship. The book discusses hate crimes, terrorism, and white supremacy, along with potential approaches to prevention. Legge cites research showing that fear and rage restrict our ability to experience the positive emotions that broaden our perspective and let us think more imaginatively. The ancient notion of catharsis is considered, and the recent research that disputes its usefulness for dealing with anger and rage.

Who benefits from the status quo in which a lucrative arms trade is considered essential to community safety? “Groupthink” can lead people to defend systems that are against their own best interests. Legge discusses other problematic situations, such as the occasional difficulty of distinguishing between oppressors and victims, and the need to strike a balance between safety and agency. These tendencies are examined as they arise on university campuses and classrooms, frequently leading to censorship of “dangerous ideas.”

The pursuit of inner peace is explored as it relates to connectedness — which digital technology can both facilitate and mitigate. Inner peace is also considered in relation to the environment — notably the value of green spaces as sources of relaxation. Legge even considers the possibility of a contagious “peace virus” spread through positive imagery. Conversely, he notes that violence in conflict resolution is associated with playing violent video games. The “peace virus” or its opposite has a rippling effect throughout a community, beyond the individuals immediately involved.

Legge stresses the urgency of abolishing war, citing examples of successful outcomes to either abolishing or preventing war through United Nations initiatives and other peacebuilding efforts. He reflects on the controversial “Responsibility to Protect” policy, and also the use of sanctions. He favors establishing ministries of peace as agencies of governance to improve the possibilities of prevention.

The book is well-organized and wide-ranging. It deserves to be widely read by students, educators, and policy makers.

Reviewed by Rose A. Dyson, author of Mind Abuse: Media Violence in an Information Age 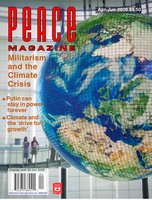 Search for other articles by Rose Dyson (reviewer) here