Humankind’s reluctance to phase out our dependence on fossil fuels is a global problem with no quick solutions. A major factor is perhaps the massive size of the auto, airline and merchant shipping industries. Railways around the world — another major consumer of petroleum products — continue to operate diesel locomotives, although more and more are switching to electricity, derived from either fossil-fuelled generators, nuclear, or hydro power. There are also a few remaining coal-fired steam engines in operation for the benefit of nostalgia buffs around the globe. Aside from transportation, the business of manufacturing consumes another large slice of the petroleum products produced world-wide.

When nations decide to transition to renewable sources of energy, Rifkin warns that the cost of decommissioning the fossil-fuel infrastructure—which he calls “stranded assets” — will be significant and should therefore be taken into account. The longer these decisions are deferred the greater the costs of transition.

Why governments and industry have largely failed to take advantage of the new technologies that have already proven to be both clean and far less costly, defies logic. The Intergovernmental Panel on Climate Change (IPCC) issued a dire warning in October 2018, that we are on the verge of escalating climate events, imperiling life on the planet. In the years since, record temperatures, wildfires and melting polar ice have proven the UN body’s predictions to be valid. However climate deniers have not given up their assertion that what they term “scare tactics” are merely a hoax dream ed up by China.

Readers of Rifkin’s latest book may be surprised to learn that both China and the European Union have already well into the process of phasing out coal-mines, cutting back subsidies for the petrochemical industry and harnessing solar and wind-power instead. Meanwhile, both the US and Canada are lagging behind. However, elected officials are sensing a sea change in public opinion that is moving the issue of climate change from near obscurity to a central issue, triggered by frequent and violent changes in weather, that have caused widespread property damage, business disruption and loss of life. This explains the author’s cautious optimism and hope that more people get involved in challenging our leaders to take prudent action before the problems become irreversible..

Jaremy Rifkin takes a non-partisan approach to the issues, thereby clearing the decks of squabbling politicians pre-occupied with finger-pointing rather than addressing the crisis and taking action. The author has in fact been consulted by both government officials and industry leaders in several countries, impressed by and convinced of his observations and analyses outlined in his earlier work, the Third Industrial Revolution.

New technologies have proven to be less costly and cleaner by far. So why are most governments so slow in transitioning? Part of the answer may be that bureaucrats keep delaying decisions in their quest for perfect solutions. Interestingly, Rifkin points out that Canada’s decision to invest in LNG (liquified natural gas) was not a wise one. Although gas is a cleaner fuel and is still in high demand — particularly in Asian markets — natural gas is a petroleum product, the extraction of which generates a high percentage of all the greenhouse gases emitted world-wide.

The prospect of limiting the rise in global temperatures to 1.5°C will be a serious challenge. However, the consequences of shelving this problem would be far worse. For example, in 2017, Germany commissioned the International Renewable Energy Agency (IRENA) to do a report comparing projected costs of production and consumption of fossil-fuelled energy with that of energy powered by renewables. IRENA ran a two-timeline scenario: in the first “accelerated” model where the transition from traditional to renewables commencing from 2015 until 2050 was estimated to cost $3 trillion for the stranded fossil fuel assets. In the “delayed policy action”, where the transition was deferred to 2030, the projected costs to 2050 totalled $7 trillion.

As for the nuclear option (which, by the way, is currently under consideration for both Ontario and Saskatchewan), governments need to be reminded of a fundamental problem with nuclear power, seldom brought out by its proponents. The spent fuel-rods used in reactors retain lethal levels of radioactivity for a quarter of a million years, so burying them deep underground is not good enough. Moreover, is this the legacy we must inflict on our children and future generations?

Some readers may accuse Rifkin of blowing his own trumpet when referring to his meetings with world leaders in government and business; nonetheless his facts are well researched and backed by solid scientific evidence. For that reason alone he should be commended. 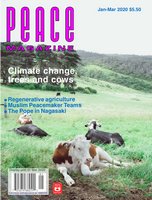