One hundred fifty years ago Mohandas K. Gandhi was born. Now, as memorial ceremonies are held all over the world, we must ask: What did the world learn from that man? And how well have we learned his wisdom? The answer to neither question is certain.

From Elisabeth Khan’s article about Jill Carr-Harris’s forthcoming march across Asia and Europe, we learn that Gandhi’s influence is still deep among the rural people of India. Village women taught her about self-reliance. She found that they were leading their own development without money.

But is that kind of self-reliant development still prevailing in the country? The conversation with Ashis Nandy leaves us less hopeful. Nandy even declares that he does not favor development, for it has come to mean something very different from the autonomous community life that Jill Carr-Harris and her husband P.V. Rajagopal support, in the Gandhian tradition. Nandy criticizes Modi, the current leader of India, and the prevailing notions of development, which have destroyed communities and imposed heavy burdens on the people.

Gandhi’s values are still alive in the world today but apparently losing support. To be sure, we have such projects as the U.N.‘s Sustainable Development Goals, which are totally compatible with his “constructive program.” But Gandhi emphasized social inclusiveness, and that value is diminished in many countries, including his own. Nationalism, the Alt-Right, and white supremacy win most elections. Walls are built at borders to exclude the neighbors. Constitutional guarantees are abrogated. Tensions are increasing between the principles of local autonomy and global governance, and the results are painful.

Progress is the result of conflicts well-waged. Thanks to Gandhi, we know how to fight more respectfully. Thanks and good wishes to the Gandhian marchers. When they reach Geneva next year, we will be eager to hear what they’ve learned from the conflicts they meet along the way. 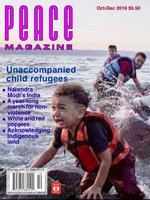