The Moral Imagination: The Art and Soul of Building Peace

Academic writing is a process of linear thinking. Three main elements are usually needed to complete the writing: empirical evidence, theoretical framework, and case studies. These three intersecting lines of thought produces a triangle which Johannes Itten phrases as “a symbol of thought.” It seems that this pattern is applied to the great works of scholars who focus on the science of peacebuilding as well. However, their embodied purposeful thoughts are shared within the privileged sphere of academia. Thus, the books mastered by these scholars meet their readers within this sphere.

Lederach attempts to break this tradition to broaden the circle of readers. Remarkably, he adds another pillar to the intersecting lines of the linear thinking that he terms as “the moral imagination”. By doing that, he creates the fourth dimension to transform this triangle to a square -Itten’s notion of “a symbol of matter.”

In this unique scholarly book, Lederach utilizes distinct values of creative art in expository research to contribute new lenses to traditional peacebuilding studies. By compiling his personal experiences with the testimonials from diverse political geographies, he proposes that moods, feelings and ideas should be synchronized with the “front and back sides of peace engineering” to construct the art and soul of the creative peace process. He argues convincingly that “be it artistic, political, economic, or social, the wellspring lies in our moral imagination.”

Thus, the moral imagination is the major dynamic component of this book which starts with four guiding stories. Lederach is aware of several questions that come from academia. However, his endeavor to utilize creativity through sources like haiku poetry and doodling together with his artist father reflects his search for different ways, particularly, in a creative sense to solve the problems of conflicts and build up peace. Accordingly, the chapters are structured with the elements of creativity and searching engagement of our senses and souls. Topics like “Simplicity and Com­plexity,” “On Mass and Movement,” “On Web Watching,” and “On Seren­dipity” are just a few that fulfill the stated purpose of the book.

The first chapter starts with talks about 9/11, on a courtyard veranda of the Tajik painter Akmal in Dushanbe, a tranquil place far from where the tragedy happened. Lederach argues that “we must set our feet deeply into the geographies and realities of what destructive relationships produce, what legacies they leave, and what breaking their violent patterns will require.”

This chapter contains valuable questions, statements and creative ideas about the building of peace, however, a reader may ask whether power plays a role in interpreting the complexity of dualistic polarity. Who are the actors in the “landscape of protracted violence? What are the factors hindering peace? I think that Lederach gives too little focus on these points.

The chapter “On This Moment” reflects Lederach’s positive thinking about the future of humanity. He describes the past decades as filled with raised and failed expectations, a journey of extraordinary changes. However, he is optimistic that the “twentieth century created within us a keener understanding that humanity has the potential for constructive change within our political, economic, and technological reach.”

It is all about a “turning point.” Lederach connects “the turning point of human history” with the moral imagination to argue that “this … lies with the capacity of the human community to generate and sustain the one thing uniquely gifted to our species, but which we have only on rare occasions understood or mobilized: our moral imagination.”

The chapter “On Web Watching” exhibits the fascinating journeys of the “web watchers” of the micro-universe of spiders. The watchers’ delicate methods for observing how spiders weave the webs, their stillness, humility and perception are described as “soul-based disciplines.”

With this book, Lederach clearly opens a new perspective to traditional framework of peacebuilding studies. The Moral Imagination The Art and Soul of Building Peace deserves to be essential reading for everyone interested in the science of peacebuilding.

Reviewed by Evnur Taran, an editor of Peace. 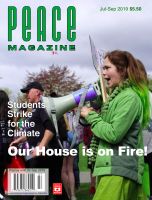 Search for other articles by Evnur Taran here