Montreal activist and videographer abraham Weizfeld takes a fresh look at the demographics of Israel/Palestine. His proposal, which might sound audacious, is of a federation which would accurately reflect the class and social strata of a complex society where nearly half the Jewish population is of North African descent.

I sat before two agents of the Ministry of the Interior at the Ben-Gurion airport, who were playing Golda Meir by questioning my entry into the Zionist State of Israel. It didn’t matter to the women that my Jewish Agency visa, signed by the Consul of the State of Israel in Montréal, was set for three years.

I was not supposed to go into the Palestinian territories, though some 600,000 Zionist Israeli citizens are already living in the West Bank, with plentiful financial subsidies as well. They presumed that it was illegal to travel into the Palestinian territories, past the Green Line, because that was not the State of Israel—though Israel assumes that it is. True enough, the Green Line is not an international border since Israel does not recognize the independent State of Palestine. Nonetheless, it was made into an impenetrable barrier by a law that does not exist. But the constant flow of Christians to Bethlehem in the Palestinian Territories does not seem to violate this virtual law.

For Israeli citizens, there does seem to be a legal barrier. It is announced on big red signs at the entrance to the Palestinian cities and villages of the West Bank. It used to proclaim that it was illegal for Israeli citizens to enter the Palestinian municipalities and anyone doing so is subject to a penalty of two years imprisonment! The sign was changed years ago, since it gave the impression that an apartheid policy is in effect. It now says that the forbidden entry policy is for the safety of the Israelis. The Palestinian-Israelis who went to Nablus to buy goods at advantageous prices were not considered to be violating the edict. Hebrew-Israelis, however, were and are not supposed to make contact with the Palestinian non-citizens living in the ‘Territories’. This ignores the presence of the original Israelites called Samaritans or Karites, who still live as Palestinians on Mount Gerizim in Nablus with identity papers from the Palestinian Authority, the Israel State, and Jordan.1

The routes to Israel’s colonies placed next to the Palestinian municipalities on private lands are serviced by particular roads and buses exclusively for the colonists. The idea is that seeing no Palestinians is equivalent to knowing no Palestinians, which amounts to rejecting the existence of the Palestinians. This is difficult since, even within Israel proper (‘48 Palestine), there are many Pal­estinians. They actually live in equal numbers to Jewish residents in Jerusalem-Al Quds, Haifa, and Acca and constitute the majority in the northern regions where Christian Palestinians are more numerous.

During the initial sweep of Zionist militias, who forced the Palestinian villagers to flee the mini-massacres in each village during the 1947 – 49 Nakba (“war of independence”), the Christian Palestinians were a sensitive subject for Prime Minister David Ben-Gurion. Israel relied on the Christian Occidental powers as sponsors of the Zionist state in the UN General Assembly. Also, some Jewish residents protected Palestinians by deliberately joining them in front of the rifles of the Zionist militias and impeding the wholesale expulsion.

Nonetheless, 750 – 825,000 Pales­tinian refugees were forced to flee. One friend’s grandfather told us in a video posted on my YouTube channel that the radio messages calling on the Palestinians to flee were from the BBC’s (British Broadcasting Corpor­ation) Arabic language radio transmission, not from the Arab states’ radio news.2 At the time under British occupation, Palestinians were not allowed to own radios, and the BBC Arabic service was amplified by loudspeakers in the town centres as the only radio news legally available.

Interestingly, this remaining Palestinian population has 13 seats in the current Knesset (Parlia­ment) of Israel. Considering that only 50% of the Israeli-Palestinian population voted in the previous election, it is conceivable that with a greater voter turnout, the Palestinian parties could hold the balance of power after the upcoming election in April 2019.

Back in the interrogation room at the Ben-Gurion Airport, a list of my sins was being written down in five pages of notes gleaned from my YouTube videos.3 One video, made at the Jerusalem crossing point demonstration last year, showed my comment to an officer after he refused to answer me in Yiddish and made disparaging remarks to me. My response to him was that evidently I was Jewish but that he was a Zionist and that this was a big difference. The Palestinian journalist next to me recorded this episode and broadcast it on the major Internet Palestinian news service Al Quds News Network, which was viewed by 37,000 people. This theme is appreciated by the Palestinians.

The next topic of discussion in the interrogation room was the matter of making videos of the soldiers who could be doing “bad things.” While there is a draft law prepared to make such videos of soldiers illegal, it has failed to pass in the Knesset. This is because the government has collapsed over a proposed bill to enforce conscription of the Orthodox Jewish residents of Jerusalem, who refuse to register for military service. While the media’s image of Jewish Orthodox “settlers” has created a stereotype of fanatic Zionists, the majority of Ortho­dox actually reject the authority of the State and have a civil disobedience campaign to resist induction, even going to jail to do so. Netan­yahu’s government coalition thus lost its major partner, the Shas religious party, and was forced to call an election even before the Attorney Gen­eral Avichai Mendelblit could submit three accusations of corruption against that Prime Minister.

Meanwhile, at the Gaza frontier, about 300 Palestinians have been murdered, 6000 maimed—shot with live fire—while about 29,000 have been injured while demonstrating for the Right of Return. About 80 percent of the resident population are refu­gees from ’48 Palestine. Some Israelis who came to demonstrate on the other side of the fence have even stood in front of the soldiers’ M-16s to prevent further shootings.

The actual story is this; The Pales­tinians are in a decades-long revolution against a military power that claims to be protecting the Jewish people and the Israelis in particular. This pretext is false. I can sense this from the response to my new book. Its title, The Federation of Palestinian and Hebrew Nations, elicits a favorable response from all the Palestinians that I have spoken to here in Nablus, Pales­tine.4 Meanwhile, the Left in the West is engaged in a futile debate over whether to favor the “Two-State Sol­ution” or the “One-State Solution.”

Here in Palestine that is not the question. Such a binary antinomy ignores the Right of Return of the seven million Palestinian refugees. The actual problem is that Hebrew Israelis will not accept the idea of becoming a minority again, since that is equivalent to being a persecuted nationality, either in the mild form of an Islamic millet or as a targeted people by the Western Christian nation states. However, a constitutional provision for National-Cultural Autonomy in a federation could nullify that fear.

Moreover, there is a different context to take into consideration. The two sides are often depicted in theocratic terms, though most of the Jew­ish people are no longer religious. And the sociological demographic is gen­erally ignored. Whereas the Pal­estin­ian and Hebrew populations are about equal inside the territory of the State of Israel, two other factors are relevant.

Half the Hebrews are Arabs

First, in addition to the internal refugees displaced from their homes and lands, a majority of the Pal­estinian people live outside of Pales­tine as refugees under duress and are not permitted to return. In addition, half the Hebrew population of Israel are actually Arabs from North Africa: the Maghreb countries of Morocco, Tunisia, Algeria and Egypt, as well as Iraq and Yemen. To count the Arabs of the present State of Israel one must include the Jewish Arabs. The existing balance of demographics is actually about 10 million Arabs and three million Jewish Hebrews of Ashken’azi and Russian descent.

This non-theocratic context reveals the class and social strata character of the state of Israel. It is European in origin and dominated by an exclusive elite of Ashken’azi Zionist members.The Jewish Arabs have more in common with their Palestinian neighbors than with the elite imposed from European origins. The common interests of the Arab nationalities creates a potential to overcome the historic discrimination enforced against the Palestinian nation. Rather than force, war, and violence, it is the transformation of consciousness that can end the hierarchical domination, which relies upon militarism and fear to maintain control.

Together with the return of the seven million Palestinian refugees, the 17 million Arabs of the country can find a common interest to live again in peace with the three million European Ashken’azim. The national identity of the Ashken’azim can be protected by equality with the Jewish Arabs by a policy of national-cultural autonomy. This autonomy is maintained by the sharing of a language, religious history, educational system, government, judiciary and national security police. The point, however, is that each major nation lives in a reciprocal relation of autonomy, with neither being able to dictate from a position of centralised state control.

The current state formation is a European model that is unsuitable for the multinational social formations of the Orient. Indeed, its failure, even in Europe, is evident in the blundering attempts at confederation in the European Union.

This Palestinian struggle for coexistence in a multinational society has persisted over the decades, inspiring other struggles such as the Arab Spring. Further­more, it is an example of endurance for social struggles throughout the world. A social struggle is not inherently violent but is a response to repression that uses force to maintain control. A social struggle in the face of occupation, militarism and imposed poverty is forward-looking. Someday, the international agencies—the UN General Assembly, Security Council, the World Court in the Hague, the International Crim­inal Court and the Non-Aligned Nations—may protect the struggle of indigenous people for peaceful social recognition.

abraham Weizfeld is based in Montréal and works internationally to support the rights of Palestinians. 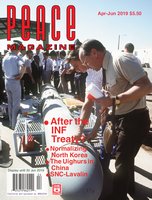 Search for other articles by Abraham Weizfeld here