The Nobel Peace Prize and Women Victims of War

The common theme linking the 2018 Nobel laureates is their dedication to the protection of women civilians, both in open warfare and in so-called low intensity conflicts. Here, René Wadlow of the Association of World Citizens profiles Nadia Murad and Denis Mukwege.

Nadia Murad, now a UN Goodwill Ambassador on Trafficking of Persons, is one of the two laureates for the 2018 Nobel Peace Prize.

In 2014, when she was 21, she and her neighbors in a predominantly Yazidi village in the Simjar mountainous area of Iraq were attacked by the forces of the Islamic State of Iraq and Syria (ISIS). These forces were following a pattern of targeted killings, forced conversions to Islam, abductions, trafficking of women, sexual abuse, and slavery. In Murad’s village, most of the older men were killed, the younger men taken to be soldiers in the ISIS forces, and the women taken into slavery, primarily as sex slaves, in Mosul, the city which served as the headquarters of ISIS.

There were some 500,000 Yazidi in Iraq, though Iraqi demographic statistics are not fully reliable. Yazidi leaders may give larger estimates by counting Kurds who had been Yazidis but had converted to Islam. There had been some 200,000 Yazidis among the Kurds in Turkey but now nearly all have migrated to Western Europe, Australia and Canada. Many of the Yazidi are ethnic Kurds and the government of Saddam Hussein was opposed to them, not so much for their religious beliefs but because some Yazidi played important roles in the Kurdish community seen as largely opposed to his government.

After a time in Mosul, Murad, with the help of a compassionate Muslim family, was able to escape Mosul and make her way to the Iraqi Kurdistan area where many Yazidis from the Sinjar area had already arrived. Once there, she joined a newly created association of Yazidi women who had organized to defend their rights and so that the voices of women could be heard. A few of these women were able to be resettled in Western Europe. Nadia Murad was able to live in Germany, where she became the spokesperson for Yazidi women and other women who had met a similar fate. In December 2015, she addressed the UN Security Council and became the public face both for the Yazidi women and for an even larger number of women victims of the fighting in Iraq and Syria.

The structure of the Yazidi world view is Zoroastrian, a faith born in Persia proclaiming that two great cosmic forces, that of light and good, and that of darkness and evil, are in constant battle. Man is called upon to help light overcome darkness. However, the strict dual thinking of Zoroastrianism was modified by another Persian prophet, Mani of Ctesiplon in the third century CE. Mani tried to create a synthesis of religious teachings that were increasingly coming into contact through trade: Buddhism and Hinduism from India, Jewish and Christian thought, Gnostic philosophy from Egypt and Greece, as well as many smaller traditional and “animist” beliefs. He kept the Zoroastrian dualism as the most easily understood intellectual framework, though giving it a more Taoist (yin/yang) character. Mani had traveled in China. He developed the idea of the progression of the soul by individual effort through reincarnation, a main feature of Indian thought.

Within the Mani-Zoroastrian framework, the Yazidi added the presence of angels who are to help humans in their constant battle for light and good. The main angel is Melek Tavis, the peacock angel. Although there are angels in Islam, angels that one does not know could well be demons, so the Yazidi are regularly accused of being “demon worshipers”1

While it is dangerous to fall into a good/evil analysis of world politics, there is little to see of “good” in the ISIS actions. Thus, Nadia Murad can be seen as a bringer of light into a dark time.

1 A Yazidi website has been set up by Iraqis living in Lincoln, Nebraska, USA. The website is uneven but of interest as self-presentation: www.yeziditruth.org (“Yazidi” is sometimes written “Yezidi”)

Denis Mukwege has become an eloquent spokesperson for the effort to outlaw the use of rape as a weapon of war. Rape has often been considered as a “nearly normal” part of war. When an army took a city or town, the rape of women followed, a reward to brave soldiers. Military commanders turned a blind eye.

However, whatever may have been past practice, rape has now become a weapon of war, often an effort at genocide. Women’s reproductive organs are deliberately destroyed with the aim of preventing the reproduction of a group—one of the elements of genocide set out in the 1948 Genocide Convention.

Known rape, even by one perpetrator, can be a cause of family breakup, lasting shame, and an inability to continue living in the same village. There are also negative attitudes toward children born of a rape.

In 1999, Denis Mukwege established a clinic near Bukavu in South Kivu, Democratic Republic of Congo—a country that is democratic only in name. He, and a number of younger doctors whom he was trained, care for women who have undergone rape by multiple men. The clinic has repaired damaged reproductive organs in tens of thousands of women over the past decade.

The eastern area of Congo is the scene of fighting at least since 1998—in part as a result of the genocide in neighboring Rwanda in 1994. In mid-1994, more than one million Rwandan Hutu refugees poured into the two Kivu states, fleeing the advance of the Tutsi-led Rwandan Patriotic Front. The refugees included Hutu militia, who continued to carry arms and to kill Tutsi living in the Congo—even those whose families had first migrated there in the 18th century.

The influx of a large number of Hutu led to a desire to control the wealth of an area rich in gold, tropical timber, and rare minerals such as coltan (used in mobile telephones). In the Kivu, many problems arise from land tenure issues. With a large number of new people, others displaced and villages destroyed, land tenure and land use patterns need to be reviewed and modified.

However, violence in the eastern Congo is not limited to fighting between Hutus and Tutsis.

There are armed bands from neighbouring countries—Rwanda, Burundi, Uganda—who have come on the scene, attracted by potential wealth from timber and mining. In addition, local commanders of the Congolese Army, far from the control of the Central Government, have created their own armed groups, looting, raping, and burning village homes.

There is a United Nations peacekeeping force in the Congo, the UN’s largest peacekeeping mission. However, its capacity has reached its limit. Its operations are focused on areas with roads, leaving villages on small paths largely unguarded.

There has been a growing international awareness of the use of rape as a weapon of war. The issue was raised during the conflicts which followed the breakup of Yugoslavia as well as cases brought to the International Criminal Court. The Association of World Citizens has raised the issue in UN human rights bodies in Geneva.

Yet there is still much to be done to make the criminalization of rape a norm of humanitarian law. The Nobel Peace Prize to Denis Mukwege should be a strong step forward in this effort. 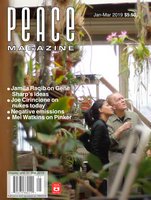