Although fishing is my new favorite hobby since moving to the Northwest Territories, I have to be careful in deciding where to fish or swim. Arsenic contamination persists in Yellowknife— an issue that has always been the talk of town. Therefore, eating fish from highly contaminated lakes is not safe.

Giant Mine is one of the largest and richest mines in Canadian history. The city was built, flourished, and expanded. Jobs were created. From 1948 to 2004, 200 tonnes of gold were mined from the site just outside Yellowknife in the NWT. This is worth $2.7 billion.

Decades after its closure, the mine’s legacy is arsenic contamination, an issue that has affected the health of Yellowknife’s residents and is currently costing taxpayers millions. The gold extraction process used at Giant Mine created a highly toxic by-product, a dust called arsenic trioxide.

Environmental advocates confirm that there’s 237,000 tonnes of arsenic trioxide stored underground. The pollution buried under the mine’s site is close to downtown and is posing a great threat to not only NWT residents, but Canada’s entire marine system. If contamination ends up in the Great Slave Lake, it might flow to Canada’s largest river: Mackenzie River.

The mining company doesn’t exist anymore. Who is paying to keep everyone safe? Government—or in other words, taxpayers. The temporary solution is freezing the arsenic, but eventually there needs to be a long-term solution that would prevent arsenic from leaking to all water bodies.

In the meantime, people in Yellowknife and the surrounding communities need to be aware and check arsenic updates regularly. It is safe to drink tap water in Yellowknife, but for instance, harvesting berries close to highly contaminated sites poses a health risk. A map provided by the Health Department indicates the level of arsenic concentration in lakes around the city by using coloured dots. It’s unsafe to fish or swim in lakes marked with red dots on the map.

We had a shortage of letters this time, so we wrote to friends in Russia, saying: “I’d like to print a collection of small messages called ‘Good News From Russia.’ The folks in Canada hear lots of bad news from Russia but we haven’t heard anything very good lately.” So here are a couple of letters that we received in reply:

Congratulations to Debbie Grisdale, recipient of the Canadians for a Nuclear Weapons Convention 2018 Achievement Award. 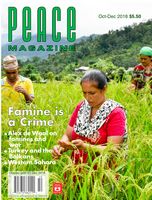