The Costs of Pipeline Expansion

The government of Prime Minister Trudeau has announced that it intends to buy the ailing Trans Moun­tain pipeline. Unfor­tun­ately, this decision carries significant costs.

These costs go far beyond the C$4.5 billion that the government proposes to invest in the pipeline expansion.

The first cost is to human well-being. The oil Trans Moun­tain carries contributes to the warming of our planet. Although this oil is intended for international sale, climate change is borderless.

Committing to more fossil fuel use means committing to a greater risk of respiratory diseases, like asth­­ma, and a greater likelihood of extreme weather, both of which are linked to climate change. In turn, this is predicted to affect health outcomes, agriculture, and fisheries, according to the government’s own research. In the aggregate, these and other climate-related impacts could far outweigh the short-term economic benefits of expansion to oil sands workers who are caught in the boom and bust cycles of development.

Our hearts go out to the families that may experience harm tomorrow from the dangerous expansion of fossil fuel use today.

An additional cost is to the public’s trust. Canada has made bold public commitments to protect its people by protecting the climate. Chief among these are the national commitment to reducing greenhouse gas emissions by 30% by 2030 and the signing of the Paris climate agreement, which puts the world on a path to limiting global warming to 2?.

It is not clear how achieving these goals is compatible with buying a pipeline that will carry an additional 690,000 barrels of fossil fuels per day to market.

The greatest cost however, is moral. As people of faith, we believe that addressing climate change is a way to demonstrate neighborly love. It will protect young people. It will protect the poorest of our sisters and brothers.

The G7 nations emit about one-fourth of the world’s greenhouse gas emissions, according to the World Resources Institute. They pledge to decarbonize the global economy by the end of the century.

Reaching this goal is possible, if we work together.

Whether we meet these courageous public commitments matters. For the Prairie provinces, the short-term economic benefits of tar sands expansion are very tempting. How­ever, important questions about the public good remain unanswered, particularly questions that weigh short-term gains against long-term risks to our health and safety. It is also crucially important to respect the rights and dignity of our Indigenous neighbors.

Meeting our commitments to decarbonize also has repercussions around the world. For people in the South Pacific, like Papua New Guinea, the consequences of climate change include the loss of one’s homeland. As a warm­­ing planet leads to rising seas, entire Pacific nations are being submerged, metre by metre. Families and whole communities have been uprooted, leading to a loss of the lifeways that have sustained its people.

Committing to a clean energy economy is the best way to protect people around the world and create secure, clean jobs that serve all Canadians.

As such, we pray that the government will support integral human development. Simply put, the Trans Mountain pipeline has costs that go far beyond its extravagant price in dollars. We pray that Canada’s leaders will count these costs, and recognize that they are much too high. 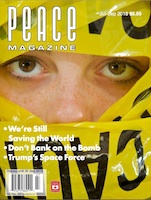