A Mission of Reconciliation

I am in Vietnam this week with a delegation from Veterans For Peace. We will be visiting My Lai on Thursday, March 16, the 50th anniversary of that horrific massacre. We’re expecting an intensely emotional experience as we remember the more than 500 civilians who were killed that day, including many women and children. It will be an occasion of rededication to working for peace and seeking reconciliation with the Vietnamese people.

That mission of reconciliation remains incomplete. For decades the U.S. government has refused to acknowledge or take responsibility for another heinous legacy of the war: the spraying of toxic Agent Orange over vast areas of the country.

Washington has compensated American veterans affected by the spraying, and is cleaning up toxic sites at the Da Nang and Bien Hoa airports, but so far we have refused to help the millions of Vietnamese victims of Agent Orange, or address the many birth defects, disabilities, and illnesses that continue to afflict the offspring of the victims.

A news story this week from Da Nang gives hope for possible change. Hats off to Veterans For Peace colleague Chuck Searcy for sharing the story.

During the recent port call in Vietnam by the aircraft carrier USS Carl Vinson, sailors from the ship visited two centers for disabled children, including one run by the Da Nang Association of Victims of Agent Orange. During the visit members of the Navy band played “Noi Vong Tay Lon,” a Vietnamese song about national unity that was popular during the war.

Reading that story brought tears to my eyes. I too played in a military band during my time in the Army. Mostly we played military marches.

How much more I would have enjoyed playing for the kind of mission the sailors of the Carl Vinson performed! For that I would have played my heart out.

The Navy visit was mostly symbolic, it may be a first step toward taking responsibility for addressing this vital humanitarian legacy of the war. 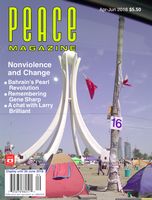 Search for other articles by David Cortright here