2017 Nobel Peace Prize Awarded to ICAN: Where do we Go From Here?

When this year’s Nobel Peace Prize was announced last summer, some of us wondered how a little-known campaign from Melbourne made its way to the international stage. The International Campaign to Abolish Nuclear Weapons (ICAN) is a coalition of NGOs active in 100 countries promoting the Treaty on the Prohibition of Nuclear Weapons (TPNW). The group’s ground-breaking efforts to achieve the ban was honoured by the Nobel Committee and for their work in drawing attention to the catastrophic consequences that a nuclear war would inflict on humanity.

The prize was awarded to ICAN in Oslo on December 10, and the acceptance speech was delivered jointly by Beatrice Fihn, the executive director of ICAN, and Setsuko Thurlow, an 85-year-old survivor of the Hiroshima atomic bomb and long-time Canadian living in Toronto. Setsuko’s photo is shown on the cover of this magazine, along with Costa Rican Ambassador Elayne Whyte-Gomez, who chaired the TPNW negotiations. (You can watch the Nobel prize ceremony at youtu.be/P1daV8n6fTY)

The world-wide anti-nuclear movement had been languishing of late, perhaps because of the nuclear-armed states’ steadfast belief that nukes are their prime guarantor of national security. However, according to Mohamed ElBaradai (former head of the International Atomic Energy Agency), the argument that nuclear weapons have kept the peace is bogus. “A peace that hangs on a doctrine of mutually assured destruction” he goes on to say, “is underpinned by a fallibility and, in addition, is irrelevant to extremists. It is a peace that is unsustainable and highly perilous.”

ElBaradai is not alone: In 2015 and more recently on November 10, 2017 at a Vatican symposium for nuclear activists, “Prospects for a World Free of Nuclear Weapons and for Integral Disarmament,” Pope Francis categorically condemned not only the threat of nuclear weapons but also their very possession. He urged his audience, which included representatives from both the US and Russia, to be

“genuinely concerned by the catastrophic humanitarian and environmental effects of any employment of nuclear devices. If we also take into account the risk of an accidental detonation as a result of error of any kind, the threat of their use, as well as their very possession, is to be firmly condemned. For they exist in the service of a mentality of fear that affects not only the parties in conflict but the entire human race. International relations cannot be held captive to military force, mutual intimidation, and the parading of stockpiles of arms. Weapons of mass destruction, particularly nuclear weapons, create nothing but a false sense of security. They cannot constitute the basis for peaceful coexistence between members of the human family, which must rather be inspired by an ethics of solidarity.”

This is the first Pope ever to condemn totally the possession of nuclear weapons. Douglas Roche, who served as Canada’s Ambassador for Disarmament to the UN (1984/89), considers Pope Francis’s stand courageous and significant, though it will irritate officials in Washington and Moscow, as well as defence contractors and their lobbyists. The Pope’s message will undoubtedly be a sobering influence on Catholics everywhere.

Other high-profile people who support ICAN and its objectives, include over 1,000 Order of Canada recipients who have also called for nuclear disarmament; the Dalai Lama; Yoko Ono; and actors Martin Sheen and Michael Douglas.

As tensions grow over the insults and accusations exchanged between President Trump and his counterpart in North Korea, political pundits began worrying that the threats could escalate into an all-out war that neither side could contain.

The Treaty on the Prohibition of Nuclear Weapons is the first legally binding international agreement to comprehensively prohibit nuclear weapons, with the goal of leading towards their total elimination. It was passed on 7 July 2017. In order to come into effect, signing and ratification by at least 50 countries is required. For those nations that support it, the treaty prohibits the development, testing, production, stockpiling, stationing, transfer, use and threat of use of nuclear weapons, as well as assistance and encouragement to the prohibited activities.

A high level gathering of heads of state and foreign ministers is scheduled for May 2018 at UN in New York. All states that have not already done so will be urged to ratify this treaty, though NATO members (and a handful of others) will continue to oppose any moves to dismantle their arsenals. The vast majority of people worldwide however, still want nuclear weapons abolished altogether.

Even in the US there is support for the idea of disarmament. Congress is considering a bill that would disallow first use of a nuclear weapon. How Congress responds to this initiative remains to be seen. At least there is a widening concern in the US about the fact that their president can launch a nuclear attack against another country without congressional approval.

While being briefed on nuclear weapons, Trump had allegedly asked why they couldn’t be used if the US possessed them. That remark alarmed everyone who claimed that the only intended use for the weapons was to deter their own use. However, one may indeed sympathize with Trump’s difficulty in following the convoluted logic of deterrence.

Canada’s Prime Minister Justin Trudeau, and his Foreign Minister Chrystia Freeland, may someday regret having declared the weapons ban treaty “useless.” Not only is this view at odds with that of most Canadians, but in effect it abandons Canada’s tradition of fostering multilateralism and settlements negotiated under UN auspices. This decision also overlooks the positive outcomes achieved in the recent past, such as the bans on landmines, biological, and chemical weapons.

Canada shamefully succumbed to a NATO directive to boycott the last UN debate on a nuclear weapons ban. This decision barely got the coverage it deserves in the media and may still be unknown to many. But the Canadian Pugwash Group, as well as many Canadian citizens, have written to Justin Trudeau rebutting his government’s arguments.

if Belgium, why not Canada?

Moreover, on December 10, former NATO Secretary-general Willy Claes and former Belgian Prime Minister Yves Leterme published an op-ed in the Flemish daily De Standaard, in which they support the TPNW and call upon the government to remove US nukes from Belgian soil. As Belgian politicians, they disagree with their country’s assumption that the treaty is incompatible with NATO membership. They claim that Belgium can sign the treaty without leaving NATO. Their reasoning applies equally to Canada. They write,

“The Treaty of Washington, which founded NATO, does not mention nuclear weapons at all. The UN ban treaty does not include any language that would impact Belgian participation on joint NATO exercises, as long as nuclear weapons are not involved in these exercises.

“A Belgian signature would not mean that Belgium cannot be a reliable NATO partner. Several NATO member states already have a national policy that limits participation in nuclear NATO activities. Denmark, Norway and Spain do not allow deployment of nuclear weapons on their soil in peacetime, while Iceland and Lithuania prohibit any deployment of nuclear weapons on their territory. Iceland, Denmark and Norway also prohibit the passage of nuclear marine ships through their ports. Such restraints do not mean that these countries are not contributing to NATO in other ways.”

Such arguments, if repeated by enough Canadian citizens, may influence the Prime Minister and the Foreign Minister’s thinking before the High Level UN Conference meets next May. Perhaps — who knows? — Canada may bend to the wishes of its citizens to sign and ratify the TPNW. As Setsuko Thurlow exclaimed: “Let this be the beginning of the end of nuclear weapons!” 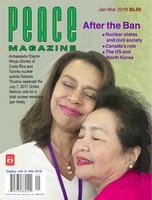