Hope Not Fear: Building Peace in a Fractured World

Doug Roche needs no introduction to Canadian peace activists. Since serving as a parliamentarian from 1972 until 1984 and chairing the UN Disarmament Commission in 1988, Roche has educated us all on the dire consequences of remaining passive observers of the growing risks.

As Steven Hawking warns, humans have the technology to destroy the planet we live on, but not yet the ability to escape it. How can we possibly stop the ruinous arms race and inter-related crises-mass migration triggered by famine, drought, crop failures or oppressive governments?

Roche prefaces his answer by noting the progress that humankind has already made. Wars between nations have virtually ceased, and civil wars have been reduced: “Virtually every index by which we measure world progress is accelerating upwards.” He cites The Economist: “For most people on earth, there has never been a better time to be alive.”

But this hopeful book does not offer an idealistic construct of the world or an unrealistic/ mindless optimism when he refers to a culture of peace, which someday is bound to replace the current culture of war. Addressing the whole array of catastrophic threats, he sees them as inter-related and requiring a comprehensive set of solutions.

He stresses first the connections between conflict and global warming. Ethnic rivalries, violent weather, tidal flooding, melting ice in the polar regions create massive disruptions for humans and animals alike. This should empower peace groups to refute the conviction of militaristic nations that nuclear weapons remain their sole guarantor of national security.

Roche justifiably calls this conviction an outright lie, repeated ad nauseum since Hiroshima. The UN and such organizations as the Middle Powers Initiative and Physicians for the Prevention of Nuclear War have worked with and enjoined leaders and societies worldwide, to challenge this deception. He observes with optimism that more and more countries—particularly those of the Non-Aligned group—are increasingly critical of nuclear states that continue to modernize their arsenals without letting up.

The nine nuclear nations still possess collectively about 16,000 nuclear weapons, of which at least 2000 held by Russia and the US alone, are on high alert 24/7. This means they can be launched in a matter of minutes. Misinterpretation of a signal, a false alarm or accident could trigger a launch and a counter-reaction from the adversary. Once started, there is no way to stop the conflict; and we all know the heavy cost in lives and resources such a disaster would involve.

Those of us who remember the horrors of Hiroshima and Nagasaki have heard these warnings repeated over the past few decades every time a nuclear missile is tested. Roche reminds us also, of two mistakes of overwhelming magnitude when a wedge was driven between the West and Soviet Russia following the end of WWII. Even after the Soviet government collapsed and the Berlin Wall was torn down, Western nations led by the US lost the opportunity to help Russia adjust to a completely new system, as was done in the mid-1940s under the Marshall Plan for Western Europe.

The growing mistrust between East and West was amplified, Roche writes, when NATO began inviting former satellites under the Soviet regime to join this military organization, despite a pledge made to Gorbachev to refrain from doing so. If NATO was concerned about providing common security for Europe and North America, it should have included Russia; however, American hubris prevailed. The annexation of Crimea was Russia’s response to NATO’s expansion.

More recently, NATO members including Canada were ordered to vote against any UN Resolution aimed at the banning of nuclear weapons. To the consternation of many Canadians, Ottawa quietly complied! Thus the struggle to move toward a nuclear-free world will take time and determination, but it is a moral imperative that is gaining strength.

Despite a resurgence of fascist extremists (even in Canada) and insufficient support for the valiant work of UN organizations, there are signs of positive shifts in public attitudes: gender equality, expanding the role of women, better access to education for youth and a growing thirst for social justice are some of the promising developments we need to encourage.

Douglas Roche deserves our commendation for his tireless work for peace and justice. 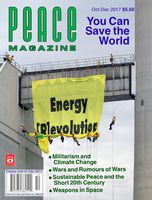