I find it disturbing to read the discussion about how much money Can­adians should be investing in military matters, while it seems that some of our political leaders do not consider investing in a Department of Peace. This is an organization that Canad­ians could take pride in supporting.

Is there really a foreseeable danger of Canada being attacked by an outside military force? If so, then we should be told who these invaders might be.

Obviously, the people who invest in the manu­factur­e and the sale of weapons of war do not do so for their own entertainment. They try to convince Canadians that they need a substantial military force to protect themselves against as an enemy.

But the word “enemy” is too harsh a description of people with whom we have disagreements.

It costs far less to settle disagreements through negotiations than through military force.

The latest North Korean missile tests are getting more successful. This raises anew the question of how the US and other governments should respond. An effective strategy is needed for countering the growing threat from Pyongyang.

The key to success is partnering with China. Beijing has all the cards in this game. No strategy can work without its full cooperation. The US and China have similar objectives on the core strategic issues at stake. Both want a nuclear-weapon free Kor­ean peninsula, a halt to further nuclearization, and stability in the region. China is opposed to regime change, and it has encouraged and benefited from Pyongyang’s steps toward market reform. The US has no strategic interest in who rules in North Korea so long as the regime is not building nuclear wea­pons and missiles that threat­en us or our allies in the region.

Here is a diplomatic package that has some chance of working: Prepare a tough new UN Security Council sanctions resolution, imposing additional measures as recommended by the UN sanctions committee panel of experts and others, but sus­pend action on those measures to allow for diplomatic engagement.

For the US and China, acting on behalf of the six-party framework, the dip­­lomatic model should be the 2015 Iran deal, and also the 1994 Ag­reed Framework with North Korea, which froze the main part of Pyong­yang’s nuclear program for about eight years.

Combine the threat of new sanctions with an offer to lift sanctions and provide a package of security, economic and diplomatic inducements. These would be contingent on North Korea taking specific verified steps toward halting the further development of nuclear weapons and ballistic missile capability.

Military threats or sanctions without incentives have not worked in the past and are unlikely to succeed now. A creative new approach is needed that partners with China in addressing North Korea’s security and economic needs as inducements for freezing its nuclear and missile programs.

I used to believe that nuclear weapons were the only grave threat to the survival of humankind—apart from potential natural disasters like volcanoes. But the new threats to our survival now are man-made, and our politicians need to approach them rationally—all at the same time. I guess they need a push from public opinion to get going.

The world has enough experts to come up with a list of solutions if we’d just get them together and tell them to make a plan.

Clearly some new problems have to be added to the regular risks we are inured to. One is the prospect of unemployment for large sections of the population, if not indeed the majority of us. The robots will be taking over and we need to devise new substitute activities for the jobless. Is this notion of a basic income for everyone workable? (Dauphin, Manitoba had a trial scheme for five years in the 1970s). How will we spend all the free time? If we don’t work out ways for people to live purposeful lives, this will endanger civilization. It’s not only a matter of money but also dignity.

And another looming risk to our survival is the possibility of having our digital and electronic equipment hacked by malevolent people. These deliberate attacks such as WannaCry are only the start. We’d better push politicians to get ready for more. 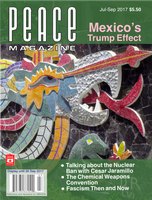