Trump and the Nuclear Codes: How To Launch a Nuclear Weapon

There has been a lot of talk about the fact that now Donald Trump has his finger on the “button” used to launch nuclear weapons. But the president does not actually have a “button.”

Instead, when he became president he was given nuclear codes that enable him to launch a nuclear strike.

What does that actually mean?

The US nuclear launch system is built for speed: it is designed to allow the president to be notified of a warning of an incoming attack, be briefed on the specifics, decide what to do, and launch the response, all in less than the 30 minute flight time of an attacking long-range missile.

This demanding timeline was established during the Cold War to allow US land-based missiles to be launched on warning of an attack, before the attacking missiles could land and destroy them in their silos. It persists today despite the fact that most US nuclear weapons are deployed on submarines at sea, which are invulnerable to such an attack; quick launch of land-based missiles is therefore no longer needed for deterrence.

The short timeline means in practice the president may have less than a minute to be briefed by military officers and his advisors, and have fewer than 10 minutes to decide whether to order a launch.

Warning of attack could come when the president is essentially anywhere, with no time to get to the White House situation room or the Pentagon.

The only way to make this system work is to ensure everything the president needs to order a launch is never far from his side. So he is constantly escorted by a military officer carrying a 45-pound “nuclear briefcase,” typically called the “football.” The football contains, among other things, a secure communications system and the “black book” that lists the menu of preset launch options the Pentagon has drawn up.

The Nuclear Codes: Who’s Who

The president could also, in principle, use the football to order a nuclear strike that was not in response to an attack.

No matter why he ordered a launch, the president needs a way to convince those in the military who actually carry out the launch order that he really is the president and not, for example, a Russian hacker.

That’s where the “nuclear codes” come in. They aren’t codes to actually launch missiles, but to allow the president to prove he is authorized to order a launch.

The codes are a list of letters on essentially a 3×5 card, called the “biscuit,” which are updated daily. To prove he is the president, he must be able to provide the right code from the list on the card. The card may be carried in the football, although some presidents have chosen to carry it with them.

Once the president has provided the proper codes for the day, no one has the authority to stop the launch process.

Once the president has provided the correct identification codes and his launch option over a secure communication line, officers in the Pentagon’s “war room,” or National Military Command Center (NMCC), send out encrypted messages, called the Emergency Action Messages (EAMs).

The EAMs are the actual launch orders giving the details of the launch. The EAMs would go, for example, to the officers in the various underground Launch Control Centers who would launch US land-based missiles.

The EAMs specify the launch plan, including the targets and number of warheads to be launched, and the time of the launch. They also contain launch authorization codes that allow the launch crews to confirm that the order is real by comparing it to codes they have in their safes. These are called “sealed-authentication system” (SAS) codes.

Once the EAM arrives, ICBM crews can launch their missiles in 60 seconds and submarine crews can launch in 12 minutes. In that time, the US could launch some or all of the roughly 900 nuclear weapons it keeps ready for immediate launch. The remaining deployed weapons in the US arsenal would take longer to launch. These include aircraft carrying bombs and cruise missiles, and missiles on submarines at sea but out of range of their targets.

Reprinted with permission of the author. David Wright is co-director and senior scientist, Union of Concerned Scientists.
For a discussion of presidential authority to launch, see blog.ucsusa.org/david-wright/presidential-nuclear-authority

So, the Russians Have a “Nuclear Football” Too?

Of course, Russians also have a way to authorize the launch of a nuclear war, but their arrangements are not the same as in the US, where democracy requires that the military be under the control of elected civilian politicians. The Soviet (and now Russian) system is called “Cheger,” and consists of three briefcases, belonging to the president (previously the general secretary of the Communist Party), the minister of defence, and the head of the General Staff (the military command). Thus two of the three persons are top military officials, and only the president is civilian. It is a secret whether they are able to authorize the launch of nuclear missiles only together, or as a pair, or alone if the others are incapacitated.

In the early years of the nuclear arms race, these bombs were considered simply as the best new military hardware available for fighting and winning a war. However, when Russia acquired its nuclear arsenal it became clear that, unlike any previous wars in history, one fought with these new weapons could end human civilization entirely. Robert McNamara, as US Secretary of Defence, promoted the idea of deterrence— that the purpose of nuclear weapons should be, not to win a war, but to prevent one. If both sides held weapons that could deliver a devastating second, retaliatory strike, both sides would recognize that starting such a war would be suicide—so no sane leader would ever do so. This policy of “Mutual Assured Destruction”(MAD) is still officially the policy of both the US and Russia.

However, in Russia, only the military make military decisions. It is the responsibility of civilian political leaders and diplomats to use the threat of MAD so as to deter American war-makers. Then, if deterrence fails, war begins, and it will be the military planners who decide how to fight. Their plan is to do everything possible to win. Even knowing it to be suicidal, they would use all their nuclear weapons without hesitating. 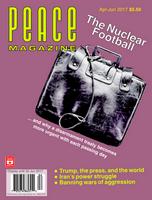 Search for other articles by David Wright here