Riding the Nuclear Tiger: The Fear of Disarmament Both countries face the same dilemma: Their ownership of nuclear weapons is fraught with stupendous danger, and yet they fear disarmament even more. Neither of them exactly wants these nuclear arsenals but they are scared to give them up. So how did they get into that strange predicament?

If the real basis for US-Russian enmity were just a contest over vital interests such as land, water, oil, or technological assets, we might object to their militaristic reactions but at least we could easily understand them.

But actually the Russian-American enmity has never been about incompatible interests but is long-standing mistrust over nuclear weapons dating back to World War II. But if it was originally avoidable, it has since become plenty consequential.

The world’s nuclear arms race arose as a classic case of a “security dilemma,” a situation in which one state tries to make itself more secure by building up its defences. Its counterpart, interpreting the new weaponry as offensive, responds by building up its own defences, which the first state considers offensive, and so on, with an arms race resulting.1

Such indeed was the origin of nuclear weapons. Having surmised mistakenly that Hitler was building an atomic bomb, the Americans built one first. The Russians, suspecting that they were an intended target, built their own. One after another, nations acquired nuclear weapons for their own defence, prompting others to do likewise.

This seemed necessary because there was no other defence against an atomic bomb—no nuclear-proof vest and no vaccine against radiation. The only defence was to threaten massive retaliation. This is deterrence—a warning that whoever lobs over the first nuke will receive an equal or worse response.

Of course, threats can’t solve a security dilemma. If one party mistakes the other party’s intentions for aggressiveness, then the solution is not to _ confirm_ that perception but rather to offer reassurances. What may help are confidence-building measures to restore trust. But strategic analysts are not trained to reassure their enemies, but instead to be “hardliners.”

Roosevelt was an exception. Although he knew the atomic bomb would make Stalin suspect his intentions, he believed that he (and he alone) could reassure Stalin and prevent an arms race. Had he lived and succeeded in this, atomic bombs might have been outlawed during the UN’s first General Assembly in 1945. Who knows?

As countries acquired nuclear deterrents, it was not always clear whom they intended to deter. The French, for example, expected to be attacked by no one in particular but their new weapons seemed to make them feel stronger so they kept them.

Initially, people regarded atomic bombs simply as better tools for winning. Everyone knew that victory in a war would belong to the side with the most lethal weapons. In pursuit of an infinitely large arsenal, Americans and Russians kept building more and bigger bombs than they had any plausible targets for.

But the Cuban Missile Crisis shocked Kennedy and Khrushchev. Kennedy, in search of a solution, heard about a psychologist-peace researcher named Charles Osgood, who was studying tension reduction between states.2 Osgood said that when there are real grounds to suspect others’ intentions, one cannot simply_choose_ to trust them anyway, but must keep a “minimum deterrence” while working to improve the relationship. He recommended an incremental series of conciliatory unilateral initiatives. They should be varied in nature, announced ahead of time without bargaining, and continued only in response to comparable actions from the other party. He called this approach “GRIT” — Graduated Reciprocation in Tension Reduction.

One of Kennedy’s aides worked with Osgood in writing Kennedy’s famous speech at American University. Next Kennedy declared a unilateral moratorium on US nuclear tests in the atmosphere. Khrushchev stopped jamming Western broadcasts, stopped producing Soviet bombers, and announced the Soviets’ own moratorium on atmospheric tests. Kennedy approved a sale of wheat to the Soviets. They kept reciprocating friendly gestures as an “arms race in reverse,” and within weeks the Limited Test Ban Treaty of 1963 was signed.

But GRIT ended when Kennedy was killed.3 And Khrushchev’s ouster shows that reassuring the enemy is not a risk-free activity, for it can be perceived as a sign of weakness.

Almost the last multilateral accord was the Non-Proliferation Treaty (NPT). From then on, nuclear negotiations would be mostly bilateral deals between the two superpowers to maintain “strategic stability” based on parity or balance. This is still the paradigm of those who are supposed to negotiate nuclear disarmament. Parity and stability are their goal, not the abolition of weapons.

All nuclear states practice deterrence, but only the US and Russia are locked in the uniquely bizarre form of deterrence called MAD—short for “mutually assured destruction.” These two states try to maintain parity in the quality and quantity of their weapons. They are the only states with “counterforce nuclear potential” — the capacity to target their opponents’ military installations. Other nuclear states target only “countervalue” sites such as cities and factories. Only the US and Russia can strike their targets preemptively, and therefore only they have early warning systems. Only the US and Russia keep their nuclear weaponry on high alert so they can launch within minutes after receiving a warning.4

MAD did not exist from the beginning of the nuclear age. It was Robert McNamara who created it. He realized that both arsenals were so large that neither country could totally destroy the other’s nuclear weapons. Many nukes would survive a first strike and be launched in retaliation, destroying the attacking country and civilization itself. Thus nuclear weapons would win no wars but only be instruments of suicide.

Yet McNamara offered a rationale for keeping such horrible things. He claimed that paradoxically, precisely because their effects are suicidal, nukes actually protect their owners. Because either side would be committing suicide by using its nukes, they will both just sit there and hold them indefinitely. The bombs will protect both countries from each other. McNamara’s brilliant insight was the ideological basis for MAD. Even most peace activists saw a grotesque but unassailable logic in it. But if that was true in the 1960s, it is no longer reasonable today, though it is still the basis for hawkish plans.

It would be rude to call the proponents of this doctrine “MAD men,” so I just call them “nuclearites.” They come in two types: professionals and amateurs. It is the “professional nuclearites,” the people in charge of their country’s arsenals, whom I pity most. They are riding tigers. Because they still believe that nuclear weapons keep them safe, logically they must also believe that disarmament would be terribly dangerous.

McNamara realized that if one side found an effective defense against nuclear weapons it could attack but defend itself from the retaliatory strike. That would ruin the whole protective nature of MAD. The nuclearites concluded therefore that no one must be allowed to develop a defence! Let’s make a treaty pledging to remain vulnerable to each other.

The Anti-Ballistic Missile (ABM) Treaty of 1972 was that treaty. It formally established MAD as the official policy governing the relationship known as the Cold War. The ABM Treaty and SALT I were the first bilateral negotiations in the Arms Control Regime. McNamara had trouble convincing Premier Kosygin that mutual security could be attained only by leaving one’s own side vulnerable. Already there were rudimentary defences around Moscow and Washington, and common sense would have called for more and better ones. But several high level Soviet Pugwash participants accepted this paradoxical new doctrine and, when they went home, convinced their leaders to adopt it.5

But Gorbachev was no nuclearite. At Reykjavik he surprised Reagan by proposing that they trust each other and get off their tigers by abolishing their nuclear arsenals. Reagan was tempted. Not much of a nuclearite himself, he wanted to hedge his bets. He’d disarm his nukes while also creating a ballistic missile system that, if ever installed, would itself violate the ABM Treaty. But the two men failed to reach an agreement, much to the relief of their advisers, who were all nuclearites. When the delegations went home, everyone conveniently dropped the subject of nuclear disarmament and talked only about negotiating new and balanced arms reductions. MAD and the Arms Control Regime were saved, at least for a while.

Though Gorbachev ended the Cold War, Russians still hate him for gambling with their superpower status. And indeed, he took risks that in retrospect seem reckless. When Americans promised not to move NATO “one inch to the east,” he should have demanded a written pledge.

Gorbachev authorized the INF Treaty in 1987, which Yeltsin followed with START I in 1991, START II in 1993, and the CTBT in 1996. The two nuclear arsenals have declined to 14,400 in 2016.7 However, each treaty in the arms control talks has reduced weapons incrementally less than the preceding treaty. Disarmament is coming to a halt, especially under Putin.

Worse yet, the quality of these arsenals has been increasing. Both countries are “modernizing” and improving their weapons. There is serious talk in Russia about abrogating the INF Treaty.8 Accidentally on purpose, Russians exposed on TV details of a new guided missile torpedo with a cobalt warhead that could kill all living things along a North American coastline.9

I cannot find a Russian expert who would agree to prohibit all nuclear weapons. Even the most thoughtful of them, Alexei Arbatov, while alarmed about current trends, aspires only to revitalize the arms control regime. I have searched in vain for Russians who advocate reassurance and total disarmament instead of strategic stability, parity, and MAD. Friends tell me that anyone promoting total nuclear weapons prohibition would be considered a traitor to his country.

But Arbatov cannot save arms control, for its day is past. We face two equally alarming prospects, only one of which can be affected whatever by bilateral arms control negotiations: That is the worsening relationship between Russia and the West. Even so, further incremental reductions of weapons will not overcome their mutual hostility, though GRIT might. To restore trust, what might help are a new series of unilateral initiatives and a strong dose of Gorbachev’s “New Political Thinking.”

Bilateral arms control talks are now inadequate to solve the crisis. Putin himself insists that future negotiations must include all nine nuclear weapons states. That’s not wide enough. Let’s have truly multilateral negotiations—open to all members of the UN, not just the nuclear states. That’s what the UN’s Open Ended Working Group recommended.

And equally urgent is the other great nuclear threat of our day: terrorist access to bombs. Today US experts express surprise that no terrorist nuke has been detonated yet.10 ISIS is seeking one, and its suicide bombers don’t fear death, so MAD couldn’t deter them even if terrorism were put on the arms control agenda. Nuclear terrorism is obviously beyond the scope of bilateral arms control, yet the nuclear states reject the only approach on offer today that might address it: the October 2016 UN resolution for abolition (see article, page 12).

The most promising way forward is total disarmament under robust verification. Our job is to persuade professional nuclearites to get off their tigers and join us in this project. Come on, guys! Those bored old animals are not going to bite!

Metta Spencer is editor of Peace and author of The Russian Quest for Peace and Democracy . 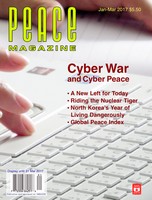