This Free Trade Deal is not Free

The proposed Trans Pa­cific Partnership [TPP] is being sold as a “free” trade deal. The “free” does not necessarily mean that it is free or fair for all stakeholders.

The TPP involves Canada, the USA, Mexico, and nine other countries. For years the Harper Conservatives secretly negotiated this deal. And it is now apparently being supported by Prime Minister Justin Trudeau. He has stated that he will listen to Canadians who wish to make comments about the TPP, but that opportunity will end by June 30th. 2016.

Nobel Prize-winning eco­n­­omist Joseph Stiglitz, is warning Canadians that the TPP “is the worst trade deal ever.” Social justice icon Stephen Lewis made this statement: “No government of Canada in this day and age should embrace the discordant siren song of free trade.” Jim Balsillie, one of Canada’s most successful entrepreneurs, has stated that the TPP would be “the worst thing in policy that Canada has ever done.”

Canada already is one of the most sued developed country in the world. In Quebec, a moratorium has been placed against Lone Pine Resources for fracking operations in that province. That company now intends to sue Canada for $250 million for lost profits! Canada is now also facing $2.6 billion in corporate challenges, due to our environmental protection programs, which are allegedly interfering with profit-making of foreign corporations.

Presently Canada pays the second highest drug prices in the world. The TPP would extend drug patents for pharmaceutical corporations and oppose the use of generic drugs.

Regarding food safety, the TPP would allow milk and dairy products from US cows that have been injected with the bovine growth hormone, which is linked to animal and human risks, to be sold on Canadian grocery shelves. You may recall that in the 1990s, civil society blocked this hormone from being used in Canada.

Certainly, all Canadians are supportive of fair trade. However, we do not need to become involved in “free” trade deals that are designed for Canadians by global corporations.

Hats off to Joe Cirincione, President of the Plough­shares Fund, for his brilliant take down of David Samuels’ May 8th New York Times Magazine article and attack against the Iran nuclear deal. Cir­in­cione counters Sam­uels’ distortions about the negotiated agreement and shows the importance of defending it against those who would tear it up.

Samuels’ article is mostly about Ben Rhodes, the influential speech writer and com­­­munications guru in the National Security Council who has helped to shape President Obama’s thinking on foreign policy over the past seven years. Rhodes also played an important role in winning support for the Iran deal. When the official implementation process began earlier this year many of us hailed the agreement as a triumph of diplomacy over war.

Not Samuels. He portrays it as a White House propa­gan­da coup engineered by Rhodes and a step toward US disengagement from the Middle East. As Cirincione writes, the Samuels critique is “utter nonsense.”

So far the agreement has produced positive benefits. Iran has removed two-thirds of its uranium enrichment capacity, shipped almost all of its enriched uranium fuel out of the country, completely dismantled its plutonium production reactor, and accepted “an airtight inspection regime tough­er than any ever negotiated.” In return the US and the European Union have lifted nuclear-related sanctions. As long as the deal remains in force and implementation continues, Iran cannot develop a nuclear weapon.

The expectation of this outcome is why hundreds of retired generals and admirals, former diplomats, nonproliferation experts, scientists and religious leaders endorsed the Iran deal. Several Israeli former military and intelligence leaders and former US ambassadors to Israel also supported it.

The Ploughshares Fund, the Iran Project, the Na­tion­al Iranian American Coun­cil, the Arms Control Association, the Win With­out War coalition, and many other progressive foreign policy groups in the US mounted substantial educational and advocacy efforts in support of the agreement.

The debate generated by the Samuels article reminds us that we must not only fight to achieve victories but also work to defend those victories against counterattack. Right wing political forces in Israel and the US have not abandoned their opposition to the Iran deal. 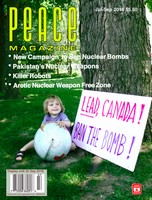