Signs of Change on Nuclear Disarmament?

Established to develop legal measures and norms for achieving a nuclear weapon-free world (Peace, January 2016), the Open-Ended Working Group (OEWG) held its first meeting in February in Geneva, with some 90 nations attending. Stridently boycotted by the nine nuclear weapon states (NWS), the OEWG is not bound by consensus, the rule ensuring their control. It also has civil society participation.

It is hoped the OEWG will galvanize international public opinion and break through the paralysis in nuclear disarmament. Against the Netherlands’ and Australia’s claim that nuclear weapon state participation would have been beneficial, Austria countered that their modernizing of their nuclear arsenals to last for the next half-century created mistrust and the desire for disarmament action.

For Malaysia and Mexico, the platform giving voice to the non-nuclear weapon states is the rise of the humanitarian impact initiative through three preceding conferences and the humanitarian pledge endorsed by 127 nations.

Among options, a nuclear weapons convention with a time-bound program to verifiably eliminate these WMD would require NWS participation. A ban treaty not requiring universal participation emerged as more practical. The essential for attaining and maintaining a world free of nuclear weapons was seen as a multilaterally negotiated prohibition on production, use, stockpiling or transfer of nuclear weapons and of fissile material for them, as well as facilitation or assistance for these. This is the pathway that stigmatized other weapons (anti-personnel land mines, cluster munitions), establishing norms, so it might be an effective measure to achieve a nuclear weapon free world. The building blocks approach proposed by NATO allies was seen as similar to the step-by-step approach which has stalled.

So a ban treaty emerged by the third day as the favored way forward. Current blockages identified included: non-NWS hosting nuclear weapons in their territory, their participating in nuclear war-planning, claiming protection, contributing to modernization, and financing nuclear weapons-producing companies.

Claims that the humanitarian approach ignores security, and that nuclear weapons are a guarantor of security were rebutted by stress on heightened risk for countries relying on nuclear deterrence; and the emerging threat of cyber-terrorism attacks on launch mechanisms.

The final focus was on improving transparency about nuclear weapons and reducing risks of accidental or deliberate detonation, with calls for more honesty and for honouring the call of the majority of nations for steps to reduce operational readiness status, reduce or eliminate nuclear weapons in security doctrines, and provide transparency about nuclear weapons on their territory. The proposal for a ban treaty is now clearly on the table. Hopes are running high for the next OEWG meetings in May and August!

Stéphane Dion’s speech at the Conference on Disarmament

In his speech on March 2, Minister of Foreign Affairs Stéphane Dion announced Canada is ready to help get the stalled Committee on Disarmament (CD) back to work. He urged that “we need to set realistic objectives, taking contemporary strategic realities into account” to contribute to peace tangibly. Claiming today’s environment does not encourage nuclear weapon states to participate in negotiating a nuclear weapons ban, he asserted it “would not bring us any closer to our shared goal of a nuclear weapon-free world.” He wants “incremental, concrete, realistic, verifiable” steps within the Non-Proliferation Treaty context: increased transparency, moratoria on nuclear tests and fissile material production, security assurances, establishment of NWFZs, and work toward the NPT’s universalization. And from the OEWG he wants “a balanced constructive report” on disarmament measures.

The trouble with Dion’s hopes for incremental progress is the 20-year paralysis of the CD and the unfulfilled paper promises of nuclear disarmament steps in the 2010 NPT Review Conference action plan. The claimed security of deterrence means huge investments by all the NWS in modernizing their nuclear arsenals. The Bulletin of the Atomic Scientists clock stands at three minutes to midnight and experts agree we’re at greater nuclear risk than ever before. Time for the Liberal government to realize that, far from guaranteeing us security, nuclear weapons make everyone more insecure! The NWS and their umbrella partners—including Canada, a NATO member—accept use of these horrific WMD under some circumstances since they train people to use them and they keep 1,800 of them on high alert, risking detonation by accident, technological glitch, or human fallibility, mental illness, or drug/alcohol addiction (with known operational dysfunction at US missile bases).

And what they accept includes first-strike options. With catastrophic consequences for all of us implicit in nuclear risks, the greater common good is the issue. And remember, it was Canada that spearheaded the Ottawa Treaty—the land mines ban treaty— in a process outside the UN!

Phyllis Creighton is a member of the Science for Peace working group on nuclear weapons. 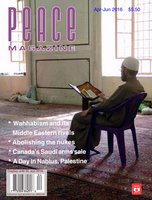