The Canadian Voice of Women for Peace (VOW) held its annual awards dinner on November 6, 2015. This year’s four honorees, who include a 17-year-old filmmaker, have one thing in common: they have dedicated their lives to promoting the culture of peace.

The awards were named for women who did remarkable work and have their footprints in promoting culture of peace and nonviolence: Muriel Duckworth, Anne Goodman, Shirley Farlinger, and Kim Phuc.

The Muriel Duckworth award was presented to Betty Peterson and Eryl Court for their commitment to peace activism. Court, whose peace loving energy filled the room, was present in the event to receive the award. She participated for decades in peace related issues and organizations exemplifying her “passion and steadfast determination to join hands with other dedicated to a peaceful planet fit for all.” Peterson was present in spirit. She tirelessly dedicated time and energy to many of “civil society’s peace and social justice communities.” Duckworth, whom the award was named after, was a founder of the Nova Scotia Voice of Women for Peace in 1962, and the President of National VOW from 1967 to 1971. She remained an active member of VOW for the rest of her life.

Advocating for the culture of peace cannot be achieved without the efforts of writers and journalists dedicated to the cause. The Shirley Farlinger award was presented to Erika Simpson for her commitment to peace writings. Simpson’s ongoing drive to work on peace issues through written word “contributes generously to advancing public understanding.” Farlinger, for whom the award was named, believed in the power of pen. It was reflected in her writings.

VOW presented the Anne Goodman award to Penny Sanger for her commitment to peace education. Sanger, who is a journalist, pioneer woman editor, author, advocate and community organizer, worked hard for fifty years developing peace education. Goodman, who was a long-time VOW member and volunteer, co-founded and led Inter-Change: International Institute for Community-Based Peace building, which collaborates on educational and research projects with like-minded activists around the world.

The Kim Phuc award was presented to Kasha Sequoia Slavner, 17-year-old, for her youthful commitment to peace leadership. Slavner is a filmmaker who promotes the idea of global citizenship. She is an inspiration with her wide exploration through the arts and documentary films to tell stories of hope and international change makers. Slavner, a dedicated VOW member, joined the organization’s delegation on three of their annual trips to the United Nations’ Commission on the Status of Women. Those trips and VOW’s youth camps inspired her to create the Global Sunrise Project to use her storyteller talents to promote global peace. Last year, she traveled the world with her mother for six months in search of stories of inspiration. Known as the Sunrise Storyteller, she has been working on her documentary film and compiling a book of her journey. In addition, she continues to hold and participate at photography exhibitions with her work. “I have spent a lot of time working on this project, and having this recognition is encouraging for me to continue my work,” says Slavner. The award is named after Kim Phuc, a honorary VOW board member and UNESCO Goodwill Ambassador for the Culture of Peace.

“My message to youth peace builders and social justice advocates would be to find your cause and take action now,” says Slavner. “There is no better time to make the world a better place, and we really have the power to make impactful change.”

This is VOW’s second annual awards dinner, and is an opportunity for VOW to present and honour the work of women whom the awards were named after and the awardees.

Yusur Al-Bahrani is a member of Voice of Women. 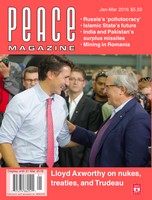