The actors are trying to see how far they can push. The conflict in Ukraine is the result and there are no diplomatic trade-off solutions at hand.

The Ukrainian crisis has provoked a serious and dangerous breakdown of relations between Russia and the West—so serious that a new “reset” will not do much to improve the situation. If we are to avert a revival of Cold Wars and the arms race—to say nothing of other threats looming large, including climate change, growing shortages of fresh water, food shortages, international terrorism, cyber security, pandemics, and so on—something more like a full “reboot” is required.

It is clear that the external and internal roots of the situation in Ukraine run deep. On the global level, it is a symptom of the existing world order’s growing dysfunctionality. This was triggered by a failure to adjust it to new realities after the end of the Cold War. The gap between the world’s growing interconnectedness and its inadequate coordination capacity has created a vacuum, leaving different actors to see how far they could try and push. And it is not surprising that at such times the “upper hand” would go not to those who play best by the rules, but to those who seize the right moment to reject the rules, impose new rules and, when needed, renounce those new rules as well.

Russia routinely and arrogantly exploits the vulnerabilities that have opened up following mistakes and miscalculations by all sides over the past 20 years. China has done the same in its relations with Japan, as has Iran—on the nuclear issues and the religious radicals—all over the world.

Ukraine, on the border of two geopolitical entities, is clearly one of the victims of this process. This is why there are no diplomatic “quid pro quo” solutions at hand now. All the good will in the world will not bring together two major geopolitical entities compelled to pro­tect their interests in ways that must necessarily make the other feel threatened.

From the Russian perspective, NATO expansion has always been seen as treachery—a direct violation of both overt and covert agreements reached with the West at the end of the Cold War. Russia has already had to silently swallow two waves of NATO enlargement. But the possibility of NATO expansion to Ukraine—the soft underbelly of Russia’s perceived security zone—was seen by many as enough of an affront to cause a war.

However, Putin is not just seeking Western concessions on Ukraine. Ukraine is, in fact, only a convenient space in which to apply a new “Russian world” strategy. Certainly, Russia has local tactical aims in Ukraine—relative autonomy for the Donetsk and Lugansk regions, reliable life support systems for Crimea and Transnistria, and a guarantee that Ukraine’s political choices do not undermine Russia’s security. But these are only bargaining chips in the pursuit of the real prize—recognition of Russia as the true and lawful successor to the USSR’s superpower status. In Putin’s eyes, only this will crown him appropriately—and extend his presidency beyond any electoral horizon.

Beyond the Dneiper River

Global forces are also clearly exacerbated by an inherent Ukrainian problem. In Alexander Solzhenitsyn’s memoirs, which he wrote in exile long before the fall of the Soviet Union, he prophetically remarked: “the Ukrainian question is one of the most dangerous issues of our future … As it is useless to tell Ukrainians that we all descended, by birth and spiritually, from Kiev, it is just as useless to expect Russians to recognize the fact that people beyond the Dnieper River are different.”

Solzhenitsyn accurately pointed out the key problem: the conflict of identity that has been translated, after Ukraine’s independence, into two distinctly different development models—one Westward looking and mono-cultural and the other Eastward oriented and multicultural.

More than any other change of government in Kiev since 1991, the overthrow of Viktor Yanukovych last year represented the triumph of the nationalistic perspective held most strongly in western Ukraine. Its leaders were determined, this time, to ensure a winner-takes-all victory that would decouple the country from its historic links with Russia.

But we are not necessarily condemned to a new round of global confrontation. A number of things can and should be done to reverse the dangerous trends and prevent a new division of Europe and the world.

How to Make Escalation Impossible

Globally the “rules of the game” could be changed to make escalation impossible. It’s important to reformulate the international agenda and political frameworks to encourage transformative leadership. The world must stop succumbing to “baby-sitter syndrome,” where the most attention always goes to wherever the most noise is coming from. Current governance and international institutions should be upgraded to harness and channel change, instead of being overwhelmed by it.

Within Europe, the crisis can be re-scaled by working out a common goal of long-term co-development. It must be acknowledged that Europe today is not the center of the world. Its problems are part of a complex global system, where all are affected by all. Perhaps, as once the United States and Canada were made part of the European process, it’s time to think about turning the Euro­pean process into a Eurasian one.

It is time also to stop basing strategic thinking on Tom Clancy’s novels. Peace is not a zero sum game. Security crises are always rooted in perceptions and cannot be resolved by military means. War does not determine who is right—only who is left.

Put simply, setting up a public duel is a bad way to solve a crisis. The West’s views of Russia today are outdated and need to be corrected. Such a correction will be nearly impossible, however, so long as Russia itself keeps believing its own propaganda and fails to define and articulate its long-term interests.

For its part, Ukraine should abandon delusions about its future. Europe is not anxious to bring Ukraine into the EU. Accepting Ukraine into NATO today would be a worst nightmare for the alliance. And no one is going to fight for Ukraine. History and geography binds it for better or worse to be a neighbor of Russia. This is not in fact limiting its political choices, but rather enhances them. As Russian/Ukrainian saying states—“a friendly calf sucks two mothers” (closest English equivalent—“fair and softly goes far”).

The smartest option for the country is to focus on domestic transformation—economy, social sphere, politics and a new constitution. Donetsk and Lu­gansk, as well as Crimea, could be declared temporarily occupied Ukrainian territories, along with assurances that there are no plans to reclaim them by military force.

A reliable defense of the new disengagement line should be organized, with international peacekeepers, to push responsibility for social and economic development where it now belongs: the separatists and the occupational forces. In parallel, cultural auto­nomy (language, schools, regional tax systems, etc.) should be provisioned for the regions willing to reintegrate in Ukraine in the future.

New architecture should provide an integrated agenda for progress on security, energy, and economic cooperation as well as coordinated efforts to address frozen conflicts. And most urgently, joint and concerted efforts are needed to take Ukraine out of a condition of social and state breakdown, and turn it into a hub of cooperation rather than East-West competition prize.

Alexander Likhotal is president of Green Cross International, founded by Mikhail Gorbachev, whom he still serves as adviser. 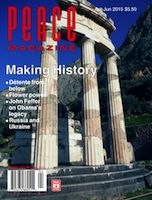 Search for other articles by Alexander Likhotal here