Anti-nuclear weapons movement is heating up

On December 5, the International Peace Bureau (IPB) presented the government and people of the Republic of the Marshall Islands (RMI) with the 2014 Sean MacBride Peace Prize, for its leadership in global efforts to highlight the catastrophic humanitarian consequences of nuclear weapons and to abolish them.

IPB also commended the RMI for submitting the legal case to the International Court of Justice against all nine states owning nuclear wea­pons for failure to honor their disarmament commitments. For­eign Minister Tony de Brum accepted the prize at a ceremony in Vienna.

Besides the case in the ICJ, the Marshallese are suing the US government in an Amer­ican court. The US asks for a dismissal of the case, and their motion will be heard in January. Anyone wishing to learn more and to sign a petition favoring the RMI case can visit this web page:

Besides IPB conference some 600 civil society members from around the world met in Vienna before the conference on the humanitarian consequen­ces of nuclear war, to which 158 states sent delegations. (See page 6, this issue) Instead of waiting for the nine nuclear states to disarm, it seems that the people of the world are preparing to take matters into their own hands and demand total nuclear abolition.

Even some politicians in nuclear states are criticizing the excesses in their countries’ weapons systems; with­­out actually suggesting disarmament, some do propose cutbacks. Thus on Decem­ber 3, California Demo­cratic Senator Dianne Feinstein declared that the US nuclear arsenal is “unnecessarily and unsustainably large.” She wrote “Over the next decade, the Congress­ional Budget Office reports that the Unit­ed States will spend $355 billion on nuclear wea­p­ons ….The United States currently maintains 4,804 nuclear weapons. If you include retired weapons that are awaiting dismantlement and the thousands of components in storage, the United States has the equivalent of around 10,000 weapons. When you consider that the weapons we maintain today are up to 100 times more destructive than the ones used in Hiroshima and Nagasaki, it becomes clear that the only value they offer is in deterring a nuclear attack.”

And critics of Putin are heating up

While President Putin enjoys favorable ratings above 80 percent in Russia, his credibility has dropped markedly elsewhere. In a damning report unveiled Dec­ember 4th in Mos­cow, Hum­an Rights Watch said there is now “full alarm about autocratic rule.” HRW’s director, Ken­neth Roth, noted Russia’s sup­pression of journalism, initially of television but now of the Internet. He added, “And it’s with great disappointment that I see the worst crack down since the Soviet era. The radical reduction of public debate and the airing of dissenting views is the foundation of the authoritarian rule and unaccountable ad­­­venturism that lie behind Rus­­sia’s acute problems today.”

Even more critical than Roth is a celebrated new book by Karen Dawisha, Putin’s Klepto­cracy: Who Owns Russia? (Simon & Schuster). Here Russia’s problems are attributed to Putin personally. Pro­fessor Dawisha has track­ed down an overwhelming mass of documents and court rec­ords, though journalists have been killed for writing_ ones that have since been erased.

It is not news that corruption is endemic in Russia; what is news about Dawisha’s book is that she shows it is the result of planned actions by a group of KGB agents who, in the late 1980s, began to plot their return to power and the restoration of Soviet-style rule. They were initially given control of money to hide overseas, but they stole it.

Putin personally organized several institutions, such as the Bank Rossiya. Dawisha links Putin to Twentieth Trust, a construction company that built villas in Spain where well-known leaders of Russian organized crime lived. She also links him to the Ozero Dacha Con­sumer Co­op­­erative, and to the St. Peters­burg Real Estate Hol­d­ing Com­­­pany, which Ger­man intelligence accuses of laundering money for Russian and Colom­bian criminals.

Dawisha says that more than half of the $50 billion spent on the Olympics went into the pockets of Putin’s cronies. The 110 billionaires in Russia are his long-time friends. And as for the president himself, she estimates his worth at $40 billion.

On November 21, the anniversary of the country’s revolution, thousands of people all over Mexico rallied, expressing anger toward the politicians and police forces who were involved in the murder of 43 missing students in Iguala. A radio commentator, Carlos Ramiriz, said, “The government is just selling the country to the corporate interests and has done nothing on the social level to alleviate the suffering of the people.”

This time middle class families, senior citizens, hipsters, intellectuals and professionals joined the students and activists who had made up the core of the previous protests. 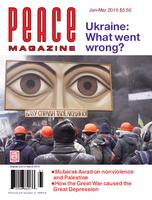