Peace workers have little to celebrate this summer. We can’t claim to have prevented or stopped any wars. And we editors had to make hard choices between the conflicts we’d cover-the war in Gaza between Israel and the Palestinians or the civil war in Ukraine? Like the rest of the world, we have paid too little attention to the wars in Africa, though one of our editors, Joe Davidson, is working in the Central African Republic for Doctors Without Borders. Nor did we react quickly enough to the rapid invasions by ISIS (or ISIL or the Islamic State, whichever name you prefer). We chose to focus on the recurring fights between Israel and the Palestinians in Gaza.

Then in early September President Obama more or less declared war on ISIS-at least to the extent that bombing will do the job. Nobody believes that these brutal ISIS insurgents can be vanquished without “boots on the ground,” but Obama hopes that those boots are not filled with American feet. Belatedly, we have to invent a peace policy as an alternative to his plan. Unfortunately, starting from the current situation, it is hard to envision a promising strategy.

Yet Obama surely knows that his own best strategy also lacks promise. He has tried to exit wars that other politicians started. He even says (at least privately) that he must weigh the chance of destroying jihadists against the likelihood that fighting against them will only convince new young people to become terrorists. Yet when ISIS beheads Western journalists and humanitarian workers, the pressure is overwhelming: “Do something!”

The video recordings of ISIS decapitations are obviously produced for one purpose alone: to goad the West into attacking the jihadists. But why would they do so? Because the more that disaffected young people embrace terrorism, the more certain it is that the US will be defeated. The great Islamic civilization will rise again! A Caliphate will rule the world! A humiliated Arab world will triumph!

The perception that the US was specifically disdainful of Islam arose initially because the US supported Israel unequivocally. By now the justifications have multiplied, as the US has led the fight against Muslims throughout North Africa and the Middle East. But the low status of Islam cannot be blamed entirely on the West. Obama will be unable to win or even conclude the current spate of wars unless the Shias, Sunnis, Alawites, and their various subgroupings learn to live together and share political power. He cannot reasonably hope to achieve that, so the fight against ISIS probably will create more terrorism. American politicians have not learned from their own previous failures, but will press on for a while under the leadership of a tired, gray Obama, who is ambivalent about his own policies.

What should we recommend instead? There is no easy answer, but start with the initial grievance: Stop supporting Israel’s oppression of Pales – tinians. Cut off the flow of money and weapons to the Middle East? especially to corrupt rulers. Work with democratic Muslims to counter radical ideology at home. Stop the drones and the bombing. Pay attention to complaints. 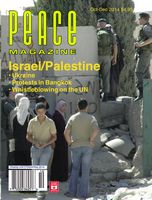