Canada vs. the Arms Trade Treaty?

If you watch the news on TV, you probably see guns being fired every single day. There are more than 650 million small arms in the world, and their effects on humankind are of staggering dimensions. At least half a million persons each year are killed by firearms, and vastly more are crippled, orphaned, or made homeless. Today there are 51 million displaced people and refugees in the world. In your safe living room you witness mass atrocities and economic devastation, but cannot intervene. Indeed, some of the perpetrators may have obtained a weapon or two from your hometown, for the arms trade is a vast international industry—far from transparent—that is worth around $1.7 trillion a year. Even peaceful, affluent countries participate in it.

In 2011, there were 14 countries that exported at least $100 million of small arms annually: the United States, Italy, Germany, Brazil, Austria, Switzerland, Israel, Russia, South Korea, Belgium, China, Turkey, Spain and the Czech Republic. Moreover in that year there were eight countries that imported at least $100 million of small arms: the United States, Canada, Germany, Australia, Thailand, United Kingdom, France, and Italy. You wonder: What has gone wrong in these otherwise respectable countries?

The Evolution of a Norm

It has been obvious all along that some kind of international agreement is necessary to restrain the flow of arms, and various attempts have been made in that direction. For example, the Economic Community of West African States (ECOWAS) agreed to impose a moratorium on imports of small arms and light weapons as early as 2006. Moreover, from the mid-1990s a global campaign emerged, aiming to regulate the international trafficking in small arms and light weapons. It was launched by the former president of Costa Rica, Oscar Arias, who convened a group of Nobel peace laureates to propose ethical standards for the arms trade. Arias’s peace foundation and the Nobel laureates have ceaselessly worked for that cause. Also, Canadians were soon contributing significantly to the project—most notably through the inter-church peace group Project Ploughshares, whose leader Ernie Regehr published in 2007 a comprehensive analysis of Canada’s involvement with the weapons industry.1

At last, on April 2, 2013, at the United Nations, an Arms Trade Treaty (ATT) was adopted—the first evidence of real progress.

Of course, that progress is extremely limited, for it can at best constrain some of the international trade in weapons. The treaty does nothing to regulate the gun business inside sovereign states, where sportsmen, farmers, and hunters (as well as politically engaged criminals) continue to demand ready access to firearms.

The treaty obligates Member States to monitor arms exports and make sure that weapons do not violate existing arms embargoes or end up being used for human rights abuses, including terrorism. The standardized regulations will be enforceable.

During the lengthy process of creating the treaty, some surprising changes have taken place in alignment of nations supporting or opposing it. When Resolution 61/89, the first feasibility study proposal, was introduced at the United Nations in 2006, 153 Member States voted in favor of it and 24 countries abstained. The United States was the only country voting against it. Still, that vote was a breakthrough; it instructed the UN Secretary General to explore such a treaty, and he did so first by forming a working group of governmental experts, and then an Open-ended Working Group, open to all States.

The US Switches Sides

The initiative was encouraged in 2009 by an astonishing reversal of US policy. When Barack Obama replaced George W. Bush in the White House, the US began actively promoting a resolution in the UN General Assembly to “elaborate a legally binding instrument on the highest possible common international standards for the transfer of conventional arms.” The US was on board!

When at the General Assembly on 2 April 2013 the ATT was adopted, the vote was 154 in favor, with 3 opposed (North Korea, Iran, and Syria) and with 23 abstentions. Both the United States and Canada supported the treaty.

Next came the opportunity for each nation actually to sign the treaty. This formal phase began on June 3, 2013—over a year ago—and many countries swiftly seized the chance to sign. By now 118 states have signed it and 40 have actually ratified it, enacting it in their own legislation. Ninety days after the fiftieth state ratifies the ATT, it will come into effect as legally binding.

The US has signed the treaty, but Canada has not done so. Why not? Evidently the gun lobby has even greater power in Canada than the NRA wields in the US. Officials in the foreign ministry replied to queries by saying that the treaty might interfere with lawful Canadian sports shooters and hunters. Others worry that the treaty might resurrect the long-gun registry, which the current Canadian government abolished.

Neither concern is warranted. The ATT applies only to the international trade in weapons; it has no bearing on the internal regulation of weapons in the UN’s individual Member States.

In fact, Canada also engages in some international arms sales that would not conform to the ATT. Although Canada’s military products would ordinarily be subject to export regulations, there is one glaring exception when the US is involved. Canadian companies are allowed to sell military hardware to the US without any authorization, even if the US intends to export it to a third country of their choosing. This rule provides a long-standing way of circumventing Canadian controls, and it would presumably violate the new arms trade treaty. It is time to stop such practices.

Not long ago, Canada enjoyed a place of honor in the world, respected for its leadership in promoting peace and human wellbeing. Today Canada needs to repair its damaged reputation, and it can begin by signing the Arms Trade Treaty. Have you told John Baird what he should do?

1 Ernie Regehr, “Canada and the Arms Trade Treaty,” in Behind the Headlines Vol. 64, No. 6, published jointly by Canadian Institute of International Affairs and The Centre for International Governance Innovation. 2007. 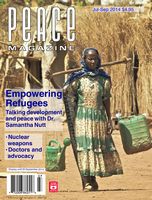