The horrific story of inhumanity currently unfolding in Syria has given rise to a number of grassroots organizations in the Toronto area over the past couple of years, one of which is the Syrian Canadian Foundation for Humanity (SCFH). At the founding meeting in August 2012, I was in the company of a group of Syrian expatriates who were deeply troubled by the worsening conflict and united by a sense of despair. They were in search of a tangible means to relieve the suffering of friends and loved ones back home.

For the most part, the founding members were not activists. Many were professionals, students, entrepreneurs and trades people with little or no inclination to be outspoken until tragedy struck home. Now, with unprecedented violence in Syria, they had no choice but to organize.

The SCFH’s founder, a Syrian man who immigrated to Canada in 1973, had witnessed conflict up close. As a veteran of the Canadian armed forces, Husam Wafaei knows all too well the effects of war, having served in Somalia, Rwanda, Bosnia and a number other countries during some of those nations’ most difficult times. The experience left a marked impression on him, particularly the impact of war on children. Now his country of birth was mired in conflict. He couldn’t simply sit back and watch.

But where does one start when the conflict is so intense, the need so great and the future of the country so opaque? Husam, with the concordance of the membership, decided on a few key principles that laid the foundation for the organization.

First and foremost, the SCFH would be entirely humanitarian in purpose and scope. The wellbeing of those affected by the Syrian conflict, whether it be due to injury, loss of family support system, displacement, or the collapse of the Syrian medical system, would be the SCFH’s only mandate.

The organization’s second tenet was decided to be one of political neutrality. The SCFH has avoided taking sides in the Syrian conflict. The political struggle at the heart of the conflict would be for others to decide. Re-enforcing the concept of neutrality is the doctrine of non-discrimination, a core principle of international humanitarian law. Many members have their own personal sympathies, but they realized that partisan allegiances would only serve to erode the support that the SCFH would render to the Syrian people.

As a logical follow-up to political neutrality, the organization also vowed to be inclusive. There are no barriers to membership and in fact, the SCFH strives to attract members from all backgrounds.

Having established the fundamentals, the SCFH began crafting its vision and mission statements and drafting a constitution and bylaws. Executive committee elections were held and committees were formed. Application for not-for-profit status would follow shortly.

The ideas for projects flowed as anxious SCFH members engaged war-affected families and friends overseas in a series of impromptu needs assessments. The organization was quickly inundated with requests for food, shelter, clothing and medicine. The large number of children left orphaned as a result of the conflict quickly became apparent, as did the number of people suffering from chronic conditions exacerbated by the collapse of the health care system. Perhaps just as tragic was the loss of educational opportunity for the children. Throughout Syria and in neighboring refugee camps we received feedback that there were few options for kids to continue their schooling.

Fundraising would of course be a challenge, but so would finding the means to reach people who are most vulnerable. Violence in Syria has continued to escalate as no secure humanitarian space exists within the country. Supplies are difficult to get across the border and moving about within Syria is perilous.

The SCFH soon found itself in a support role to Médecins Sans Frontières /Doctors Without Borders (MSF), by both generating funding and by providing a liaison to the expat Syrian community in the GTA. A sponsorship program for orphaned children was also established. Currently the SCFH provides financial support to approximately 200 kids. A number of surgeries for critically ill children were also paid for by the organization. But our efforts don’t even scratch the surface.

More than 115,000 people have been killed in Syria’s two-and-a-half-year-old civil war according to the Syrian Observatory for Human Rights, and 2,000,000 others are refugees in neighboring countries by the UNHCR’s count. Almost 5,000 Syrians flee the violence into neighboring countries every day. Another 4,250,000 have been internally displaced since the conflict began—in total, approximately one-third of the population has been uprooted, with almost half in need of assistance. The international agreement to rid Syria of its chemical weapons arsenal has not curtailed the loss of life. “Syria has become the great tragedy of this century—a disgraceful humanitarian calamity with suffering and displacement unparalleled in recent history,” said UN High Commissioner for Refugees António Guterres this past September.

A series of events, including a dinner, a bazaar, and a barbecue, helped to raise money as did direct appeals to the public through the SCFH website and various social media campaigns. Such events are ongoing, although it’s now becoming apparent that donor fatigue is setting in amongst the community and new and inventive ways to inspire generosity are always under discussion.

Sadly, it’s been the SCFH’s experience that the human tragedy in and around Syria has failed to permeate the Canadian consciousness, despite efforts to raise awareness and to motivate people outside of the Syrian and Arab communities to become involved. Given the press coverage and the shocking statistics that capture the headlines, those of us who work toward achieving humanitarian relief find it hard to understand the failure.

In June, the SCFH hosted a discussion panel, “Syria, Humanity’s Call” to examine humanitarian issues in a public forum. The panel included directors from MSF and the Red Cross, a Toronto Star foreign correspondent, a member of parliament and others. Despite an ambitious marketing campaign and a prime University of Toronto location, we were unable to attract more than about 40 people, most of whom were our own members.

The lack of the general public’s connectivity with the human element of this disaster was epitomized for me while I was promoting the event at Dundas Square in downtown Toronto with a number of other SCFH members. I approached one gentleman and asked him if we could discuss the humanitarian catastrophe in Syria. He agreed, but shortly after I began my spiel he interrupted me, wanting to know why things were so bad in Siberia. When I explained that I was talking about Syria and not Siberia, he gave me a blank look and walked away. Needless to say, I didn’t see him at our event.

The nature of the war itself is very complex. The belligerents and their alliances have evolved since the early days of uprising in March of 2011, making it difficult for those without an intimate knowledge of Syria and the region’s powerbrokers to understand the conflict. The SCFH maintains, however, that reluctance to support humanitarian efforts based on shifting political sands does nothing to bring relief to those who are so deeply affected. We must move beyond the political and sectarian interests and focus on means to translate compassion for the victim into concrete ways to end the suffering. There remains an enormous amount of work to be done on advocacy in order to convey the importance of addressing the humanitarian side of this egregious war.

It’s not a case of charity. Non-combatants have rights under international humanitarian law. Those rights have been violated by a number of the parties who have stakes in the conflict, including rights to the provision of medical care, food, and shelter. Medical personnel, supplies, hospitals and ambulances are also protected under IHL. However, they are often targeted in Syria.

Neighboring states need more support in order to better provide for those who have fled across Syria’s borders. Certainly Canada can do more in terms of funding humanitarian efforts, but also by exercising its influence in the international arena. We have yet to sign the Arms Trade Treaty and our diplomatic relations with nations in the region that help fuel the conflict are tenuous or non-existent. Canada could certainly be a better steward for peace and stability than it is currently by exerting soft power to stem the flow of arms, for the sake of Syria and for other nations in which strife and conflict prevail.

In light of the need for change both at home and abroad, the SCFH will continue to seek the support of those who hold humanitarianism in high esteem, for the benefit of all in Syria.

Joseph Davidson is an activist in Toronto. 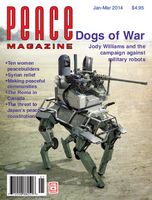 Search for other articles by Joseph Davidson here