Who let the coyote out? In Amerindian lore, the coyote is a trickster who loves to create problems for others. Mostly we should enjoy our problems, for without them life would be boring. The games we play involve obstacles that we set up specifically to try to overcome. We also check the news eagerly to see how our politicians and planners are managing our problems. But lately the trickster coyote has been out having fun, changing problems rapidly and throwing us off our game.

Take Syria, for example.Weeks ago, we expected the US to attack Assad for using chemical weapons. Then, overnight, Kerry hinted at an alternative and the situation reversed. Now Syria and even other countries may destroy their chemical weapons. And Syria’s deputy prime minister told the Guardian’s Jonathan Steele that his country recognizes that the war is at a stalemate and is ready for a ceasefire. So heads are spinning, figuring out a brand new foreign policy.

Or take Burma. We thought we were dealing with a brilliant woman fighting a none-too-smart bunch of dictators. Suddenly our coyote appears, and the Naypyidaw regime partly reforms and frees Aung San Suu Kyi while cracking down on the Muslim Rohingya people. For her part, Daw Suu becomes a politician who cannot afford to alienate her base, so refrains from criticizing the abuse of the Rohingya. Blame the coyote. Whose side are we on nowadays? (Read Kevin Malseed’s piece on page 16.)

Or take Iran. We knew what to make of Mahmoud Ahmadinejad, but suddenly he’s out and the new president, Hassan Rouhani, is a charmer who offers to settle the dispute over Iran’s nuclear program. Obama seems to be nimble in responding, but the coyote has thrown Canada’s foreign minister Baird and even some peace workers offstride. And most Israelis already miss Ahmadinejad. (What will they do if they lose both Syria and Iran as enemies—negotiate with Abbas?)

Or take Vladimir Putin—the man who is easiest for everyone to dislike. He has not pretended to be democratic since he resumed power last year and cracked down ruthlessly on Russian activists and even gay parents, while defending his only remaining client in the Middle East, the Syrian ruler. But after a conference with the coyote, he writes an article in the New York Times sounding more statesmanlike than Barack Obama.

Or even take the Vatican. Everyone on earth knew what the Catholic Church stood for—and against—until the coyote shows up and there’s a shake-up. Now Francis is pontiff, expressing love even for those who are (technically) major sinners, and claiming to be one himself.

So all peaceniks, pundits, and politicians face new and more agreeable problems to address. We got here not by solving the old problems, but apparently by chance. Still, let’s think how to play this hand. 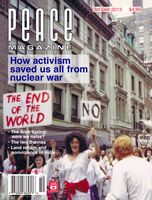