Ruptured pipelines and the resulting pollution to the environment does not receive the attention needed to safeguard the Earth’s diminishing clean water supplies. One-sixth of all human beings do not have access to clean water.

Some pipeline companies apparently would not like the public to know about these spills. For example, in 2011 Suncor had a three-day spill that polluted the Athabasca River. There was no news release warning the affected communities. Just recently the government of Alberta released a report stating that 50 per cent of the rainbow trout that were tested died as a result of that particular spill.

In the last week of this March Suncor had a ten-hour pipeline break that sent 2200 barrels of toxic bitumen sands solution into the Athabasca River. No wonder people, including First Nations communities, are concerned about polluted water.

There have been hundreds of oil spills on our planet. Pipeline owners generally respond by saying that it is under control, there’s no danger to anyone!

In July of 2011 Exxon sustained a break in a small pipeline buried beneath the Yellowstone River in Wisconsin. In a short time 150 miles (240km) of the river was polluted.

Recently, the town of Mayflower, Arkansas was subjected to a serious break in Exxon’s Pegasus pipeline. The news media reported a 12,000 barrel spill of “crude.” But this particular “crude” is a solution of bitumen sands, water, benzine, butane, and other contaminants required to make it flow through the pipeline. Twenty-two homes had to be evacuated. The smell was horrible. Lawns absorbed some of this mess. Some paved streets were covered. However, the excess flowed into the drains, then into Lake Convey, which had been stocked with four species of fish. One has to wonder if the citizens of Mayflower will be reimbursed for the loss of value to their homes and property.

If we humans are able to survive all the damage that we are contributing to our deteriorating planet’s environment, there may be an upside to all these oil spills. There will be a need for many workers to clean up the bitumen spills, and to repair the breaks in those aging pipelines. Let’s hope Canadian taxpayers do not have to pay the workers!

I wish to comment on the Drones article (Peace, Jan-Feb.). There are two aspects of drone capability—for surveillance and as a weapon of destruction. In principle, there is no difference between a drone and a manned aeroplane. There is a difference in technique but in both cases they are systems that involve a human and his equipment. Therefore, they should be treated in the same manner.

Surveillance is covered by rules of espionage that would apply equally to drones and manned surveillance. The rules may be inadequate but they would apply in both cases.

A weapon of destruction when delivered by a state is an act of war and equivalent to a declaration of war and should be recognized as such, regardless of method of delivery. For example, the USA is at war with Pakistan, Yemen, and other drone targets, whether they admit it or not.

Targeted assassinations are not fundamentally different whether conducted by drones or by other means (such as in the Israel/Palestine conflict). Even with a guarantee of precision, it is tantamount to murder. If condoned by the state, it is still murder and should be treated as such. In most cases, there are collateral casualties and therefore it can be defined as a terrorist act.

The drone issue is cause to re-examine the rules of espionage and targeted killings because of the increase in capability but not because the acts by drones are substantially different from other systems of surveillance and weapon delivery.

PS The article on Mali was the best analysis I have ever seen of this difficult situation.

BC Doesn’t Get It

The party that just got reelected in B.C. is friendly with the federal Conservative government in putting economic growth and jobs at the top of their agenda, with the environment at the bottom.

B.C.ers don’t understand. Of what good is resource-extraction and job creation when the planet is deathly contaminated and its populace getting sicker and dying because of mass industrial and vehicular pollution? 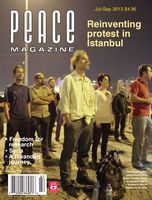