How effective are military forces in disaster relief?

What is the relationship between the peacetime disaster and warfare? Or, to ask a related question, how similar is “disaster risk reduction” to peacebuilding?

Peacetime disasters include such things as earthquakes and fires, which are especially serious in communities with pre-existing social conditions that make them vulnerable. (Haiti is an example.) In such cases, if people have access to established, non-military means, their losses can be prevented or reduced. Yet the military is often mobilized to respond to disasters—whether wisely or not. Sometimes the army’s intervention facilitates the essential work of civilian institutions, but often it undermines it instead.

Disasters are often described in the language of war. They are said to “hit” and “strike.” Like bombing raids, natural catastrophes are said to attack “out of the blue,” and are ascribed to dangerous “agents” or forces “unleashed” by Mother Nature. They are unpredictable and indiscriminate, and the victims are seen as “defenceless,” and their survival as a matter of luck. Emergency actions are likened to military campaigns working to “conquer” nature.

To be sure, disaster victims do indeed experience terror and misery. Except for a few societies with high quality public and private services, the armed forces uniquely have the personnel, equipment, and communications technology available for emergency relief. Their role is so important that military establishments have operating manuals on it. Some military colleges and journals are dedicated to training and preparing for crises.

However, these arrangements are quite recent. Such systems began in wartime civil defence, and the warlike terminology began in war news reportage. Lately, with the rise of homeland security, even greater attention is being devoted to national security and the disasters connected with war.

The rise of so-called “militant humanitarianism” is especially troubling, for it diverts attention and funds away from non-aggressive responses and from the kinds of disaster risks that result from militarization itself.

I cannot say that military deployment is never necessary; it is even exemplary in some cases. Perhaps it is inescapable, given today’s out-of-control military spending and belligerent attitudes, even in liberal democracies. (In countries with repressive governments, disasters create even worse problems: panic and opportunism.)

Yet military deployment is a serious concern for peacebuilding in situations of disaster relief. We need an independent, critical review of the following issues:

In 1951 NATO established its Civil Defence Committee, noting that the ways of protecting populations against the effects of war could also be used to protect them against the effects of disasters. During the 1980s, countries were adding new national emergency response agencies, such as Canada’s EMO, the United States’ FEMA, and counterparts in Europe and the Soviet Union. Nuclear readiness was their first priority. The homeland security model offers a similar civil defence recipe as an analogue to war. But is this a good basis for managing peacetime disasters?

The actual performance of the model in wartime hardly inspires confidence. Propaganda spread images of heroism in civil defence work, yet those defences had failed to protect civilians from attacks on the ground or from the air. The firemen, wardens, and countless civilians surely did heroic work, but it was never adequate. No nation invested anywhere near the required resources.

In reality, civil defence was not primarily about protecting civilians. It was a home front project to control them and ensure that they supported the war effort and put up with wartime sacrifices.

During the 1980s and 1990s, civil defence lost its aura for a time, since it became obvious that no nuclear defence was possible. Disaster specialists began to emphasize alternatives, such as reducing exposure for people who were most at risk, and drawing residents into participating in safety measures. But when the new war-fighting angle of homeland security came along, Peter Amacher observed:

“After a long spell out of the spotlight, civil defence is now back in the news. And one thing about it is clear—just like in the old days, citizens are basically on their own.”

Intimidation and secrecy make it hard to assess the militarization of disaster relief. In poorer countries, national and international armed forces are among the first responders, providing security for government agencies, international organizations, development banks, and major donors. The area resembles a war zone or a crime scene, with top-down disaster management.

But these military activities are not cheap. Often they absorb a large fraction of the assistance; helicopters and fuel cost money and sometimes have accidents. Haiti is one of the few cases where the additional costs are well known. Military leaders dislike spending their own funds for projects unrelated to war, so they welcome the extra budgets allocated for humanitarian relief.

But others do most of the actual work—rescuing, caring for the injured, sheltering, feeding, and evacuating victims. Local survivors and nearby communities, civil institutions, and agencies provide real relief and assistance. Within the military, the most important work is done, not by armed soldiers, but by those with skills in medicine, food services, and other civilian-type jobs. In New Orleans after Hurricane Katrina, as in Haiti now, there is evidence that interventions to provide security are often less than humane—even making matters worse for the most needy.

Human rights abuses, reported in almost every country, are mainly committed by armed forces, militias, and para-military units. Disaster victims are often people from repressed social groups, so that even when the military units maintain exemplary discipline, the victims’ mistrust can impair their relief efforts.

Warfare can also directly cause or compound disasters, as in environmental warfare, scorched earth campaigns, and militarily enforced sanctions. Economic sanctions have created famines and epidemics, and are responsible for millions of deaths. Indirectly, war, states of emergency, military occupations, and armed repression all affect the severity of disasters. Uprooting populations and ruining institutions or infrastructure magnifies any disaster.

Military spending competes with alternative measures for disaster risk reduction. We must not forget that NATO and the Soviet bloc countries maintained their war footing after 1945 or 1991 with increased spending. They armed former colonies and new client states that were ruled by military or civilian dictators. Emergency relief expenditures often reflect the same geostrategic objectives.

Haiti’s ongoing disaster illustrates these points. Violence was an important factor before, during, and after the earthquake. The economy had been devastated for centuries by the violence of outside forces (notably the US, France, and Britain) and by internal dirty wars, repression, and paramilitary gangs. Over $16 billion in disaster assistance has failed to improve the plight of most victims. Structural violence continues as impoverishment and degradation of the poor, while the tiny elite holds most of the country’s wealth and benefits most from the Canadian-trained security forces.

Military involvement is not only motivated unselfishly by a desire to help. Check out the US Overseas Humanitarian, Disaster and Civil Aid (OHDACA), which says that it aims to

“support US military forces… to maintain a robust overseas presence aimed at shaping the international security environment…to respond effectively when called upon to assist the victims of …natural or manmade disasters…[whereby] the US military gains substantial training benefits and obtains access to regions important to US interests…[and] enhances readiness across a number of operational areas including: command, control, communications, and intelligence (C3I); civil affairs; and logistical support.”

About one-fourth of OHDACA’s budget goes to de-mining activities around the world by US forces. The US did not sign the Ottawa Treaty to ban landmines and remains a large manufacturer, stockpiler, and supplier of anti-personnel mines.

However, the military is not alone in seeing disasters as an opportunity. The media particularly gain by exploiting violent imagery and spectacle. Each year there is a “Conference on Disaster Management” in Toronto. This upbeat affair brings together academics; risk and crisis managers in government and the private sector; and sales exhibits. It highlights the security and insurance industries, high tech, and safety solutions in disasters. And in case disasters depress you, the meeting offers “a collection of fun and productive networking opportunities…Gala dinner and ‘Fun at Fallsview, Niagara Falls.’”

There are parallels here with city planners who thanked Hitler for the Blitz—a chance to realize their dreams of properly planned cities. They had counterparts in German and Japanese cities bombed by the Allies. The death tolls and destruction were highest in parts of the cities that resemble today’s urban disasters—London’s densely occupied slum districts in the East End; Hamburg’s Mitte and Hammerbrook; Berlin’s Kreuzberg and Charlottenberg; Tokyo’s Asakusa areas.

Clear parallels can be seen in Kobe’s 1995 earthquake; in New Orleans 2005 and Port-au-Prince now. Only the bombing raids were planned, but both kinds of disasters revealed the ineffectiveness of civil defences.

Haiti and Katrina, like the 2004 Indian Ocean tsunami and smaller disasters such as the water contamination in Walkerton, Ontario in 2000, show that disaster management needs to be reconsidered. In this time of debt and austerity, disaster funding suddenly offers unexpected opportunities. Commercial and development schemes, otherwise not possible for many governments, are added to the wish list. A militarized response facilitates top-down secret plans, with lax oversight.

For real improvement, we need to know how often militarized emergency management solves the wrong problems; misdirects goals; magnifies dangers for those at risk; facilitates the exploitation and pornography of disaster; and diverts resources from more user-friendly ways of confronting environmental dangers.

State-of-the-art engineering solutions are attractive and possibly practical for wealthy communities, but they are not available in poorer, more vulnerable places. Still, safety can be improved in such places by simpler methods that enhance resilience. This requires more and better-paid employment, entitlements, and access to information.

Precautionary and preventive measures need to constrain development projects. Elsewhere, cultures of prevention have reduced accidents, urban fires, disease, and crime. The potential of such strategies is apparent in congested city districts and impoverished rural communities.

The distinguished American geographer and peace activist Gilbert White points the way. His concerns with flood hazards took a conservationist and human ecology approach that urged careful choosing among the range of possible preparations for danger. The prevailing approach had emphasized flood-fighting, dams, and other hugely expensive flood control structures that did not always hold up against recurring floods. White suggested other ways: watershed and flood plain management, land use planning, insurance, and other precautionary or avoidance options—all of them decidedly nonviolent in nature.

At present, however, the war model overshadows White’s approach. Whenever the experts fail, actual assistance today relies on charity, emergency management, and simply leaving victims to cope on their own.

Ultimately, the reduction of disaster will depend on prevention, not cure, and on the uplift and preventive measures applied to communities at risk. The costs will be small compared to current military spending.

Sidebar: The Earthquake Disaster in Haiti 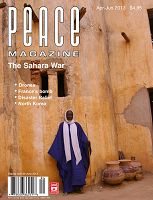 Search for other articles by Kenneth Hewitt here