Working for Peace and Justice: Memoirs of an Activist Intellectual

Larry Wittner is a serious historian whose working-class roots and Russian/Polish Jewish heritage gave him a strong sympathy for those who have been persecuted and exploited. These sympathies may be felt by many academics but Wittner’s history is one of putting his activism and public utterances in front of those who were in a position to harm him professionally.

Over the years I’ve benefited from Wittner’s scholarship and his translation of academese into plainly understandable writing. His latest book, Working for Peace and Justice, is his memoir, a delightful and typically Wittnerian volume in some ways, and an outlier from his oeuvre in others. He is thoroughly professional in his familial research, tracing it all the way back three generations to the persecuted Jewish communities in Poland and Russia, then to his immediate family roots in New York, digging up historical data that grounds his story in a solid societal and cultural fashion. The professional historian’s application to his own family makes this a stronger memoir than most, and the personal voice of the memoir really makes the history vital.

From his early days at Madison, Wisconsin, to his Ph.D. in history from Columbia University at age 26, Wittner’s academic career was increasingly golden, but he had the professionally maladaptive habit of publicly speaking and writing from his conscience about peace and justice issues. This kept him on the move, unable to gain tenure for a long time indeed, and when he was grudgingly awarded what was long overdue it was at a backwater university, the State University of New York, Albany, where he remained until retirement. Had he been about self-aggrandizing careerism, his foreign policy writing would have served US corporate and national interests instead of favoring peace and justice for all. His activities might have served the Rand Corporation instead of local labor unions and anti-apartheid activities, just to name a couple of his unpaid challenger activities.

The book reads like a novel with occasional dryly mordant wit and the rare but interesting account of some of the internal academic struggles that reveal how petty many of us in that world can be. At times Wittner names names, but sometimes uses pseudonyms. He is modest where he should be and frank about his capacities where he needs to be (for example, noting his non-athletic skill set but his intellectual abilities). He lets his commitment, conscience, and heart speak for themselves.

If you are a writer, a teacher, an activist, or aspire to any of these, I recommend this memoir. It is a blunt and revealing look not just at a life of the mind hindered by a life of the conscience, and through these lenses it shows a great deal about our subcultures and dominant culture. 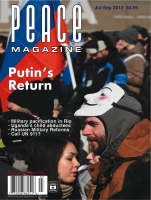 Search for other articles by Tom Hastings here