Immediately after becoming prime minister of Russia in 1999, Vladimir Putin launched an assault on his country’s environmental activities and governmental agencies. Given the bleak history of his now 12-year regime, it is appropriate that an upsurge in environmental activism, focused on Greenbelt and forest protection around Moscow, should be uniting and mobilizing his diverse opponents. Putin removed funding for the protection of forests, which until 2008 had been paid for throughout the Moscow Greenbelt, by the City of Moscow.

One of the new leaders of the opposition is a former engineer, now a wife and the mother of two young children, Yevgenia Chirikova. She has risen to national fame and popularity over her dogged defence since 2007 of a forest. She has worked valiantly to unify the country’s opposition as part of a concerted effort to save the 2,500-acre Khimki Forest from an expressway and associated urban development.

The struggle to save Khimki Forest has united died-in-the-wool Communists with the fervent democrats of the Yabloko Party as a group now called Ecodefence. They have planted trees in the ruined parts of the forest that had been pulverised before community activists were able to stop the bulldozers.

Chirikova organized an opposition unity strategy session called the Anti-Seliger, as an alternative to the pro-Putin forum held annually on Lake Seliger. From June 17 to June 20, 2011, this brought together civil rights and environmental activists from across Russia to develop common strategies. Musical and literary performances, debates, walks, and tree plantings were conducted. Participants were provided with tents, meals, washing facilities, and buses from Moscow. Later, on August 22, in Moscow’s Pushkin Square, 2,000 political activists, united under an anti-corruption banner, met in a four-day festival in an event termed Russia’s “Woodstock.” Although authorities cut off the power to bands, musicians still played without amplification.

The threatened forest is named after the industrial suburban municipality outside of Moscow whose council, backed by Putin, has used a proposed expressway from St. Petersburg to Moscow as a pretext to eradicate greater Moscow’s natural areas. Had he followed the example of Russian history—forest conservation in Russia goes back at least to the days of Peter the Great—Putin could have seen that working with environmentalists might have been a recipe for regime stability.

Ecodefence has proposed 11 alternative routes; one of which would be through the ugly Khimki dump and another along a rail corridor between St. Petersburg and Moscow. Their studies have shown that the complicated turns and expressway cut offs to service shopping centres would make the road heavily congested. After local activists found that the scheme was illegal under the Russian Forest Code because of its status as a protected forest, Putin issued Ruling No. 1642 to authorize the use of the lands for an expressway.

Under Communism, stability in Moscow was facilitated not simply by intimidation, goods rationing, and egalitarianism, but by careful land use planning and forest protection policies that helped make the metropolitan area a tolerable place. The benefits of such greening efforts are evident in Khimki, a town whose employment is based on the polluting defence industry and is marred by a massive dump.

Moscow’s Greenbelt, whose origins go back to a plan developed in 1935 and which remained in effect until the Putin era, was developed as part of a regional plan to expand forests for watershed protection, air quality, and summer cooling. Legally, the Greenbelt is termed the Forest Park Protective Belt (FPPB). Greenpeace Russia estimates that the Putin regime has wiped out a third of the forests of Moscow’s former Greenbelt.

Greenpeace Moscow fears that if such deforestation trends continue, 60 per cent of greater Moscow’s green forests will be paved over. Confirming such fears, after New Years Day, 2012, at least 120 trees were felled illegally in Khimki forest outside of the proposed expressway route. Two immigrant workers from Tajikistan were caught felling the trees on orders from a local businessman. There have been reports in local media that the cutting was related to plans for a trading center and car repair shop in the forest. According to Radio Liberty, the leader of Ecodefence, Yevgenia Chirikova, said the incident was typical of the “uncontrolled deforestation in the region.”

Alexey Yaroshenko, head of Greenpeace Russia’s forest section, has said, “Cutting public lands, and, above all forests, has become in our country the same calamity as cutting the budget money.” An expert committee has documented the problem of encroachment in the FPPB. It found that since 2008 around 300 hectares of the FPPB have been lost to illegal development and much more to forest fires and long-term (49-year) leases. This has meant the loss of 110,000 hectares of metropolitan forested parkland around Moscow.

In 2007 Chirikova, who had previously no political involvement, discovered signs proving that swaths of the Khimki Forest were to be removed for an expressway. Her campaign quickly raised the interest of journalists who were surprised that the proposal had not been discussed in public fora until signs appeared along with surveying crews. The response of the Putin regime to the media interest was horrific repression.

The first victim of the regime’s repression was a local journalist, Mikhail Beketov, whose paper is the Khimki Truth. He was warned by local officials to stop his coverage. Next his car was set on fire and his dog killed. On November 13, 2008 Beketov was severely beaten outside his home. As a result, he suffered brain damage, lost his right leg and four fingers. Eight surgeries later, Beketov now uses a wheelchair.

After the assault on Beketov, who was unknown outside of Khimki, a more prominent Russian journalist, Oleg Kashin, became the victim of beatings arising from his coverage of the Khimki forest struggle. Although Kashin had earlier been beaten for covering the Chechen War, the assaults on him were far more severe for his coverage of deforestation. On November 6, 2010 he was assaulted near his home. He was hospitalized with several fractures and is permanently disabled.

Intense persecution has befallen Ecodefence and their political supporters. Chirikova was investigated for alleged child abuse and was threatened with the loss of custody of her two children. This harassment stopped only after all her neighbors denied the allegations. Masked thugs, some wearing SS insignia, have beaten and provoked forest defenders. Oleg Melnikov received a broken jaw. Brain injuries were inflicted on Aleyey Rassolv, Pavel Shekhtmam, Sergei Ageyev, Vladimir Morozov, and Daniel Belinsov. Suren Gazaryan was beaten in a police station after attempting to protect a tree from being cut down by hugging it.

Political figures have been arrested in defence of the forest, most notably Sergey Mitrokhin, the leader of the Yabloko Party. Another arrested political figure, Udaltsov, had his rib broken on the May 8, 2010 police crackdown in the forest where the police detained Mitrohkhin and local activist Oleg Pudnikov was beaten so badly as to require hospital treatment.

While opposition protests surged in December 2011 in response to widespread election fraud, Ecodefence, in one of the most appropriate variations of the Occupy movement, established a camp in the threatened forest to resist tree clearance. They set up tepees of native American design and decorated trees with Christmas ornaments.

Despite the upsurge in street protests in response to the allegations of election fraud, the Putin regime has increased the repression against the movement to protect forests in the Moscow region. On December 26, 2011, Udaltsov was found guilty of resisting police and sentenced to prison for ten days. Another forest defender, Yaroslav Niktenko, was given the same prison sentence for participating in an unsanctioned rally. The arrests, however, are contributing to cracks among the powerful elite of Putin supporters, being condemned by Margarita Simonyan, the head of the state-owned Russia Today television network.

The Putin regime is being hit hard on the issue of deforestation and urban sprawl. Both the Communists and the liberal democrats who are uniting with increasing effectiveness have ideals. The protection of forests is now their common cause. And Chirokova says,

“Sometimes I read the Gulag Archipelago when I am feeling particularly down. I read and think how easy we have it. I really admire Solzhenitsyn … He had already tried to change the regime and he sat in prison. He was sick. He was weak and sometimes wasn’t able to write. And despite this, he wrote a book that crossed the world. He found the strength in himself to do it. Today we have the opportunity to be politically active. And in comparison with Solzhenitsyn we are free. We have the internet, cell phones—we are happy-go-lucky.”

John Bacher is a St. Catharine’s writer and environmentalist. 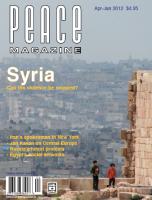