The bombing of Libya by NATO, which includes Canadian bombers, is confusing. Why was this destructive mission carried out? We have been told it had to be done for humanitarian and compassionate reasons. And so, after a hundred days of bombing I wondered: Are the humanitarian bombs used to eradicate Gadhafi and the compassionate bombs used to help the rebels? And how do you find out which groups are civilians or rebels?

The Western industrialized world, particularly global oil corporations, view Muammar al Gadhafi as a pariah. Gadhafi incurred the wrath of oil tycoons when he nationalized Libya’s high quality oil reserves in 1995. To add insult to injury, he then sold that oil in Europe for euros instead of dollars. China is purchasing 17 percent of its imported oil from Libya. Is that good or bad?

Africa is a resource-rich continent. Reportedly, Gadhafi was trying to establish the use of a gold dinar for all the countries in Africa. This would hamper the endeavors of the US to be the world’s greatest permanent military power in the Middle East. The rebel force in Libya is sponsored by the National Front for the Salvation of Libya, which has the support of the US and Saudi Arabia.

Our present federal government is aligning itself to the American war machine, From 1890 to 2000 the US has led military actions in at least 60 foreign countries—not counting their recent wars in Iraq, Afghanistan, the sending of drones into Pakistan, and now the bombing of Libya. It also does not include offshore shows of naval strength nor the permanent stationing of American armed forces in foreign lands.

Recently Kenneth Whyte, author and journalist, interviewed Mr. Harper. He noted that Harper did not view Canada as “a nation of peacekeepers,” but rather as “courageous warriors.” When asked about the nature of the present threat to Canada, Harper replied, “The most obvious is terrorism, Islamic extremist terrorism.” And then added, “and the ability of our most important allies, and most importantly the United States, to single-handedly shape outcomes and protect our interests, has been diminishing, and so I’m saying we have to be prepared to contribute more, and that is what this government is doing.”

Should Canadian mothers prepare their sons and daughters to contribute to the American global military ventures in the Middle East? No country or power can createpeace on this planet by making war. Polls have repeatedly shown that Canadians want to be seen by the rest of the world as peacemakers and peacekeepers. We want to keep a democratic, sovereign Canada free of armed violence and war.

I was delighted to receive the July-Sept 2011 issue of Peace Magazine. We do not have here in the UK anything in peace movement print as wide ranging and useful.

Having said that, I’d like to comment on the interesting article on Robert Oppenheimer by Mark Leith, which casts much light on 1945 history. It is a pity there was no space in it to mention Joseph Rotblat, who was, I believe, the only scientist to refuse to continue to work at Los Alamos once it became clear that Nazi Germany was not going to be able to develop a nuclear bomb.The inner Los Alamos circle knew that it was likely to be used on a Japanese city to intimidate the USSR.

Rotblat came home under a cloud of suspicion but went on with practical forms of peace work all his life, which ended in 2005. A Nobel Peace Prize winner in 1995, he spent many years as Secretary of Pugwash, the international group of scientists which he helped to found. Too few scientists and engineers refuse on moral grounds to do the work expected from them. Conscientious objection is not just an option for the military.

It was Rotblat’s inspiration which led to the formation of our Movement for the Abolition of War.

Ed. note: On pages 22-23 of this issue, Mel Watkins looks at some other scientists who conscientiously objected to the Manhattan Project.
Our January-March 2011 issue includes a review essay of The Strangest Dream, a National Film Board documentary about Joseph Rotblat. See http://archive.peacemagazine.org/v27n1p24.htm.

The Palestinians want recognition as a state and admission to the UN. Poor Obama, who formerly proposed such a status, now must backtrack and threaten to veto the proposal in the Security Council, if it comes to a vote. He claims that only negotiations will resolve the conflict between Israel and the Palestinians. But surely achieving statehood would not preclude negotiations. 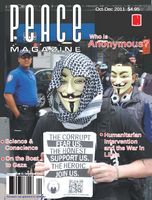