The Russian Quest for Peace and Democracy

The Russian Quest for Peace and Democracy is a statement of faith in the human desire for peace and freedom, a longing that survives even in the most oppressive regimes, publicly in a courageous few, and more covertly in others.

This was true in the Soviet Union even in the darkest days of the Cold War, though there seemed little the few could do about changing the situation. Fortunately there were peace researchers and activists in the West who were eager to share their own insights into the terrible logic of the nuclear arms race. Moreover, the techniques that might be used to defuse the rush to Armageddon were also useful for building democracy, as Spencer sets out. Thanks to these Western peace researchers and activists, and the receptive mind of Gorbachev and others, the worst scenario of the global conflict, nuclear war, was avoided.

Elsewhere in this issue of Peace Magazine, Spencer presents a summary of her thesis and the book’s overall structure. For that reason, I will avoid dealing extensively with the same material, though I cannot avoid some repetition.

Metta Spencer is a sociologist, peace researcher, academic, and activist. She is also a fervent admirer of Mikhail Gorbachev. Much of The Russian Quest for Peace and Democracy deals with Gorbachev’s rise and fall—his efforts not only to end the Cold War but to transform the Soviet Union into a modern democracy respecting human rights. One of these objectives he realized brilliantly; the other eluded him and still eludes the Russian (and most other former Soviet) people now.

Spencer’s affinities, particularly with the international Pugwash movement, gave her insights that she passed on to her contacts in the Eastern bloc. Even in the darkest days of the Cold War, Pugwash members, and others like Jeremy Stone and Norman Cousins, shuttled to and from Moscow to find ways to end the terrible conflict short of a nuclear war.

Through hundreds of interviews, spanning 28 years of Soviet and Russian history, Spencer chronicles the many twists and turns of the process that led to an end of the Cold War. She structures her book around a necessarily simplified but useful sociological analysis of Soviet society, using a central metaphor of animal types—Sheep, Barking Dogs, Termites and Dinosaurs (see page 20, this issue). This metaphor helps us understand how Western visitors were able to find genuinely receptive, and not merely polite, interest in proposals combining disarmament and democracy issues.

She follows this with a review of “peace” thought in the Cold War era, and then traces in considerable detail how the leading edge of that thought, most of which originated in the West, worked its way into the USSR. The Termites, secretly eager for peace and democracy, were the receptive ones. The culmination of that process was realized through Gorbachev, the ultimate Termite—an insider working to transform the system from within. He was, and is, a unique individual who understood the real danger of nuclear war.

What brought an end to the Cold War? Western apologists for our own military, industrial, and political complex assure us that the US (especially under Reagan) and NATO upped the military ante until the Soviet Union cried “uncle.” That is a self-serving idea. The Soviets also had a military/political alliance, which similarly intended to carry on the stalemated conflict—if necessary to the final gasp of civilization. Most political leaders, West and East, were captives of the Cold War psychology. Only a moral and political genius like Gorbachev could break the cycle.

Some of the central concepts behind this transformation were: that we make ourselves more secure by making opponents feel more secure; that it’s unnecessary to kill enemies more than once; that defensive weapons, rather than offensive ones, reduce potentially dangerous tensions; and that one side can take a step towards disarmament unilaterally, thus reducing tensions, and expect a reciprocal response from the opposite side. Gorbachev actually adopted several of these ideas as policy, including the important monitored nuclear test ban that significantly reduced international tensions, though the West was slow to respond in kind.

At Reykjavik in 1986, Presidents Gorbachev and Reagan came to an agreement to remove intermediate-range nuclear missiles from Europe, a significant action to reduce tensions and fear. In fact, at that time Gorbachev actually offered Reagan an agreement to eliminate nuclear weapons on both sides and almost succeeded in gaining agreement. But the “Star Wars” missile defense system was Reagan’s new baby. The moment passed, leaving the problem to grow larger and more complex to be dealt with by future generations. President Obama and others now express hope that it is not too late to start a process which will deal with that issue, but a great opportunity was lost.

Spencer records numerous specific instances of the transfer of ideas and their impact on Gorbachev’s thinking. His subsequent actions led to his freeing of the Warsaw Pact nations from Soviet domination, his striving for a new relationship among the Union’s peoples and the termination of the Cold War.

She then devotes a chapter to the tumultuous ending of the Gorbachev era and the beginning of the Yeltsin/Putin era. To put it rather simply, the Soviet economy was suffering from the costs of the protracted conflict and the neglect of societal needs. Further, the price of oil dropped dramatically, dealing another heavy blow to the Soviet economy. At a G7 meeting in the spring of 1991, Gorbachev asked the Western leaders for loans that would enable him to manage a smooth transition to a free social democratic economy. They refused, preferring to allow the shock of change to sort out the new economy after the collapse of the existing state.

Weakened by the failure of the economy, Gorbachev faced two coups against him, one from the old guard of the Communist Party, and the second by Boris Yeltsin, who led a popular front against that right-wing coup, only to subsequently seize power and sideline Gorbachev. Yeltsin proceeded to dismantle the Union and distributed the nation’s industries into the hands of a very few, who became fabulously rich. He subverted the fledgling democracy with arbitrary action and blatant corruption. In 1993 he even shelled the parliament that refused to support his actions, killing hundreds of people and putting a definitive end to any illusion of the give-and-take required in a democracy. After a fraudulent election, he passed his mantle on to Vladimir Putin before the end of his second term.

In retrospect it is unfortunate that Gorbachev, in trying to balance the forces of the left and the right, and to move slowly and surely toward his vision of justice and democracy, lost the support of the very people who were his natural consistency. Both the secretive Termites and the Barking Dogs, who had always been impatient with the rate of change, threw their support to Yeltsin the demagogue, against Gorbachev, the real reformer. Later Russian history shows the outcome of their foolish action.

That is the core content of the book. Following are a couple of interesting and related chapters that might have been presented as appendices. The first is a thorough investigation, with particular attention to Eastern Europe and Russia, of how societies may move from dictatorships or closed systems into more democratic ones. While change can come from above or from below through revolution, Spencer argues forcefully that it can also come sideways, through the influence of foreign states and individuals. Contacts with foreigners in more democratic states, including people who are not focused on politics, bring new insights to people who want, but are denied, democratic rights. This is achieved by giving them insight into the institutions of civil society that unite and empower people. Active civil societies influence governments and move them toward more democratic institutions.

There follows a chapter dealing with the social traps that make totalitarian regimes possible. I was struck by her reference to an experiment that asked a group of people to decide which of two, obviously different lines, was longer. If most of the group were secretly coached to give the obviously wrong answer, then the last person asked to give his opinion, unaware of the deception, would usually give the wrong answer also. Most of us can often be conned, or coerced, into admiring the Emperor’s new clothes.

This phenomenon also helps explain the sudden fall of the same regimes which appear to have such a grip on their citizens’ fascination. When the internal dissonance reaches a crisis point there can be a sudden collective swing, a popular revolution like those which swept Eastern Europe in Gorbachev’s era and are now sweeping the Middle East.

This is a formidable book. The very detail in interviews and research make the content a primary source for the history of the period. But because of that detail and the subject matter this is not an easy book for non-specialists to read. Though each is introduced clearly, the profusion of Russian names, positions and personalities, political structures, and diverse attitudes, dates and ideas, all of which Spencer learned to handle with such ease, is a challenge for people who come without a substantial prior knowledge of the era. That said, her work honors the tenacity of those who sought peace and democracy, and offers inspiration to those who continue to struggle for a safe, just, and peaceful future.

While the text is fully documented in chapter endnotes and the index is detailed, there is an even more impressive collection of background material at http://www.RussianPeaceAndDemocracy.com. Here you can find hundreds of interview transcripts, audio recordings, numerous background essays, a photo gallery, and much more. This is a must-see if you want a sense of the commitment the author brought to this task. 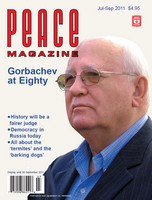