Irwin Abrams, historian and peace educator, died in December in Yellow Springs, Ohio at the age of 96. His long career can be divided into two main stages, the first as a teacher and the second as arguably the world’s leading authority on the history of the Nobel Peace Prize.

His involvement in peace history began with his dissertation (Harvard, 1938) on the European peace societies of the nineteenth century. During research for this project he traveled extensively in Europe, where he met with many pacifists and antiwar activists, among them the young Willi Brandt and several other Germans who had helped to nominate Carl von Ossietzky for the Nobel Peace Prize two years earlier. This was the beginning of his interest in the Nobel laureates, whom he continued to study throughout his career.

As a conscientious objector, Abrams spent much of World War II performing alternative service in the United States, returning to Europe in 1945 to spend two years in relief and reconstruction work with the American Friends Service Committee. In 1947 he accepted a position in the History Department of Antioch College, where he taught for the next three decades. Convinced that the classroom is not the only forum in which learning can take place, he played an active role in creating the college’s very successful Education Abroad program. He was a teacher who asked questions and encouraged students’ curiosity without imposing views of his own, and a mentor whose kindness and generosity was boundless.

In retirement he was able to concentrate his attention on the history of the Peace Prize. His The Nobel Peace Prize and the Laureates was honored as one of the outstanding reference works of 1989 by the American Library Association. A second edition carried the story forward to 2001. He also edited a five-volume edition of the recipients’ speeches of acceptance, as well as two shorter collections—_The Words of Peace_ (consisting of excerpts from those same speeches) and, in 2003, The Iraq War and its Consequences: Thoughts of Nobel Prize Laureates and Eminent Scholars. From the 1980s onwards he became a regular guest at the Nobel ceremonies. In his numerous essays he commented not just on the accomplishments of the successful recipients, but also on other deserving nominees whose achievements had to be weighed. To the end of his life he retained faith in the power of words and ideas to overcome the bloody and violent legacy of the past. 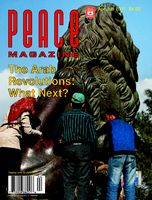 Search for other articles by Robert Johnson here