There have been arguments about the “diversity of tactics” in social struggle since the Quebec Summit of 2001. It is a euphemism for being open to violent tactics.

By favoring autonomy and “freedom of political expression” it can lead to targeted attacks, provocation, and even direct violence against those symbolizing authority. Violent social action becomes “legitimate defence of the oppressed” against the system. One has the impression of listening to a tape of the American Rifle Association about the right to bear arms against the state. In Canada the political right opposes the arms registry. We are on a slippery path.

To be sure, in struggles for change, we envision a variety of means of action. But for an elite of the anarcho-revolt, “diversity of tactics” accepts violence, hindering the credibility of social struggle and justifying repression.

Militant action groups need to maintain links with the oppressed. Our actions must always favor the mobilization of victims and permit the greatest number possible to participate. Action starts with the masses. Consider some examples.

In the fight against the expulsion of tenants for a condominium development the strategies must give tenants a chance to resist and develop popular support for their resistance. Direct confrontation will lead to repression, a loss of sympathy, and demobilization. This weakens the case of poor tenants especially. Violence can become counter-productive and lead to evictions.

Or take the struggle against low-level military flights over Labrador/Quebec (Nitassinan). The Innu opposed the expansion of the NATO airbase where pilots trained to avoid radar detection. The aboriginals mobilized and received the support of peace organizations. They permanently lived on the land where the low-level flights were simulated and despite arrests and repression, occupied the runways where take-offs and landings took place. Solidarity campaigns multiplied when the Innu conducted civil disobedience. But what if there had been acts of sabotage? It would have been difficult to mobilize the victims. Women, the elders, and children would not have participated.

Take the case of actions to oppose military recruitment in Quebec schools. The essential message of the campaign was: Schools must not become places where young people are led to situations where they “must kill or be killed.” The least slip could be used against the campaign. The huge military propaganda machine could go against any violent action on our part. For this reason we condemn the attack against the Recruitment Center of the Canadian Forces in Trois-Rivières. It did not contribute to the mobilization campaign and had no weight in the organized criticisms of the cadet movement (from 9 years of age) and the images of children handling guns in cadet camps. Life-threatening tactics do not respect the ability of the people to assimilate information and stimulate indignation through public education. Nonviolent action is much more effective.

Naturally, I expect a reaction from those who claim that “it is not the means that count but the end result.” In the Oka crisis what if the Warriors hadn’t been there? In Akwesasne traditionalists were shot at by the Warriors in March 1990 when they set up nonviolent barricades against the casinos. In the presence of peace groups, Mathew Pike received a bullet in the back and died. The Warriors’ reputation increased in the Mohawk community while the Québec government furnished them a cause on a silver platter—a confrontation over the expansion of a golf course on traditional burial grounds. The Warriors had no business in Kanesatake but took the opportunity to “regain favor in the Mohawk community” by playing the hero—the arm of an oppressed nation.

How can we prevent such a shameful situation? In real actions, when people are struggling in oppressive situations, the “diversity of tactics” logic fails. This is obvious in mass demonstrations when the “toughs” of the revolutionary struggle and vandals who want to destroy things put on a show, and then hide in the crowds when the police crackdown begins. How can passing on responsibility for pillaging and destroying property contribute to the social cause? Ask the agents provocateurs in the police forces!

The large demonstration, instead of inspiring social groups in their fight, promotes the ideology of a minority that imposes itself on an organized majority. The values of liberty evaporate.

Since 2001 the “diversity of tactics” notion has dominated, holding back radical social action, especially in Québec. The time has come to stop it! 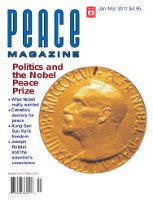