A viewer who, along with most of the public, favors nuclear weapons abolition can view with interest the history of nuclear weapons, and the dangers posed by their continued active existence to this day. The possibility of nuclear terrorism is well presented, even showing interviews with those in the former Soviet Union who would sell fissile materials for personal gain.The movie dwells on challenges to the non-proliferation regime via rogue states—Iran, and North Korea—but spends no time on the obligations to disarm, as undertaken by the Nuclear Weapons States in signing the Nuclear Non-Proliferation Treaty. One strength is its interviews with an extensive list of international statesmen, each of whom makes a case for abolition. Today’s urgent danger of nuclear weapons is exposed convincingly. We hear about relevant problems such as hair-trigger alert and accidental launch.

There is a serious omission in neglecting to say that a small-scale nuclear exchange (tens of weapons) could eliminate life on earth by inducing climate change.The still-retained “first-use” policy of both US and Russia cast doubt on their sincerity in reducing the role of their nuclear weapons in national policy, yet the film does not mention this.

Little of the time is devoted to how to effect change. We do receive the information that past citizen-led movements have brought about positive action on arms control.

The suggestion that viewers should join a peace group has merit, but then what actions should that peace group undertake? Direct approaches to political decision makers are not proposed but should clearly be part of a strategy to generate political will. This movie is a sequel to An Inconvenient Truth, which brought the global climate change story to a wide audience. This film is directed mainly at a US audience and it is uncertainwhether it will resonate with worldwide audiences. It will not have the same effect as its predecessor. There is no equivalent promotion of the film. In Canada little publicity has been given.

Yet it successfully delivers an important message, and though it is not perfect, it needs promotion. So, if you have seen the film, your first action could be to help it get an audience. 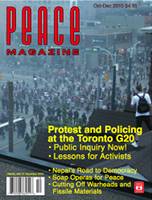 Search for other articles by Adele Buckley (reviewer) here