Why We Are in Afghanistan ...

Anyone confused or concerned about the ongoing dilemma of Canada’s involvement in the war in Afghanistan would do well to look through this collection of essays, as we approach the final stages of this complex mission. The contributors—most, familiar to many Canadian readers, others not so, but equally deserving of our attention. Their arguments against our continued participation—at least militarily—transcends ideology or philosophical reasoning. In fact the range of perspectives include those of a historian, radio producer, teacher, politician, an MSF (Doctors Without Borders) staffer, two citizen-based collectives, journalist/author, a faculty member from the Royal Military College, a retired petro-chemical engineer, a policy analyst, a representative from a Human Rights watchdog, a peace activist, and an academic.

In contrast, Greg Mortensen’s account of his patient struggle to establish schools for girls in the remotest corners of Afghanistan, compels one to marvel at how impossible odds can be tackled, as he has, through the generosity of ordinary people and a core of unworldly locals with a vision and determination that would put most politicians to shame.

If parliamentarians in Ottawa had to debate the pros and cons of the war before we pull our troops next year as scheduled, readers of this collection of essays would be well equipped to question their MP’s views or challenge anyone still contemplating strategic solutions beyond 2011.

While President Obama considers his field-commanders’ needs for more troops and supplies for Afghanistan now, he continues to plan for an exit strategy. What further evidence do we need to be convinced that a military solution is unachievable? As in all wars, it is the civilian who bears the inescapable brunt of destruction, death, and economic devastation. So how can one expect locals to see foreigners as liberators?

The issues covered range from the protection of women, education, tribalism, corruption, the Taliban/ Al Qaeda, Pakistan’s role in the war, the treatment of prisoners and a subject rarely mentioned: the planned oil pipelines that someday might carry Central Asian (and perhaps Iranian) crude oil and gas across Afghanistan to Pakistan and India.

If Kowaluk and Staples make the case for a military withdrawal, Mortenson’s Stones into Schools offers an equally strong case to stand by those in Afghanistan who believe in the importance of schools for their chidren: not just in urban centres but especially in rural areas, often cutoff from the outside world by inhospitable terrain, brutal winters, and impassable roads.

How the author got involved in this project is familiar to those who read his best-selling Three Cups of Tea. It not only caught the attention of some top-ranking US military and government officials, but is required reading for all officers taking counterinsurgency courses at the Pentagon! It clearly shows that harnessing the support of village elders and impoverished folk—who were themselves deprived of basic education—is perhaps more effective, in the long run, than combating guerrilla forces and propping up corrupt warlords, bureaucrats, and politicians.

Despite impossible odds, Mortenson and his team of inspired locals and mentors have begun to turn a daring experiment into reality. Their courage and determination, backed up by the generosity of donors young and old, from all over the world, have helped to keep this astonishing project going. When the book went to press (December 2009), the Central Asia Institute had established 131 schools—currently serving over 58,000 students, mostly girls—in Afghanistan and Pakistan. 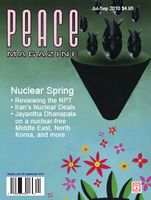 Search for other articles by Subir#32;Guin here