The Population Issue: A Lament for the Enlightened Mind

It has been two hundred years since the Rev. Thomas R. Malthus wrote his essay on population, in which he argued that exponential population growth would outstrip global capacity to produce food. He foresaw an inevitable result: struggle, famine, disease, and war. His analysis was in sharp contrast to that of his compatriot William Godwin, who argued that a more egalitarian society and economics would end poverty and hold famine, disease, and war at bay.

Today, with six times the population, our concerns go beyond Malthus’s concern over our capacity to feed ourselves — yet the same debate is going on. Our worries involve (a) the carrying capacity of the globe, in terms of sustaining life (food, land, water, air), (b) our impact on that carrying capacity by creating climate change and environmental degradation, and © the capacity of human society (the collective human mind) to address these problems intelligently.

There is growing evidence that human population is stressing the capacity of the environment to sustain that same human population. The core issue is not about the capacity to produce food. Humans have been resourceful with respect to food production, but not with regard to ending poverty, famine, disease, or war. Godwin’s recommendations, which are part of the solution, have mostly been ignored.

The “Gaia” perspective sees the planet as a living organism, constantly adjusting to maintain the precarious equilibrium of its various natural systems, such as the climate and biological ecosystems. From this perspective current human activity threatens sustainable human life on the planet. The risks are great and time is not on our side.

But dealing with the population issue is much like playing “whack-a-mole”, a carnival game where a mechanical mole pops up randomly through different “mole holes” in a tabletop. The challenge is to whack the mole with a mallet before it disappears. But when it comes to population, there is no agreement as to whether it should be whacked, and if so, how to whack it.

Population growth has always exerted pressure on the status quo. The growth expands extensively by migration and intensively by urbanization, insofar as it can be sustained by technological advances in agriculture, energy, and transportation. But all these technologies have the potential for creating unforeseen adverse effects.

Today the population debate deals with climate change and increasing scarcities of resources. We are required to confront both Godwin and Malthus again, but with a new sense of urgency.

Some, however, disbelieve the urgency of the environmental issue. They may see population as a problem, but frame it in xenophobic terms, with alarm about population growth “over there” and hordes of migrants coming “over here.” On the other side are environmental alarmists who push for draconian social engineering solutions with scant regard to what is known about population dynamics. They include proponents of Chinese-style (that is, one child per couple) population control policies, who ignore what has been learned from that experiment in social engineering.

There are major uncertainties facing us. First, what are the threats to the planet’s basic equilibrium as a system? Second, how robust is its homeostasis? Third, how adaptable are human systems when facing danger?

Failure to address these questions may push the planet’s homeostasis beyond some unfortunate tipping point so that it will survive while humans do not.

Malthus and Godwin both came out of an Enlightenment mindset, but their assumptions differed considerably. Malthus started from a notion of laws of motion driving population and agricultural growth. Godwin started with the potential of the enlightened mind. It is from that “enlightened mind” that we have come to embrace notions of human rights and human dignity — notions that are at odds with the current conditions of poverty, famine, pestilence and war.

In Malthus’s time the global population was around one billion people. Today, it is around 6.5 billion and projected to hit between 8 and 10 billion by 2050. Advances in agriculture have expanded food production sufficiently to provide food for all. Yet many reside in zones of pestilence and conflict, resulting mainly from poverty and fights over scarce resources. Such conflicts are increasingly exacerbated by climate factors. The number facing hunger and privation today equals the inhabitants of the planet in Malthus’s time.

Recall that for a century and a half, population growth was primarily a process of European population multiplication. To ignore why the rates fell so dramatically in the last half century is to miss the lessons of population dynamics. Moreover, a Westerner runs the risk of sounding hypocritical when targeting populations which currently show high birth rates.

The Challenges for the Enlightened Collective Mind

The population debate has a tendency to polarize opinion between extremes, and result in “tit-for-tat” rounds of futile negotiations over policy choices. The key reason for this is the Gaia-like nature of social systems. A change in one element disturbs the equilibrium elsewhere, with differential impacts on groups. This may generate resistance to intervention.

The good news is that reduced population growth is achievable through the pursuit of objectives such as the UN Millennium Development Goals. The sad news is that society lacks the enlightened collective mind and consensus necessary to pursue those desirable and achievable goals. While lacking an enlightened collective mind to confront famine and poverty-related pestilence, society deploys its resources to carry out war.

The current challenge goes beyond Malthus’s concerns. It now involves building a societal system of equilibrium capable of supporting human existence. The challenge is not whether there is enough food, but whether we will avoid “spoiling our nest” with effects of production and consumption that threaten our very existence.

The past half-century of human history gives us hope. Without design, a desirable demographic shift took place with improvements in standards of living and human rights. Still, cause for concern remains about the enlightened mind.

Societies still find it difficult to build sufficient consensus to face the challenges confronting human survival. Gaia is not purposeful. It is up to humans to use wisdom and a collective enlightened mind, for human survival.

Sam Lanfranco is a professor emeritus at York University. 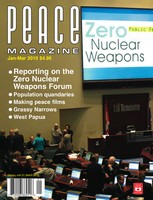 Search for other articles by Sam Lanfranco here