"I lost my virginity. I don't know whether I have AIDS. And who's going to marry me."
--The thoughts of a 19-year-old woman raped by four soldiers from the Congolese army in the Democratic Republic of the Congo

When females are sexually brutalized by military personnel these attacks are often crimes of opportunity. That is, soldiers will rape young girls and women if and when they find their victims by chance.

A combat veteran told Mark Baker, author of Nam: The Vietnam War in the Words of the Men and Women Who Fought There: "You take a group of men and put them in a place where there are no round-eyed women. They are in an all-male environment. Those women are of another culture, another color, another society. You don't want a prostitute. You've got an M-16. What do you need to pay for a lady for? You go down to the village and you take what you want." According to Amnesty International (AI): "US soldiers in Vietnam reportedly gained the status of `double veteran' by first forcing themselves sexually on a woman, either singly or with `buddies' in gang rapes, and then murdering the victim."

The number of opportunistic rapes on the part of U.S. servicemen in Iraq and Afghanistan appear to be relatively low. Former U.S. Army Pfc. Dale Green was recently convicted and sentenced to life in prison for raping and killing a 14-year-old Iraqi girl, then murdering her family. Three other soldiers involved in the brutal attack also received prison sentences.

Rape as a Military Strategy

As opposed to rapes of opportunity, the rape and impregnation of females may be part of a deliberate military strategy. AI states that "Rape, when used as a weapon of war, is systematically employed for a variety of purposes including intimidation, humiliation, political terror, extracting information, rewarding soldiers, and `ethnic cleansing.'"

In general, sexual violence against women -- especially in developing countries -- is based in large measure on traditional patriarchal values that define females as property. This form of violence can be used to attack a society's honor. AI notes that females are targeted during wartime not only as sexual objects but "as presumed emblems of national and ethnic identity, and as female members of ethnic, racial, religious, or national groups."

According to Melanne Verveer, the US State Department's ambassador-at-large for global women's issues, rape as a weapon of war "destroys the fabric of society from within and does so more effectively than do guns or bombs."

Rape victims are often mutilated during the attack. This physical stigmatization is "a lifelong badge of shame," a scarlet letter rape victims will carry for the rest of their lives. Physically stigmatized married females in the Democratic Republic of the Congo are cast aside by their husbands; single women are unlikely to find a mate.

In some conflicts females of any age will be raped, while in other wars young girls are the preferred targets. They are often raped repeatedly and kept as "wives" by their captors, sometimes for years.

According to anthropologist Maria B. Olujic, "Rape was a weapon of terror as the German Hun marched through Belgium in World War I...It was a weapon of revenge as the Red Army marched to Berlin in World War II, it was used when the Japanese raped Chinese women in the city of Nanking, when the Pakistani Army battled Bangladesh..."

The World Health Organization calls sexual violence the cause of more death or disability for girls and women aged 15 to 44 than cancer, malaria, traffic injuries, and general warfare combined. Major-General Patrick Cammaert, former commander of UN peacekeeping forces in the Eastern DRC, notes that "It has probably become more dangerous to be a woman than a soldier in armed conflict."

A Time of Horror

In Bosnia-Herzegovina in the early 1990s, Serbian troops engaged in a campaign of ethnic cleansing, a euphemism for genocide. This campaign included the rape, impregnation, torture, and murder of Muslim and Croatian women with the intention of eliminating these religious and ethnic groups. Rapes were often filmed by Serbian soldiers making pornographic movies. A woman who survived a rape/execution camp said, "We even had to sing Serbian songs in front of the camera."

In the Rwanda genocide of 1994 that claimed the lives of 800,000 in just over four months, the United Nations estimates that between 250,000 and 500,000 rapes were committed. AI states that "Some were killed or seriously injured by having arrows, spears, or other objects pushed into their vaginas or by being shot in the genitals." Many of the women who survived the rapes were later executed.

A Canadian social worker stated that "sexual violence in Congo reaches a level never reached anywhere else. It is even worse than in Rwanda during the genocide."

Rape is a tragic component of the humanitarian crisis in Darfur with victims brutalized by the government-backed Janjawid militia. AI reports clear cases of "sexual slavery" in Darfur where the arms and legs of girls as young as eight years old are broken to prevent them from escaping.

If a Darfurian woman reporting a rape cannot convince authorities that she is telling the truth, she risks prosecution as an adulteress. A United Nations investigation concluded that: "A major obstacle to establishing accountability for sexual violence is the insensitive and often intimidating treatment of sexual violence by authorities."

New York Times columnist Nicholas Kristof reports that during Liberia's civil war (1989-2003), "One major survey found that 75 percent of women had been raped - mostly gang raped..." The victimization has continued in the post-war era. Doctors Without Borders discovered that of the 275 sexual violence cases reported between January and April of this year, 28 percent involved children under five year of age, and 33 percent of the victims were children between five and 12-years-old.

AI notes that the consequences of sexual violence experienced by females include "serious and chronic medical problems, psychological damage, life threatening diseases such as HIV/AIDS, forced pregnancy, infertility, and stigmatization and/or rejection by family members and communities." Few victims of sexual violence have access to health care in their time of need.

In Rwanda, a 2000 study of 1125 rape survivors found that 66.7 percent were HIV positive. Mothers often have little affection for children that were the products of war related rapes. Speaking of her son, conceived as a result of rape, a woman in Rwanda stated: "I never loved this child. Whenever I remember what his father did to me, I used to feel the only revenge would be to kill his son. But I did not." What chance for a fulfilling life does an unloved child in a war-torn, impoverished Third World country have?

In Darfur a woman who has been raped is ruined; in some cases she is thrown out of her home by her family and forced to survive on her own.

What Can Be Done?

The majority of soldiers and military organizations responsible for sexual violence are never punished, although prohibitions against such behavior have existed for centuries. For example, King Richard II's Ordinances of War (issued in 1385) prohibited the rape of females by his soldiers, stipulating that offenders would be put to death.

More recently, Article 27 of the Fourth Geneva Convention states that "women shall be especially protected against any attack on their honor, in particular against rape, enforced prostitution, or any form of indecent assault."

Unfortunately, soldiers continue to rape girls and women with impunity. According to AI, the principal reasons for this impunity include:

Jessica Neurwith, president of Equality Now, a women's human rights group, argues that crimes of sexual violence are still not effectively prosecuted. For example, in the Congo, of approximately 14,000 rape cases registered in provincial health centers between 2005 and 2007, only 287 were taken to trial.

Yet there is hope. Earlier this year the International Criminal Court issued an arrest warrant for Omar Al Bashir. The Sudanese president is accused of ordering attacks against the civilian population of Darfur, including the rape of girls and women. Perhaps this action against a head of state will be a major step in the future prosecution of these crimes. The trial of Al Bashir would heighten awareness of war-related sexual violence: "a shame on the human race."

George Bryjak is a professor of sociology at the University of San Diego. 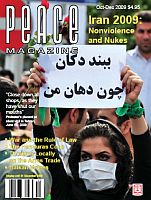