The March 2009 issue of Scientific American has an interesting article on nuclear testing. Underground tests of nuclear bombs can now be distinguished with near certainly and distinguished clearly from earthquakes and mine collapses. This is a good time to persuade countries to sign and ratify the Comprehensive Test Ban Treaty (CTBT), which aims to ban underground nuclear tests.

As of the start of 2009, most UN member-states nave signed and ratified the CTBT but the treaty can't go into effect until all the 44 states with nuclear capability both sign and ratify it. Thirty-five of the 44 have already done so, but nine remain.

Russia and most NATO members have ratified. The nine that have not are the United States, China, Iran, Israel, Egypt, and Indonesia (these have signed but not ratified); three others have neither signed nor ratified (India, Pakistan and North Korea). If the world peace movement could put some pressure on the United States under Obama to ratify (Clinton had signed, but Bush would never ratify), perhaps Israel and China might ratify too. Secretary of State Hillary Clinton made some friendly noises when she was in China.

The motives of Egypt and Indonesia are unknown. The three non-signers probably would not. There is a chance anyhow, so I urge the world and Canadian peace movement to urge Obama and the US Senate to ratify. There is now a chance.

I'd like to draw readers' attention to an organization that formed across Canada in the past year. "Canadians for Justice and Peace in the Middle East" provides a voice for Jewish people who don't feel represented by the old pro-Zionist, pro-Israel lobby groups.

It isn't only Jewish, of course. They welcome everyone who has an interest in, and I daresay, love for Israel and who discuss peace, justice, and respect for international law.

They have an excellent, informative website at www. cjpme.ca, which describes their activities (mainly in Toronto, Montreal, and the West) and outlines their points of view.

Over the past year they brought speakers to Toronto, Ottawa, and elsewhere. These have included John Duggard, UN Special Rapporteur for OPT and Gaza, and Jeff Halper of the Israeli Committee Against House Demolitions. At that time we were also addressed by Susan Nathan, author of The Other Side of Israel: My Journey Across the Jewish/ Arab Divide, and byProfessor John Meirsheimer of the University of Chicago under other, related umbrellas.

These speakers seemed to me to have great knowledge and insight into the situation in Israel /OPT and to speak with integrity and respect for all parties. CJPME plan to make their presence known as they search for justice in the Middle East.

Thanks for Mary Kaldor's article about the changes in military thinking in the Pentagon, led by General Petraeus. This is not just a breakthrough. It's a total reversal of policy about the proper conduct of war. You stop killing civilians and start protecting them.

Now that Petraeus is in charge of both wars, we can expect to see the same "new thinking" applied in Afghanistan, which we can only hope will help. No doubt that is why we are hearing a lot of talk about negotiating with the Taliban -- or at least with the more moderate Taliban.

Still, these plans do not appear to be totally coherent. For one thing, there's the element of the surge. Those new military units are not trained to be peacemakers, and Obama is going to send 17,000 more just for starters.

General McKiernan was on TV the other day. The interviewer asked him whether these soldiers will incur heavier casualties because they are going to be sent out to patrol dangerous areas. He agreed that they probably will get shot at more at first because they will be trying to take regions that are now contested. But he said that in time the risks will diminish. He can probably learn what to expect from the experience of the Canadian troops in risky Kandahar.

Another issue with this "new thinking" concerns the relations between the military and civilian NGO humanitarian workers. Groups such as Doctors Without Borders object when soldiers do relief work one day and shoot at people the next day. That confuses people about the humanitarians, whom they start shooting. 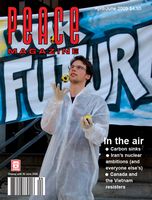