Some activists in the War Resisters campaign supporting American soldiers seeking refuge in Canada are optimistic that a new opposition-supported resolution in the new Parliament, a revival of the resolution steered through the House by Olivia Chow in the last Parliament, will put enough pressure on the Harper regime to stop the deportations.

Some see the courts as the way forward. They use the analogy of success of the gay movement in getting same-sex marriage via the courts when it was impossible in the legislatures. I think these hopes are mistaken. Some would-be refugees are now in court, others are at their last-gasp appeal. A few of them may find a sympathetic judge but I expect the deportations to continue.

The prime minister was determined to ignore a majority vote in the last Parliament, and to rid Canada of "American deserters." The Canadian public has been seduced over the past decade to prefer a military culture over peacekeeping. This profound shift has been accomplished with no serious national debate. The mass media have become cheerleaders for killing in the battlefield.

Still, if a referendum were held, polls indicate that militarism would be opposed. But the Harper regime and the military do not want the matter discussed and no political party is willing to make peacekeeping a campaign issue. Yet, more Canadians voted against Harper than for him, so an energetic effort to change Canada back to an international peacemaker is still possible.

International peacemaking requires special training -- just as tough and thorough as training to kill. A "blue helmet" needs as much courage as a fighting soldier, but it is the courage to stand calmly and talk quietly.

Some Canadians must begin training for nonviolent civil disobedience. We must provoke a serious public debate about militarism in Canadian culture, which, if left unchecked, will mature into the endemic militarism of American society. In my old age (76) I must leave this task to more energetic war resisters. But please, let us begin this work!

The parliamentary crisis of early December arose because the Harper government's new budget did not include a fiscal stimulus to the ailing economy and was therefore rejected by all the other parties. It is obvious that in this economic recession, the only approach that is widely accepted is the Keynesian one: that a large injection of capital is required from the government. In the US, President-elect Barack Obama is planning massive expenditures to reverse current trends. It is not yet clear what the Canadian approach will be.

The question is, then: What kinds of programs, through increased federal funding, can expeditiously launch public projects that increase employment and generate dispersed benefits?

My answer is: programs that use community organizing and development. When given the opportunity, community groups pursue projects that reflect their interests, their local situation, their most pressing needs. It may be establishing an irrigation canal, road, school, clinic, community centre, or cooperative.

Public investment in locally-driven projects impact local populations and their organizations. Jobs are created and income is generated at the local level. Decision-making skills of individuals, groups, and institutions are improved through collaborative experiences, and risk is shared.

In this approach to the fiscal stimulus, two main areas need to be supported: 1) training relevant government and nongovernment personnel, university students, volunteers, and local citizens, including the retired, in facilitating community planning of development projects; and 2) implementing projects that local people decide are most important to them. When the stimulus is directly applied on behalf of the communities' self-described priorities, it elicits their energy, ideas, and dedication.

(The writer has practiced community development for 18 years, currently in Morocco.)

The UN climate change conference has recently ended in Poznan, Poland -- to the great embarrassment of Canada. Again, as in Bali last year, our country proved to be the most obstructive nation in the talks. Canada also placed next to last in an international comparison of countries' climate change performance. The Harper government still pushes its totally inadequate 3% reduction target. 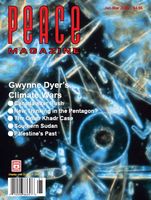