Wendell Willkie in Baghdad: Roads Not Taken in the Middle East

Can we still learn anything useful from the US Republican presidential candidate of 1940? You bet!

Our view is so clouded by recent events that we exaggerate the novelty of today's situations. I want to recall some issues of the 1940s when, in contrast to the present, the United States won global pre-eminence and influenced the world order. We can learn much today from Wendell Willkie, then a political also-ran, whose memoir of his 1942 global tour, One World, sold over 800, 000 copies.

Indiana-born Willkie gained fame as a critic of New Deal regulatory policy. As president of an electric utility, he took on the Tennessee Valley Authority, an example of successful New Deal economic planning. The TVA challenged private corporate control over public resources, a practice which the Republicans were struggling to protect. Grass-roots activists set up Willkie clubs across the country and got their candidate nominated in 1940, though he had recently been a Democrat. Then the Roosevelt machine rolled over him.

Willkie emerged from the election committed to the war as a vehicle of liberation. Roosevelt enlisted him as a bi-partisan ambassador to a world at war. He would carry the American message of liberal democracy to a world threatened by fascism. Willkie's 50-day trip, which carried him from Russia to China to the Middle East, to Africa, to South America, and to the Caribbean, showed him the suffering and anti-colonial longings of millions.

In El Alamein, the site of the stunning British tank victory against the Desert Fox, Willkie immediately noted that, after the war, ideas would have to triumph over military conquest. When his plane, the Gulliver, touched down in Baghdad he began to measure Iraqi society against Western material standards. He found Iraq's urban infrastucture medieval and its education and industry inadequate. The country desperately needed modernization.

But Willkie wasn't content with simply "counting bathtubs." He took note of the anti-colonial nationalism already stirring. Enjoying decadent Arabian nights with British-appointed rulers, he recognized the real powers in the region. He noted that colonialists might have left the olive groves, cotton fields, and oil wells alone, but instead we "have sent our ideas and ideals, and our motion pictures and our radio programs, our engineers and our businessmen, and our pilots and our soldiers into the Middle East; and we cannot now escape the result." The problem was the power imbalance between the poor and the forces of Western rationalization. The Republican business executive and anti-New Deal standard bearer of 1940 wrote:

"...it is very well to say, as some people did say to me in Cairo and Jerusalem, that `the natives don't want anything better than what they have.' That argument has been used everywhere for centuries against the advancement of the underprivileged, by those whose condition makes them satisfied with the status quo."

What troubled the oil-rich region then and continues to plague it now is a tenuous middle-class. In his travels form Cairo to Beirut and Teheran Willkie saw that the "great mass of people" were impoverished and susceptible to the influence of religious authorities. Industrial development, education, public health, and modern industry were necessary, but so too was the "social dignity" that stemmed from political self-rule. More disturbing, a cadre of young intellectuals with "fanatical" visions of national liberation festered just beneath the surface of Western hegemony.

Willkie saw that American ideals could not be imposed from above. Individual liberties, democratic self government, and constitutional law would have to evolve out of the aspirations of people who enjoyed a measure of economic prosperity. Yet he continued to believe that American ideals had something to offer. He understood that Middle Eastern peace depended on Middle Eastern self-government, but self-government and the elimination of Western influence were irreconcilable and ultimately impossible propositions.

Self-government could not arise in a region pummeled by colonialism and lacking of the intellectual architecture of a rights-based tradition. Pragmatist that he was, Willkie sought a middle ground that would steadily diminish British and French involvement in the region while increasing Arabic self-determination. After a day in Baghdad, with the impressive "Shi'ah mosque sprouting gold minarets into the sky," drinking Arab coffee and reading local newspapers with the sounds of people talking and "playing backgammon around us," Willkie could imagine it a cosmopolitan democratic outpost for a world made safe from fascism.

Yet travel once again gave him perspective for critical thought. Flying from Baghdad to Teheran after an evening spent among "Arab dancing girls," Iraqi officers, and American soldiers from Basra, Willkie was troubled by the "sober undercurrents" beneath the frivolity. He detected the same unspoken yet clearly discernible sentiments among soldiers, journalists, and students throughout the region.

"[T]hese newly awakened people will be followers of some extremist leader in this generation if their new hunger for education and opportunity ... is not met .... Again and again I was asked: Does America intend to support a system by which our politics are controlled by foreigners, however politely, our lives dominated by foreigners, however indirectly, because we happen to be strategic points on the military roads and trade routes in the world?"

Willkie would not live long enough to see the United States answer in the affirmative--he died in 1944--but he certainly understood what was at stake. Colonial domination violated the principles for which the United States was fighting the war.

Preaching national liberation and democracy while practicing national self-interest at almost any cost created the conditions for backlash. If colonial alliances and economic unilateralism continued, the Allies would be faced with "a new leader" who would "coalesce these discontents" with "a fierce fanaticism." The result would be "either the complete withdrawal of outside powers with a complete loss of democratic influence or complete military occupation and control of the countries by those outside powers." Willkie rejected American unilateralism in favor of intelligent, multilateral cooperation.

But One World was more than a call for a United Nations; it was a demand for Americans to take seriously Roosevelt's Four Freedoms. It wasn't enough to end Japanese and Nazi aggression. A real war of liberation was required, which would extend to all subject nations and provide the economic assistance to make self-government a reality. Willkie grasped that freedom from political control was meaningless without the economic resources to support independence. He saw that American democratic forms could not be superimposed on Asia and the Middle East. They would have to evolve, slowly. "Most of the people in Asia have never known democracy....But they are determined to work out their own destiny." For Willkie, the United States was at a turning point in its history.

Liberation at home as well

Yet Willkie insisted that a war for international liberation required an equally vigorous movement for liberation at home. The NAACP labor activist A. Phillip Randolph pointed out the contradiction in a nation fighting for freedom abroad while oppressing its minorities at home. Willkie identified the dilemma in 1942, arguing that the racial prejudice leveled against African Americans was the domestic equivalent of imperialism. The war was internationalizing America and exposing it to the scrutiny of other nations.

While Britain and France were rightly censured for colonial subjugation, the United States bore its own scars of racial intolerance, not only in the treatment of blacks but in a "crawling, insidious anti-Semitism" that undermined the moral premises of American belligerence. The corrective, of course, was the kind of unalloyed freedom promised by the Constitution.

Here was a Republican arguing not for freedom of contract or the blessings of an unfettered marketplace, but freedom for minorities threatened by bigotry. The public utilities executive who had once challenged the New Deal for threatening American liberties now championed immigration as a source of "new blood, new experiences, new ideas." Instead of an obstacle to national unity, he considered racial diversity an expression of American moral virtue in a world of totalitarian persecution. Its adversaries could only consider the minority as a threat to national unity.

So Willkie called for a United Nations, international law, and an abandonment of the chauvinistic foreign policies that generated conflict. But so too did Eleanor Roosevelt and most of the liberal establishment. What made Willkie different was his sensitivity to a world weighted down by colonialism. He realized that the United States had more than technical expertise to offer a post-colonial world -- it had a "reservoir of good will." In his 50-day trip he discovered that ostensibly diverse peoples shared common aspirations and ideas. One of these common ideas, which residents of Natal, Brazil shared with a "veiled woman in ancient Baghdad," was an affinity for the United States.

Willkie's observations are stunning, considering the recent loss of American credibility in Iraq. In his time, the good will repository was running high, stocked as it had been by the US war effort. Through Hollywood films, Willkie argued, American benevolence had been advertised to the world. Yet this good will was matched by a sense that the extension of American interests need not lead to political dominance. "I was amazed to discover how keenly the world is aware that we do not seek--anywhere, in any region--to impose our rule upon others or to exact special privileges." Willkie seems to have forgotten the Panama Canal, American interventions in Haiti, Mexico, Colombia, and Nicaragua, American control over the Philippines and Cuba, as well as American cooperation in the punitive settlements of Versailles.

Even so, territorial acquisition was not on the American agenda in the 1940s, nor had it established anything as threatening as Japan's Greater East Asian Co-Prosperity Sphere or as formal as the British Empire.

In this paradoxical moment of global conflagration and global integration, if the United States was not the international innocent that Willkie portrayed, it was also not the type of tyrant that the peoples of Asia and Europe knew all too well.

Do not squander goodwill

Yet Willkie could warn the next generation of Americans that the reservoir of goodwill was susceptible to hypocrisy. Failure to pursue the ideals for which the United States had fought would squander that support. Willkie's trip had made it clear that the war was a struggle over the ideas that would govern a world after the worst tragedies of the twentieth century.

Willkie anticipated several of the conundrums that would face the United States in the post-war world and particularly in the Middle East. He offered some solutions to intractable problems. He illustrated the bi-partisan, transcendent appeal of Rooseveltian liberalism in its best days. He had a unique perspective: close enough to power to understand how it worked, but distant enough to maintain principle. He was able to remind power brokers that principles and democratic compromise are not mutually exclusive.

We can learn today from Willkie's conviction that economic development generally precedes democracy; from his understanding that a strong middle class is necessary to sustain democracy; from his conviction that foreign influence cannot override indigenous self-determination; and from his realization that the failure to abide by the universal claims of the American Creed will undermine American credibility.

Michael Dennis is a professor of history at Acadia University. 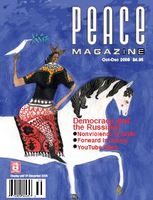 Search for other articles by Michael Dennis here