Where have all the warheads gone?

Thank you for your book review of The Seventh Decade: The New Shape of Nuclear Danger by Jonathan Schell. It reminded me -- and I'm sure others of my generation -- that we are in the seventh decade of nuclear danger and warned us that we are on the front edge of its taking on a new shape and form to hide from us.

As you point out in your review, "nuclear power plants inevitably produce about nine-tenths of the wherewithal for producing nuclear bombs." Thus the potential of nuclear power is for peace or for war, depending on the whim or wisdom of our world leaders. Finances are no longer a deterrent to them as witness the war on terrorism being staged in Iraq.

It is amazing to me that in this new age of a global economy nuclear weapons still lurk in the background of our lives; and that we have continued to find the ways and means of financing the technical expertise and material resources necessary to produce and stockpile increasingly sophisticated nuclear warheads for delivery by increasingly sophisticated missiles. In fact, it was in the late 1980s that then leaders of United States and Russia, Ronald Reagan and Mikhail Gorbachev, wisely called off the cold war because they reckoned that neither the United States nor Russia could afford to commit their citizenry to an seemingly endless nuclear armaments race.

I was just as pleased by way of a follow up to read in your review that there are now only 27,000 warheads in the world's inventory owned by the seven nations in the "nuclear club" -- the U.S.A., Russia, China, France, England, India and Pakistan.

Regardless, I'm left with some questions...perhaps your readership can help me out. I'm left wondering how the 43,000 warheads (more or less) were disposed of? And whether they are potentially dangerous today? I'm also wondering about the 27,000 (more or less) remaining warheads that are held in inventory by the members of "nuclear club".

Isn't that a still bit of overkill? Aren't our leaders doing the numbers? The single bomb dropped on Hiroshima on August 6, 1945, decimated the city, killing 80,000 and injuring more than 27,000. The two hijacked planes flown into the World Trade Center on September 11, 2001 killed over 3,000. Had they been carrying self-detonating atomic bombs that had strayed from the cold war inventory, the damage could have been horrendous.

Do we need that much capability? Besides being potentially dangerous to the point of extinction, isn't it a tremendous waste of our world's technical expertise and material resources to continue to produce atomic bombs and missles? Since Canada is not a member of the seven-nation "nuclear club," maybe it could show its leadership by a concerted effort to build peace instead of joining in on the arms race.

Hopefully, some of the tremendous ingenuity being invested in the development of nuclear power can be redirected towards our civilization's ongoing efforts to build peace rather than win wars. As Einstein once said: "I know not with what weapons World War III will be fought, but World War IV will be fought with sticks and stones."

Even 27,000 nuclear warheads that are light enough and deadly enough to be fitted onto powerful long-range missiles is a lot of potential damage to control. So I am grateful for the awareness that Peace Magazine continues to promote.

Plenty for Us to Examine During US Election Season

The media is deep into the presidential primaries. MSNBC, CNN, FOX, etc report abundantly on demographic trends, strategies, endorsements, mistakes and momentum. As the US moves into the election, one hopes the media will push Republican, Democrat, Libertarian and Green representatives to explain positions on substantive issues.

To take just one example, do the parties feel it necessary that the US has a defence budget of 600 billion dollars -- that is, as much as the next 15 big defence spenders combined? What is their take on defence spending which is 72 times that of Iran or North Korea and is 46% of the world total?

Do they think it wise that America's wars include billions and billions for private contract companies? Why is it necessary to have a defence network of 5,311 sites around the world or US troops in 130 countries? 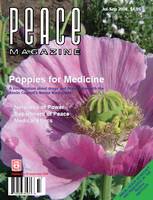