A visit with the Moustache Brothers

The roads leading to the home of The Moustache Brothers in the theatre district of Mandalay are dusty and festooned with potholes. On the side of buildings with corrugated iron roofs, billboards that announce the latest theatre performances lie fading in the sun.

Shopkeepers throw buckets of water in front of their shops in a desperate attempt to keep the dusty earth at bay. It is almost as if this district is a microcosm of the greater state of Burma: despite the poor conditions, the people find a way to deal with the problems.

The conditions the Burmese people live under are a direct result of the repressive government policies of Burma's ruling military junta. Since 1988, Burma has been under the oppressive military rule of the State Peace and Development Council (SPDC; formerly known as SLORC). The regime has become notorious for its egregious human rights record and its Big Brother-like omnipresence.

As a result, the people of Burma continue to live in constant fear and suspicion, under a government that represses the people, rather than representing them.

Human Rights Watch estimates that Burma has more child soldiers than any other country in the world. Driving on Burmese roads, one can see that the government continues to use forced labor throughout the country.

In Mandalay, a comedy troupe known as the Moustache Brothers knows firsthand exactly how repressive the government can be.

In 1996, the year that popular elections were held in Burma, the Moustache Brothers did their part to promote Aung San Suu Kyi's National League for Democracy Party. On January 4th, comedian Par Par Lay and his cousin Lu Zaw performed at the request of Aung San Suu Kyi at her compond in Rangoon. During their routine, Par Par and Lu Zaw joked about the corrupt government and its stinginess toward its own people. Government officials were not amused. Upon return to their homes in Mandalay, the comedians were arrested, along with the organizers of the event.

In March, 1996, they were charged under Section Five of the Emergency Provision Act, being found guilty of "depreciating, perverting, hindering, restraining ... loyalty ... in a way that would induce respect of the government to be diminished ..." For this, both comedians were sentenced to seven years in prison.

Lu Maw, the third member of the troupe who was not there the night his cousin Lu Zaw and brother Par Par were arrested, said that the two comedians spent one week in a jail in Mandalay before being transferred to Kyein Kran Ka, a hard-labor camp 27 miles from Myitkyina in Kachin State. "The only political prisoners," Lu Maw explained, "surrounded by criminals, they were forced to work long hours carrying and breaking stones; their legs shackled by iron bars twenty-four hours a day." With malaria rampant in the prison, bouts of solitary confinement, no medical supplies and few opportunities to bathe, the health of the two comedians deteriorated.

The military junta declared 1996 the "Visit Myanmar Year" and, as a result, many tourists made Burma their summer destination. The influx of tourists helped the comedians' cause. Groups soon found out about the circumstances surrounding Par Par Lay and Lu Zaw's arrest. And, as Lu Maw says, "News spread like wildfire." Amnesty International, as well as other human rights groups took up their cause. Eventually, after spending almost six years in prison, international pressure helped lead to their release in July, 2001.

The troupe can no longer perform publicly, as ordered by the government. However, instead of giving up, the Moustache Brothers have simply adjusted. To circumvent the ban on performing publicly, they simply invite tourists into their home and perform out of their garage. The show includes a comedy routine, traditional dance, and a puppet show. The family also tries to earn a living by selling traditional Burmese masks and puppets.

On September 25, as part of the junta's early crackdown on protesters, Par Par Lay was arrested, blindfolded, and taken from his home to a police station in Mandalay. The authorities suspected him of having some kind of involvement with organizing the monks' protests. According to the comedian, he had simply been an onlooker during the marches in his hometown. Nevertheless, he was transferred to Ohnbo prison, where he was kept more than a month. "Every time I tried to sleep the soldiers would come and call me," he said after his release. The police eventually concluded that their suspicions had proved wrong.

Despite the obstacles they face, the Moustache Brothers remain up-beat."Joking is a means of publicity and a means of helping," Lu Maw explains. "We must share and must joke. People must see," he asserts. One thing is easy to see: the Burmese government continues to be the biggest joke of all. 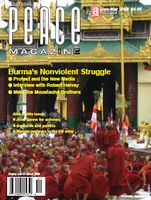