Who Failed the World's "Failed States"?

A growing number of analysts are talking less about the frequency of "violent conflict," and more about "global civil war." They say we are so interconnected, the economic and cultural relations throughout the world are so tightly linked, and national boundaries are so insignificant that the conflicts in Sudan, the Congo, Iraq, and elsewhere are actually armed combat within the sovereign system of the globe.

Michael Hardt and Antonio Negri in their books Empire and Multitudes argue that "we are entering an age... in which war arises equally from outside and inside each society." This concept turns current foreign policy preoccupation with "failed states" on its head.

Obsessed as rich countries are with stabilizing the world's "failed and fragile states," the idea that these same rich countries are key causes of "state failure" is not on the table. In Ottawa, debates about Canada's proper role in such conflicts as Afghanistan assume an outsider's point of view. The question is always "should we be involved?"

If that's the question, Canadians will favor intervening. While we think of ourselves as a nation of peacekeepers, we will consider war if it seems the only way to end suffering. Canadians are spurred to action by mass rape, by child soldiers, mass killings, genocidal intentions, disruption of livelihoods, cycles of misery, and unforgivable poverty.

Thus many NGOs, academics and government officials have adopted the language and framework of "failed states," working to morph political attention into concern for the welfare of people suffering brutal conflicts.

But the actions of Canada and its allies in "failed states" are unlikely to advance the desires of activists to build a peaceful, disarmed, non-militarized, equitably developed world. When we ask and attempt to answer "how do we help stabilize these failed states?" we're asking the wrong questions.

In this global "war on terror," Northern governments have designated a number of countries as "fragile, failing, or failed." Officially, these are states unable or unwilling to control the use of force and deliver basic services to their citizens, and lacking legitimacy to govern effectively. In practice, most states that suffer violent conflict are considered "failed or failing," and "state failure" has become the new lingo for violent conflict seriously disrupting the state.

Countries considered "failed, fragile, or failing" range from Somalia (which in many ways is a stateless territory), to Iraq (whose government was brought down by the US forces that now occupy the country over the armed opposition of numerous Iraqis), to Sudan (which currently hosts several armed conflicts aimed at undermining or strengthening the current government), to Colombia (whose long-running civil war has been fueled by, among other things, the government's attempts to regain control), to Venezuela (whose government the United States considers illegitimate).

Canada is devoting significant attention and resources to these "fragile states," contending that they pose a dual threat to western nationals and to their own populations. CIDA, DFAIT and the Department of National Defence are pursuing a strategy that encompasses defence, development, and diplomatic resources, stresses stabilization through military force, and sees "state-building" as the goal of intervention in failed states.

Geopolitical factors have influenced this course. Shifting alliances between developed countries since the collapse of Cold War alliances have affected priorities for aid, diplomatic, and military resources. The attacks of September 11, 2001, for which Afghanistan was used, shifted security preoccupations away from the threats emanating from powerful states toward those emanating from weak states. This included a facile assumption that "fragile states" are breeding grounds for terrorist activity threatening North America -- an assumption that is demonstrably false.

The "fragile states" focus has helped to justify shifts in Canadian military policy by positioning these shifts within a global agenda that mixes humanitarian and Canadian national security concerns. The Canadian military is undergoing a major post-Cold War transformation, including significant new resources, inter-operability with the US military, and increased capacity for active combat in the world's crises. Its priority as a tool for international influence is growing. In this context, a foreign policy rooted in apparent concern for "failed states" is at least problematic.

It is true that there are states in which the government's control, legitimacy, and services do not extend much past the capital and these governments neglect their obligations to their citizens. Somalia, for instance, is a state without legitimate lines of authority, basic services for citizens, and where violence is commonplace. But the term "failed state" has come to encompass such a broad range of situations as to be meaningless.

The USAID list of "failed states," for instance, includes both Somalia and Venezuela. Whatever may be said about recently re-elected President Hugo Chavez, Venezuela is not a state in collapse; rather it is seen as a "problem government" for those who write such lists. Canada's list includes Colombia and Burma, which are neither weak nor fragile, but instead are strong anti-democratic regimes.

The use of the term "failed states" conflates the military security agenda of the West with the security needs of civilians suffering violence and injustice, the latter being used to justify the former.

Experience in Afghanistan is proving that military interventions shaped by the security agenda of the interveners are not the same as acts that will create security for affected populations. The focus on eliminating the Taliban and hunting al Qaeda conflicts with the need to protect people -- particularly women -- from security threats that go far beyond the Taliban and include other armed groups and local police.

Beyond the term itself, the "failed states" framework locates failure in the state itself. It ignores the interdependence of states and the negative impacts of donor-imposed conditions on aid, which promoted a reduced role for the state through neo-liberal policies.

During the 1980s and 1990s, the international donor community, particularly the US, World Bank, and IMF, minimized the role of developing country states by conditioning loans and grants on the reduction of state functions and social service spending. At the same time, the international community built a global trading regime that dismantled regulations and fiscal/economic controls, and empowered foreign private actors vis-à-vis states.

Currently, the global arms trade, the investment regime, and the global extractive industries, among other forces, are linked to the corruption and/or collapse of functioning states, to the eruption and perpetuation of conflict, and to the continued undermining of governance.

The Case of the Congo

The conflict in the Democratic Republic of Congo (DRC) is a case in point. Colonists had demarcated borders randomly, separating and joining groups without regard to ethnicity or allegiance. The aggressive de-regulation promoted by the World Bank and the IMF in the 1970s and '80s facilitated the rise of an unregulated mineral sector and undermined attempts at state-led development. Various international players now import guns through government organizations and armed groups. Trade agreements globally continue to undermine economic recovery. And the current conflict is perpetuated by ethnic alliances across borders in the region; by the illegal and legal mineral trades; by the weakness of the state resulting from extreme de-regulation during the '70s and '80s; by easy access to guns; and by the poverty and inequality that result from unfair trade rules.

The "failed states" frame ignores the international community's responsibility for the conflict and the weak governance -- past, present, and (unless things change) future. If we accept Hardt's and Negri's view that our world is an interconnected system, and that conflicts arise from both outside and within a society, then we will stop debating whether or how to get involved in the world's troubled areas. The international community is inherently involved, both in originating and responding to problems.

In using state "failure" as justifying intervention, Northern countries ignore these causal interconnections, and focus instead on their power to influence the future of the state in question.

In this "sovereignty vacuum," outsiders have a blank slate on which to design a new state and establish themselves as its inevitable arbiter. This means highly directive state-building, in which democracy and local ownership are the goal but not the means, creating challenges for both the legitimacy and effectiveness of such interventions.

The Case of Iraq

The case of Iraq is a tragic illustration. Post intervention, the US and the UN set about "re-building Iraq." While some ground-breaking projects have been undertaken in this process with great success, the re-writing of economic laws and policy (in many cases to accommodate the needs of foreign oil, water and construction companies and their governments) has been a scandal of unimaginable scale. The problems arising from this manipulation will no doubt lead to future unrest in a country forever marred by foreign occupation.

Framing the problem as "state-failure" identifies the solution as state-building and stabilization, not conflict resolution and reconciliation. The state is therefore situated as both the problem and solution. Priority is placed on strengthening institutions. Little attention is paid to the civil society aspect of workable democracy -- enabling citizens to build a state that fulfills their rights and then to hold it accountable.

In Afghanistan, the international community focuses on stabilizing the country by supporting the central government. Efforts at resolving the 30-year civil war through negotiation and peace agreement have been sparse. The Bonn Agreement, signed in the aftermath of the US-led invasion, was not a peace deal. It left out several major armed factions. Policy makers continue to view Afghanistan as a "failed state" rather than a country mired in violent conflict. Efforts at resolving that conflict have suffered as a result.

The "human security" agenda of the 1990s, of which Canada was a lead proponent, shifted the focus away from state-centered security, toward the security of people. The "failed states" agenda represents a return to more traditional, state-centric views of security threats and their solutions. While ultimately a state does require the capacity to meet its obligations to its citizens, the current policy directions for security in "fragile states" focuses too narrowly on state function.

Rather than asking whether we should be involved in a conflict-affected state, we should be asking how are we connected to the situation financially and diplomatically and how can we use our connections to stop the violence that concerns us. We might ask: how do we support rights and democracy?

Let's de-bunk the "military or bust" mentality around conflict. Let's end the false dichotomy of "Should we act or not?". Let's highlight the improbability of military solutions and the increasing frequency with which they are invoked.

Canada can lead by working to solve conflict by diplomacy, by supporting civil society, by targeted sanctions, by reformed trade and investment, and by responsible arms practices. It's the most practical, most effective, and most ethical way to approach global security. Prevent war rather than fight it.

Erin Simpson is a former policy officer with the Canadian Council for International Co-operation. The views expressed in the article do not necessarily represent those of CCIC or its members. 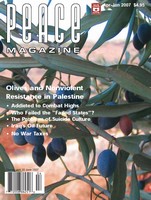 Search for other articles by Erin Simpson here