Ignoring Rwanda: From Genocide to Justice

A few feet away from me stands Tharcisse Muvunyi, former commander of the Rwandan military school Ecole des Sous Officiers (ESO). A tall, powerful-looking man, he seems younger than his 53 years, and has an air of authority and confidence in his grey pinstripe suit and red patterned tie.

"The 18 orphans were forced to lie down on the volleyball court, and were killed one-by-one," the judge tells him. "And you did nothing to stop it." Muvunyi stares straight ahead.

The judge carries on reading a litany of atrocities committed by the ESO under Muvunyi's command - rape, mutilation, murder. The courtroom and press gallery are silent.

When the judge tells Muvunyi he has been found guilty of genocide, direct and public incitement to commit genocide, and crimes against humanity, and sentences him to 25 years imprisonment, Muvunyi's face -- until now registering no emotion -- cannot hide his fury. He blinks hard, and purses his lips as if to stop himself from shouting out.

The gallery, however, is a whirl of English, French and Kinyarwanda - we want to talk about it; we want to get our stories out so everyone will know.

But as I step back into the empty halls of the court complex I sense a familiar feeling of isolation creep over me -- the same feeling I've had every day at the International Criminal Tribunal for Rwanda -- and I can't stop myself from wondering: does anyone even know this place exists?

The infrastructure of justice

For 100 days between April and July of 1994, Rwanda was plunged into a bloody and horrific genocide, in which Hutu citizens massacred Tutsis and Hutus who did not believe in their "Hutu Power" ideas.

The International Criminal Tribunal for Rwanda (ICTR) was established by the UN's Security Council on November 8, 1994, 3 months after the end of the genocide which left over 800,000 Tutsis and moderate Hutus dead.

The UN chose the Tanzanian town of Arusha as the location for the Tribunal, a bustling and somewhat ugly town, used by tourists mainly as a set-off point for safaris to Tanzania's national parks. The Tribunal is housed just off one of the main roads leading to the town center, in the Arusha International Conference Center -- a huge building made even more noticeable by giant satellite dishes and "No Photography" signs.

More than 800 staff representing 90 nationalities work at the Tribunal in Arusha and at a research centre in Kigali, Rwanda. Over 1,500 witnesses from all over the world have testified before the court.

Among those tried or awaiting trial include senior military leaders, high-ranking government officials, businessmen, priests, journalists, a musician, and one former prime minister, Jean Kambanda -- the first time a head of government has acknowledged his guilt for and been convicted of genocide.

The aim of the ICTR was to prosecute those who masterminded, organized, or funded the genocide. As of November 2006, 72 people had been arrested by the court, and 31 sentences had been handed down. The ICTR delivered the first-ever judgment of genocide by an international court, described by former UN Secretary General Kofi Annan as "a testament to our collective determination to confront the heinous crime of genocide in a way we never have before."

The work of the Tribunal, however, is not widely known. Bocar Sy, senior public affairs officer at the ICTR, explains that when the trials first began in 1996, the media center was packed with journalists from all over the world: "We used to have many press agencies housed here: the BBC, Hirondelle, Internews, they all used to be here."

The ICTR certainly has the resources to provide for the media. The complex houses a fully-equipped press center with work stations and high-speed internet access, a library stacked with books on international law, human rights and African history and video cassettes of every moment of every trial held at the court. It also organizes press briefings when important people visit, when trials start or when judgments are handed down.

But with only one permanent journalist left at the ICTR -- a reporter from Hirondelle -- and only a handful of freelancers present even when judgments are announced, these resources are woefully underused. "The media has less interest in what's going on here in the Tribunal, that is the problem," comments Sy.

Reaching out to the world

The ICTR, however, does what it can to encourage media organizations to pick up the story of Rwandan justice. Its excellent, if sometimes out of date, website (www.ictr.org) contains a wealth of information on the work of the Tribunal, and the status of detainees. The ICTR also issues regular press releases by fax or e-mail to those on its mailing list.

In addition, the ICTR has an outreach program, which aims to educate people about the work of the Tribunal and improve international legal awareness through training and seminars.

The ICTR acknowledges that the most important audience to communicate with is the diverse Rwandan public -- from people with little access to education and modern forms of media, to academics and legal practitioners.

The ICTR has established, in partnership with the national university of Rwanda, research awards for Rwandan law students. The Tribunal also flies -- on UN planes -- up to six Rwandan journalists at a time to Arusha to report on important events such as trial openings and judgments.

Radio is the most widely used form of media in Rwanda (used to horribly effective use during the genocide), so many journalists brought to the ICTR come from Rwandan radio stations. Judgments are also broadcast live in Rwanda via a link-up between the ICTR and Radio Rwanda, and radio and television journalists can be provided with audio or videocassettes of any hearings to broadcast to the country.

In 2000, the ICTR established an information center in Kigali, which has become the focal point of its outreach program. It contains a library, and provides the latest updates from the ICTR in Arusha. It receives around 100 members of the Rwandan public every day -- mainly students and researchers. In the near future, the ICTR plans to provide a live television link-up between itself and the information center during judgments, so the Rwandan public can watch the sentencing from Kigali.

The ICTR is now working on educating those not based in Kigali, by distributing information from the center in Kigali to around 100 institutions around the country, and by conducting awareness-raising workshops in all Rwandan provinces. It also plans to open new permanent information centers in other locations across Rwanda which will, among other things, show documentaries about the Tribunal.

According to the ICTR, these education plans have myriad aims: to ensure Rwandans understand and have confidence in the Tribunal, to help with the process of national reconciliation, and to assist with unraveling the devotion to authority that was one factor in so many people taking part in the genocide. "[We want to] show Rwandans that the planners of the genocide are being tried, sentenced and punished by the tribunal," ICTR literature states. "Consequently, they will no longer follow orders blindly if they are able to see the genocide leaders being convicted and their ideology refuted by the international legal community."

For the rest of the world, the ICTR broadcasts a weekly round-up and a summary of all important events over its satellite (in English and in Kinyarwanda), which can then be picked up by any news agency free of charge.

When asked how often these broadcasts are picked up, or how often a news agency mentions the work of the ICTR, Sy acknowledges that he does not know: "I'm working on researching into that, but our infrastructure here is not very developed. We're not in a big city like Nairobi, so we don't have many resources to reach out and communicate with the rest of the world."

It seems a tragic shame that a genocide that was so ignored by the rest of the world, now that some of those responsible are being tried, is still not getting the attention it deserves. This may be due to a lack of ability of the ICTR to push its story out, it may be because our attention span is too short to engage with trials for crimes committed over a decade ago, it may be because the media is dominated by atrocities which are being committed on a daily basis.

But, most depressing of all, it may be because it is easier to forget about the genocide than deal with difficult questions about human nature and its capacity for evil. When leaving the ICTR after Muvunyi's sentencing, I stop by the coffee shop about 100 meters from the courtroom and chat with the barista, Susie, a Tanzanian woman in her twenties.

I ask her if she knew there was a judgment being handed down today. "No, what happened?" she asks excitedly, and I have her full attention while I tell her: 25 years for terrible, terrible crimes. "Oh, that's sad," she says, not really listening as she turns away.

Caroline Thomas is a journalist based at UN headquarters in New York. 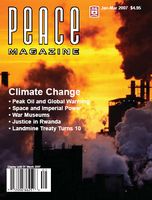 Search for other articles by Caroline Thomas here