The return of the three Christian Peacemakers after months of captivity brought out the best and the worst in our attitudes to war and peace.

Truth, the usual first casualty of war, was systematically slaughtered long before the first missiles found targets in Iraq. Yet some unusual persons, members of a Christian Peacemaker Team (CPT) stayed in Iraq to face power with truth, to pursue justice in the midst of an illegal war, and to send back almost daily reports on the lives of civilians during the occupation. The kidnapping of four and subsequent safe return of three of those Christian Peacemakers after four months of captivity triggered expressions of the best and the worst of our attitudes to the attack on Iraq and its subsequent occupation.

In November, 2005, Jim Loney, Harmeet Singh Sooden, Norman Kember and Tom Fox were taken hostage by the group calling itself Swords of Righteousness Brigade, probably thugs hiding behind religious fervor. The captors set conditions and deadlines for their release, but each deadline passed. Christian, Islamic, and secular human rights activists appealed to the captors to understand the dedication to peace of these hapless captives, who were supporting the victims of the attack on Iraq.

The discovery of the executed body of the American Quaker Tom Fox on March 9 added tension. Later the other three were found by British soldiers, chained, but alive, perhaps having been abandoned by their captors.

There was a great chorus of thanks and relief. Much of the rejoicing was because faith and virtue had in this instance shielded the lives of three of these anti-war individuals. This outpouring was general and generous, another blow to the dishonesty that had precipitated the war on Iraq. But the media attention was noticed by the supporters of the war. Critics jumped on the failure of the survivors to praise the military forces that had rescued them, an understandable oversight, later corrected. The fact that the military was the instrument, though not the cause, of the chaos in the first place could not have been far from their minds throughout their detention.

On March 25, when the freed hostage James Loney was being flown back to Canada, two columnists in the Globe and Mail attacked with venom. Margaret Wente had, in the build-up to the attack on Iraq, assured us that she had personal informants to vouch for the massive quantities of weapons of mass destruction in Iraq. Apparently she has not found those weapons yet, nor has she admitted that her war mongering was misguided. She has no time for peacemakers, whether they are trying to stop Israeli bulldozers destroying Palestinian homes or assisting Iraqi civilians to get just treatment from occupying forces. She sums up peacemakers with, "Just as Lenin and Stalin had their useful idiots - Westerners who defended Russia and denounced the West - so did Saddam and so does Hamas."

Rex Murphy concentrated on the failure of the CPT to acknowledge instantly the superior effectiveness of the military rescuers. He rails at them for seeing the war as the first cause of the evil raging on in Iraq, rather than pinning the blame firmly on the kidnappers as the real malevolent actors. He acknowledges nothing good in the peacemakers' efforts.

Tony Burman, editor-in-chief of CBC News, responded to these cynics. Most Canadians, he argued, "not only felt genuine relief and happiness about the rescue but...saw in these 'peacemakers' something that was quite admirable, courageous -- and classically Canadian. A desire to get involved. To help out. To make a difference even if it involves real personal risk."

He also notes that "many saw in the actions of this group...something that was part of a history of peaceful Canadian involvement in the world. Not military conflict or conquests, but peacemaking and peacekeeping. Perfect? Of course not. But constructive and honorable? Yes."

Burman concludes: "Thank you, Mr. Loney, Thank you for being part of the Canadian idea that this world will become a better place only if each of us does our bit in the best way we can. And you certainly did that. Welcome home."

The Christian Peacemakers are not alone in pursuing peace and justice in conflict zones. For 25 years the secular Peace Brigades International has conducted nonviolent activity in conflict-torn countries, but they avoided Iraq, deeming the situation there too dangerous and unstable.

Lyn Adamson explained in the Toronto Star, March 29, why peace teams risk their lives in areas of conflict. She recalls that Mahatma Gandhi had suggested a peace army using nonviolence. She herself served with Peace Brigades International, which provides an international presence to stand by local human rights activists whose lives are at risk from death squads. Because armed groups pay a diplomatic price for harming internationals, peace team members can confer some safety through their presence, with limited risk to themselves. This, alas, does not hold true in the chaotic occupied Iraq.

Adamson points out that CPT gave an effective voice to Iraqi civilians. Team members reported what they learned to the larger world, including documenting the abuses in Abu Ghraib prison before this became a major story. They also told the world about the 14,000 Iraqis detained without due process.

Adamson considers the CPT's most important impact in Iraq to be its message to Iraqis: There are internationals who are working to get the word out about what you are suffering. They are doing this through nonviolent means and they are taking risks. Many Iraqis have been moved by their presence, and the CPT's work has encouraged the formation of a Muslim Peacemakers Team, which is working at bridging the Shia-Sunni divide.

Adamson's argument concludes: Active nonviolence has transformed conflict in many places. Lives have been lost in these struggles. These must be measured against the gains achieved. Ultimately society must put an end to war. To do so we must build a culture of peace and respect for human rights. We cannot attain this by staying inside a bubble of safety. Taking risks will be necessary. We all know too well the devastation of war. We need to support the development of nonviolent alternatives. Courageous nonviolence in peacemaking and peacekeeping should be the focus of our commitment.

By Ron Shirtliff, member of the Peace Editorial Board 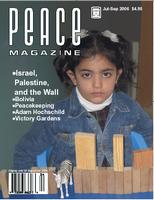